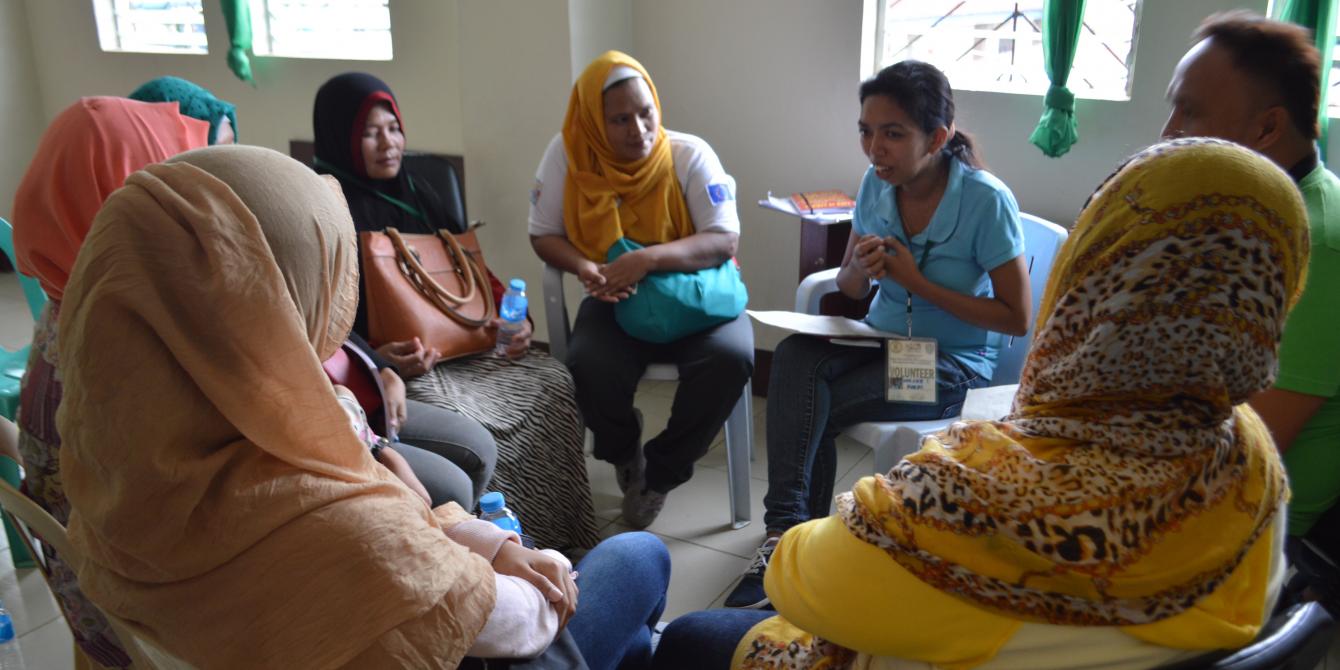 When humanitarian workers from nongovernmental organisation United Youth of the Philippines-Women (UnYPhil-Women) visited evacuation centers outside Marawi City after armed clashes in the southern city erupted, they discovered that most of the people managing the camps were displaced by conflict themselves.

“They told us: ‘Even if we are evacuees, we can still give.’ But they are overburdened. They are war survivors and yet they are still offering their services. So the tendency is they forget their own welfare,” said UnYPhil-Women Executive Director Noraida Abo.

UnYPhil-Women, one of Oxfam’s local NGO partners for the Marawi response, is conducting counselling sessions for people who are volunteering to serve their fellow evacuees in the towns of Balo-i and Pantar in Lanao del Norte, as well as Saguiaran in Lanao del Sur.

The sessions provide camp managers with templates, which they can use to extend similar mental health or psychosocial services to people dealing with conflict trauma, especially those living in evacuation centers. As of the second week of July, over 400,000 people have been displaced from their homes as armed clashes in Marawi City entered its second month.

“We help them process why this conflict happened and why their situation is like this. We help them release any pent-up emotions to prevent outbursts. The sessions are meant to alleviate their anger and make them understand the situation. This way, we open the road towards healing,” Noraida said.

Select areas in the southern Philippines has been in conflict for five decades but the situation in Marawi City is unique. Noraida said this is the first time people living in an urban area were forced to flee their homes. Unlike certain rural areas in the nearby province of Maguindanao and the island province of Basilan where people have been suffering from protracted clashes due to intermittent armed clashes over the decades, Marawi City had been largely spared from widespread clashes and mass evacuations – until May 2017.

This makes trauma support a vital need in this situation.

“Up to now people are still afraid, especially because this is the first time this ever happened to them,” Noraida said.

“Usually, Marawi City hosts evacuees from adjacent municipalities. This time around, it’s the entire Marawi City that has been evacuated. Our Maranao brothers and sisters from Marawi City are not used to this kind of situation,” she added.

Noraida said: “In one evacuation center, we spoke to a grandmother who told us that this is the first time that she experienced fleeing from her home. She was not able to bring anything except for the clothes on her back. This is a common experience for many of our brothers and sisters from Marawi.”

Aside from their “Care for Carers” initiative, UnYPhil-Women has also been providing play therapy sessions and light feeding for children displaced by conflict.

“It is one way of answering their questions about why they had to leave and can’t yet return to their homes,” Noraida said.

In all the sessions, whether for the young and the old, most of the evacuees have one answer when asked what would make them happy: to go back home.

It remains uncertain when that would happen. For now, the work continues.