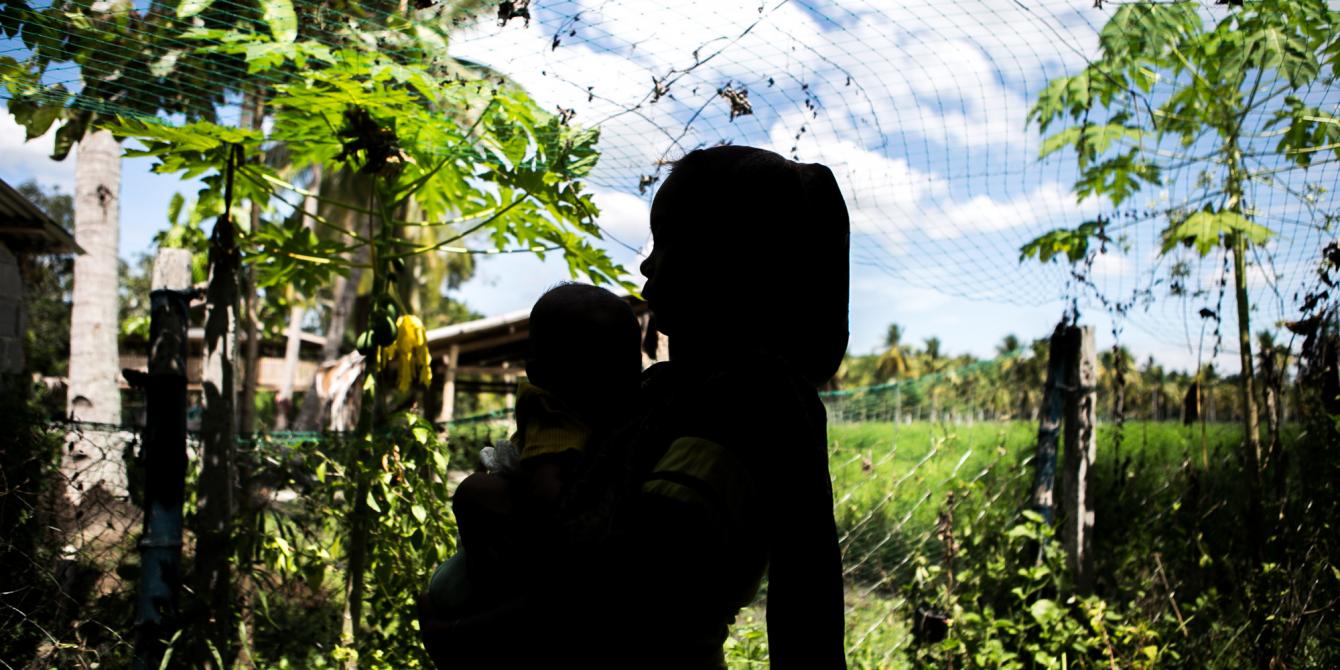 Lady (not her real name) and her baby pose for the camera in this photograph taken in February.
(Photo credit: Mark Saludes)

This article is originally posted by Mark Saludes at Licas News, 20 May 2020: https://spotlight.licas.news/pandemic-worsens-situation-of-young-mothers-in-conflict-areas/index.html

“It would have been easier for Lady (not her real name) to make it through the lockdown due to the coronavirus pandemic if she did not have to worry about bullets and infant milk.”

Lady was at her wits' end trying to think of ways to console her child who had been crying because of hunger and gunfire noise.

On the night of April 16, two civilians were hurt after armed men attacked a military detachment in Madia village in Datu Saudi Ampatuan town in the southern Philippines.

"I am used to the sound of gunshots," said Lady, "but the baby is not."

She said she can endure a day without food "but I can’t stand seeing my child in this condition."

Her veil did not hide the misery on her face. Her eyes spoke out in despair as she recounted how she survived with her husband’s US$1 daily income before the pandemic.

When the government declared a lockdown, Lady's husband lost her job at the market.

"Aid from the government does not come that often," she said. She has been receiving a kilogram of rice per week since the start of the lockdown due to the pandemic.

It was not Lady's dream to marry a man six years older than her last year.

She was 15 years old when she ran away with the future husband she met in a small eatery where she was working after graduating from grade school.

"I got tired of working to earn and to contribute to the family. I wanted a break from it," she said.

Her parents were left with no choice but to let the young girl marry, with one condition: That the couple would stay with Lady's family.

The family has been living in a temporary evacuation camp in Maguindanao province after the armed conflict in the region forced them to leave their homes. It became their permanent residence since 2010.

"Life has been so hard for us. I don’t have memories of a peaceful and abundant life," said Lady.

She was 4 years old when the family first fled their village due to a firefight between government forces and Moro rebel fighters in 2008.

"The soldiers burned our house," she said.

Her family is among more than 100 displaced families in Madia, a poor village in Datu Saudi Ampatuan town.

"No one was able to go back to our old village. Everyone is stuck here," she said, referring to the evacuation camp in the middle of two military detachments.

"There is always a firefight," said Lady. "War has become a common occurrence here."

Antayan, Lady’s mother, who harvests and sells water spinach for a living, admitted that poverty compelled her family to make "hard decisions" for the children.

A few months after Lady’s wedding in 2019, the family arranged another marriage.

Baimanot, the 16-year-old sister of Lady, was to be wed to a 45-year old cousin.

After the wedding rites, Baimanot escaped. She only resurfaced after realizing that she had "no choice" but to accept her fate.

"If I only have an option, I will not marry a man older than me, who is also my cousin," she said.

"I never made a decision for myself. I wanted to study but [my parents] could not send me to school," said Baimanot.

The young girl never experienced going to school or even traveling outside of town. Today, she lives in a shanty in the same compound where her displaced family continues to stay.

The early marriages of the two sisters were not the first in the family.

"My eldest daughter married at the age of 13," said Antayan, the mother.

Norhanie, now 18, also lives in a shanty beside her parents’ hut. She has two children after one miscarriage, which happened after a bomb hit the evacuation camp.

"The bomb exploded two houses away from where we were staying. We immediately fled but I did not notice that I was already bleeding," she said.

Women and children in places with pre-existing humanitarian crises are plunged into "extreme conditions" during the coronavirus pandemic.

She said internally displaced persons were able to make a living before the pandemic "but because of the lockdown many of them are trapped at home."

Mercado noted that delivery of aid from various humanitarian agencies has lessened or stopped due to travel restrictions.

She said people in conflict areas are left with nowhere to go.

"Most of the people in communities that were hit by natural or human-induced disasters face hunger and uncertainties amid the coronavirus pandemic," said Mercado.

According to the Center for Women’s Resources or CWR, there were 16.02 million “economically insecure Filipino women” even before the pandemic.

CWR media and advocacy officer Edz dela Cruz said women in poor communities, especially in crisis-stricken areas, “were the first to be disenfranchised.”

An estimated 12.17 million Filipino women in formal and informal sectors are impacted by displacement due to work stoppage or loss of livelihood since the outbreak started.

“The condition of women and children in conflict areas is relatively harder. Access to all forms of social services is already hard with or without the pandemic,” said Dela Cruz.

Dela Cruz, however, said that there is “no comprehensive study yet” that indicates the total number of affected women and children due to lockdown specifically in conflict areas.

The pandemic makes women and children “more vulnerable to all forms of violence including structural violence” in places where there is a pre-existing humanitarian crisis.

“One major example is the sexual reproductive rights of women. Access to reproductive health services is disrupted in a conflict zone, more so, during a pandemic,” she said.

On May 5, various women's rights groups called for “the inclusion of reproductive health commodities,” such as menstrual health items and contraceptives, in relief packages distributed during the COVID-19 lockdown.

The groups also called for the “availability of comprehensive sexual and reproductive health services such as the continuity of post and pre-natal care, and information to reduce unsafe and unhealthy sexual practices.”

"does not have to put our women population at risk twice over with the virus and unplanned pregnancies."

“Family planning reminders, counseling, needed supplies, and quality services cannot and must not be left behind in the time of COVID-19,” she said.

In July 16, 2018, at least 1,607 indigenous people from 15 communities within the Andap Valley Complex flee due to alleged military abuses.

A lot of internally displaced people due to armed conflict are women and children.

In 2019, the Commission on Population and Development declared a “national social emergency” after the Philippines recorded at least 196,000 girls and young women between the ages of 15 and 19 years old getting pregnant each year.

The 2017 National Democratic Health Survey showed that one in five girls is a mother by age 19, and two-thirds of women are not using any form of birth control.

Twelve women’s rights groups, including Oxfam in the Philippines and FriendlyCare Foundation, are currently working on a project aimed to improve the access to sexual and reproductive health and rights information and services of 85,000 people across 13 provinces in the country.

The recurring armed conflict in many villages in Datu Saudi Ampatuan town has resulted in the prolonged displacement of hundreds of Moro families.

The United Nations Office for the Coordination of Humanitarian Affairs or UN OCHA reported that there were at least 336,837 internally displaced people in Mindanao due to natural and human-induced calamities as of Feb. 19.

About 120,000 people were displaced because of armed conflict between state and non-state forces. The province of Maguindanao has at least 43,600 internally displaced persons.

At least 32,000 of these displaced people are staying in 22 evacuation centers in four municipalities in Maguindanao province, including Datu Saudi Ampatuan town that has 10,540 internally displaced persons.

"A lot of displaced families are rotting in evacuation camps while the local economy deteriorates," said Guiamelan Sajutin, leader of the displaced women in Madia village.

Sajutin told LiCAS.news that the presence of armed groups disrupts the economic activities and limits the entry of potential businesses that could give livelihood to people.

The 40-year-old community leader said a lot of farmers in the area cannot anymore till their land because of armed encounters.

Sajutin decried the lack of government support to displaced families due to armed conflict during the implementation of the enhanced community quarantine due to COVID-19.

She claimed that “no one” from her village received the promised financial aid to help poor families cope up with the impact of the lockdown.

The Department of Social Welfare and Development said on May 17 that more than 17.1 million beneficiaries of the 18 million low-income households targeted to receive the Social Amelioration Program emergency subsidy have already been served.

Under the Bayanihan to Heal as One Act, the targeted low-income households are entitled to receive emergency cash assistance ranging from US$100 to US$157 for the months of April and May.

Sajutin said there are at least 30 young mothers who belong to the poorest families in Madia village but “they are not included in the SAP beneficiaries.”

According to government data, there were an estimated 665,597 households in the Bangsamoro Autonomous Region in Muslim Mindanao.

Displacement in Time of COVID-19 and Ramadan

On 27th May 2020, COM, UNYPHIL-Women, and IDEALS, Inc. provided psychological first aid (PFA). PFA aims to provide psychological support to ensure the mental need of the survivors, especially children, are addressed. The team also distributed water kits, and hygiene items to ensure that 348...