Back to the sea: The Seaweeds Farming Project in Bantayan, Northern Cebu

Next to deep-sea fishing, seaweed farming is one of the main livelihoods in the island of Bantayan located in Northern Cebu. After typhoon Haiyan, almost all seaweed farms were wiped out to the sea, causing many women and men seaweed farmers to find alternative sources of income. (Photo: Genevive Estacaan)

Our life is better now, because we have some cash we can use whenever we need it. I learned that during disasters, we can easily take out the seaweeds because we use the iron bars. I know better now.
Gerlie Rebamonte, 26

Gerlie looked at her hand filled with dried seaweeds and remarked “Now, I know better”. At 26 years old, she felt like she has already been through the worst in life.

When Typhoon Haiyan struck her small town in Bantayan Island, she barely had anything left, save for a broken pumpboat which they used as temporary shelter where she, her husband, and their one-year-old child sought refuge. Their wooden house and boats were washed away to the sea. Her seaweed farm, which used to lay on vast stretches off the island’s coast, all gone. However, help came in after months in the form of Oxfam’s Seaweed Project. “After the typhoon, only two lines of seaweeds were left out of more than a hundred. We lost around 40,000 Pesos (893 USD). We did not expect that we can go back to seaweed farming, and even expand our business!”

At the northern tip of the island of Cebu lies Bantayan—a group of islets inhabited by over 135,000 people. Of this, around 70% engage in fishing and seaweed farming. Seaweed farming is a common livelihood in the area offering a viable means of earning additional income, and is easy to manage. Although seaweed farming is usually a family affair, most of the tasks involved in maintaining the farm are done by women who are left at home, while the men go out to the sea to fish or carry on manual labour around the island.

But although it has been a long practice, most of the people have limited knowledge on seaweeds culture, and their farms remain to be prone to various diseases. They are also vulnerable to weather changes and disasters, and this became more salient after seeing how the typhoon washed out their livelihoods. Seeing this situation, Oxfam took the initiative to help these seaweed farmers by providing them start-up capital and facilitating community-led training on seaweed culture.

Initial livelihood assessments were conducted which led to the identification of five Barangays to pilot the seaweed farming project in Bantayan. The project covered three municipalities namely Santa Fe, Bantayan Proper, and Madridejos. Before Haiyan, all these municipalities had active seaweed farmers, but some got discouraged along the way because they lack knowledge on how to save their seaweeds from diseases such as the “ice-ice” (where seaweeds harden and turn into white like ice due to changes in water temperature), and water epiphytes (small hairy algae that attach themselves to the seaweeds, stunting their growth). The consultation revealed that there were many technical problems in their farming strategy, which led to the disease. They also learned that farmers were using substandard materials which will not withstand the changes in the sea climate, and even future typhoons. This made the people excited because, finally, they can start their farms again. Also, they were curious of the new techniques, and wanted to know more so they could improve their practices.

In order to ensure the quality of the programme and the commitment of the community members, Oxfam set forth some criteria which helped them identify the vulnerable beneficiaries such as seaweed farmers whose 60% of livelihood depend on seaweed farming and those who come from single headed male/female households. Seaweed farmers commonly engage in other business or work such as fishing, carpentry and vegetable farming. They only need dedicated time everyday to maintain the farm.

Even though seaweed farming is a family affair, most of the daily tasks in seaweed farming were done by women. However, it is usually the men who initiate the process by installing the module which serves as the plot on the seabed. This requires them to dive deep down the water at around five to10 feet. The women, on the other hand, cut and prepare the tie line made up of nylon cord, and tie the seaweeds carefully, lest they fall on the seabed once taken out to the sea. Each tie line can carry up to 160 seaweeds, each at around 100 grams. After the cutting and tying, the women along with their husbands will bring the tie lines to the sea and attach them to the module. This too requires going underwater. But everyday, the women go to the sea to clean the seaweeds. This process requires them to shake the tie line to rid off the dust clinging on the seaweeds.

In Bantayan Island, the farmers’ practice was to harvest every 15 to 30 days and immediately dry them, or sell to other farmers as seedlings. Most cannot resist doing this because they need to provide for the daily needs of their family, and send their children to school. However, the ideal time to harvest seaweeds is between 45 to 60 days to allow them to grow larger and heavier when dried. During the harvest they gathered from the tie lines by women, and carried to the shore by men. Dried seaweeds could be sold at 55 to 60 Php (1.30 USD) per kilo. They usually sell it to the local buyers in the market. Wet seaweeds are sold as seedlings at 20 Php (0.45 USD) per kilo. A 30-meter seaweed line could carry around 60 to 100 kilos.

After the assessments, Oxfam was able to identify 700 beneficiaries from all three municipalities of Bantayan Island. Each selected beneficiary was asked to join a half-day seaweeds farming orientation conducted in partnership with the local government unit particularly the provincial Bureau of Fisheries and Aquatic Resources (BFAR). The sessions tackled basic details about seaweed farming such as seaweed classification, proper farming conditions, common problems and solutions, and proper seaweed harvesting among others. Oxfam also took the chance to share about how to make their farms resilient against changing sea climate (rising sea temperature) and natural disasters such as typhoons. “At first, the people did not understand why their seaweeds dissolve in the water, and why it caught epiphytes. After the training, they learned that it was because of the high temperature of the water” explains Alex Acuňa, Livelihood Officer from Oxfam.

Each seaweed farmer who completed the training was given cash support amounting to 9,000 Pesos (201 USD) which they used to buy seaweed implements such as the metal module, nylon cord, floaters, stainless steel knives and seaweeds seedlings. Cash assistance was delivered through Cash Transfer Services which was commissioned by Oxfam in Northern Cebu. The farmers were required to present valid IDs, or Barangay Certification, and to some who had neither, claim stubs bearing their names.

Aside from the orientation, a two-day training on advance seaweed farming was held, involving a total of 48 seaweed technicians from more than 20 Barangays. These people were trained to be local experts in seaweed farming who have the capability to teach their fellow seaweed farmers advance knowledge in seaweed farming, using the local language. Each represented Barangay were given training materials such as visual aids and flip charts on seaweed farming as well as a refractometer (an apparatus to know gauge water salinity). Each set amounted to 6,000 PhP (134 USD) per Barangay.

During the roll-out of the community orientations, the local technicians not only reached out to the farmer beneficiaries but also to those who were not part of Oxfam’s programme. Each orientation lasted from 2.5 to 3 hours. People were greatly influenced by what they learned because what Oxfam taught had scientific basis. Using the local language was also a very effective means to communicate each lesson to the local farmers. “When you touch the heart of the person you are talking to through the words you say, they will appreciate it more. If not, it would be a waste because they do not feel it. If you have the same language, they can feel what you want to say, and you can convey your message effectively.” (Alex Acuňa, Oxfam)

After the first harvest, some of the seaweed farmers sold a portion of their harvest so they can earn some cash to use in the rebuilding of their houses. Others opted to re-plant the initial harvest. One of those who replanted the first harvest was Gerlie Rebamonte, 26 year old from Barangay Sillion in Santa Fe. Gerlie shared:

“We were able to buy materials, and even expand our seaweed farm. Now, I have more than 200 lines. Before, I only had 100 lines. All in all, I have benefitted around 26,000 Pesos from the sales. I have sold all our harvest from April to August. We also expanded and got a permit. We were the first one to get a permit. We were also able to buy Orocan (plastic container) and plate racks and cups because they were all destroyed. ”

Aside from the individual beneficiaries, Oxfam also formed livelihood groups which focused on seaweed farming. A total of three groups were formed, of which, two were in Santa Fe and one was in Madridejos. Each group was given cash grants which they used as start-up capital as well.

"Our life is better now, because we have some cash we can use whenever we need it. We also have pigs. The business will thrive is you take care of it. You will also have more income. If you are decided, it will really grow. I also learned that during disasters, we can easily take out the seaweeds because we use the iron bars so not all will be washed out. We spent money on the iron bars, it is very important. I am grateful to Oxfam because if not for it, we cannot recover our livelihood. I am thankful for Oxfam for all the good things that happened to us."

All the trainings were coordinated with the BFAR as well as the Department of Agriculture (DA), and are aware of the presence of the seaweed farming technicians. These LGU partners were also present in the trainings, and were considered as mentors of the local “experts” who can work hand-in- hand with them in the local Barangays. The LGU has also benefitted from the training, as they were able to gather new knowledge from the sessions, and were able to exchange solutions and good practices with the community members.

During the training, the participants were also encouraged to formally register themselves and their businesses in the municipality. It is important to register the farms under the Fisheries Code of the Philippines once a farmer is utilizing marine resources to be legitimate fishermen or seaweed farmers. This way, they can be able to contribute to community development through taxes, as well as legalize their ownership of their seaweed farms. This is also a requirement so they can avail of the insurance allotted for them by the government. Only a few know about this, and some of those who know do not put value because they were not aware of the benefits.

Some of the challenges and Lessons Learnt

The seaweeds enterprise project in Sitio converse, Barangay Ngolos is Oxfams very first communitylevel partnership with a people's organization in the municipality of Guiuan. Copyright by Maria Carolina Bello/Oxfam... 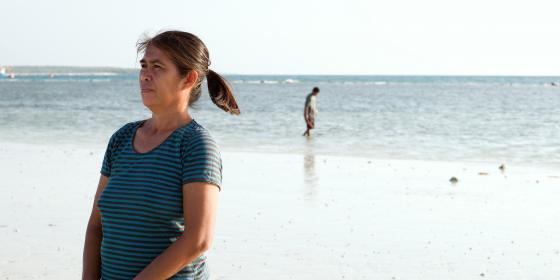 Imelda's hope: getting back what was lost

Fishing families who lived in the path of the typhoon have lost boats, nets, and tools; the essentials they need to produce food and earn a living. Coral reefs have also been badly affected by the storm. Oxfam is working with fishing communities to rebuild boats and repair nets.