Imelda's hope: getting back what was lost 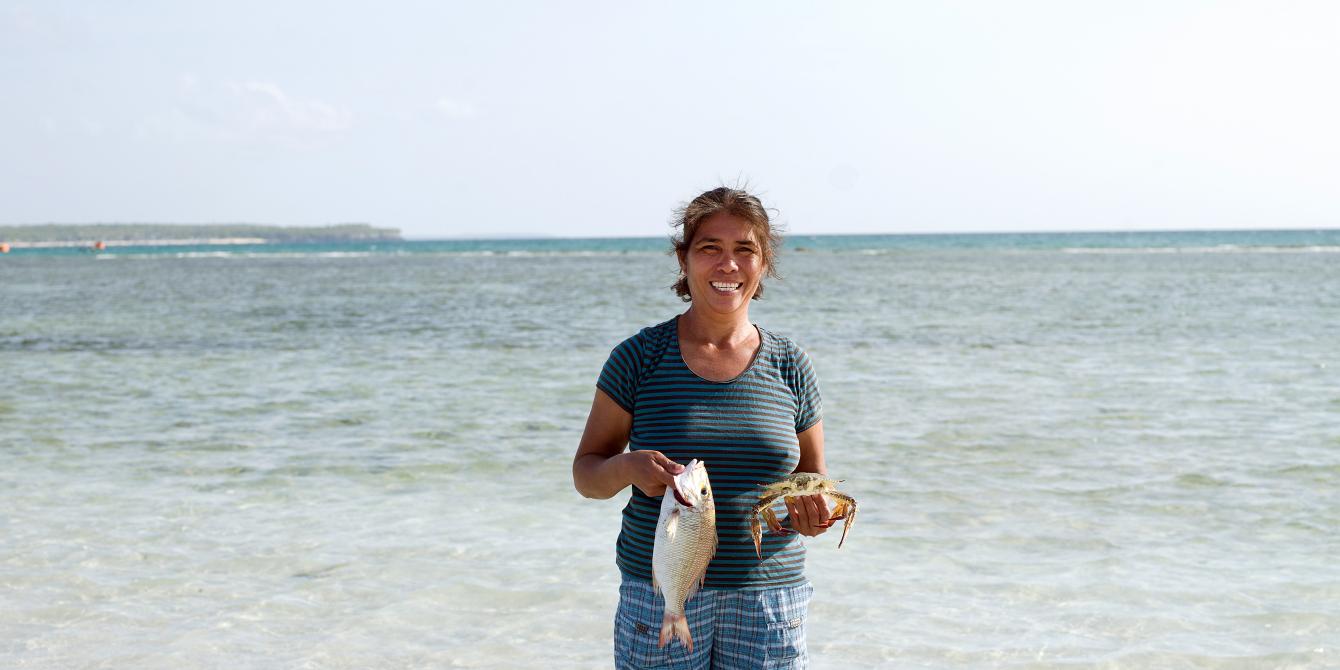 Fish Saleswoman Imelda Esgana from Santa Fe, Bantayan Island earns her main income selling fish. However, after typhoon Haiyan swept her island town, there were no more fish to sell, and even her boat was destroyed. But thanks to Oxfam's boat repair project, she is slowly getting back her livelihood. (Photo: Tessa Bunney/Oxfam)

After Yolanda, there was nothing to sell; the boats were all destroyed. Slowly the fishermen are getting fish. I have no capital now, so I pay the fishermen after my customers have paid me for the fish. The fishermen trust me.
Imelda Esgana, 47

“After Yolanda, there was nothing to sell; the boats were all destroyed.”

Fishing families who lived in the path of the typhoon have lost boats, nets, and tools; the essentials they need to produce food and earn a living. Coral reefs have also been badly affected by the storm. Oxfam is working with fishing communities to rebuild boats and repair nets.

Boat repair stations have been established in 14 barangays in Bantayan. By the end of February 2014, the team had repaired a total 660 boats across the Bantayan Island, as well as some part of Daanbantayan at the norther tip of Cebu Island. All boats repaired were then registered for insurance. These activities were part of Oxfam's Cash-for-Work programmes to help those whose livelihoods were wiped out by typhoon Haiyan have access to food and other basic items and to restore lost livelihoods. The programme was designed to provide people with a much-needed income by paying them to help clean up typhoon-affected areas and rehabilitate community facilities.

In Bantayan, the programme supported 12,000 families in 15 barangays and was implemented in two rounds: the first lasting 5 days and the second lasting 10 days. Objectives included clearing debris to ensure the safety of the community; prioritizing clearance of water, health and sanitation facilities; and clearing public spaces including roads, schools, and health centres. Workers were paid the regional minimum wage and were provided with protective gear and basic equipment including wheelbarrows, spades, and cleaning materials.

Imelda lives in Santa Fe, Bantayan Island. Her house was destroyed and her boat was damaged by typhoon Haiyan. She separated from her husband in 2013 and now looks after her five children alone. She is lives in her sister’s house and manages several jobs so she can earn enough money to feed her children. “I started selling fish when I was 16. I got married when I was 24. My fellow men describe me as helpful, they want me to be involved in politics, but I can’t. I want to be involved in politics to help others. But I can also help others being a simple person.” 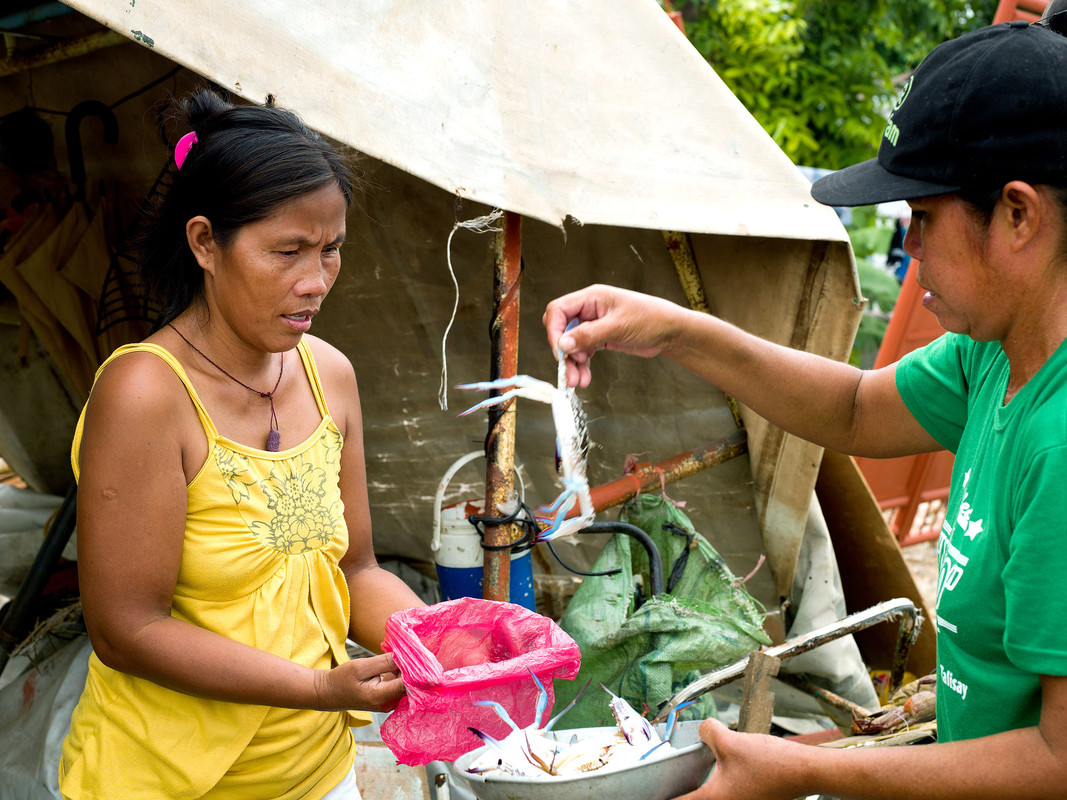 On the day of the typhoon, Imelda was having breakfast with her children. “We knew the storm was coming, but very early that day there were no signs of it. The winds were sudden and incredibly strong. I was so scared. I told my children we had to stay together. If we were going to die, we would be together. It’s the first time I have experienced a storm strong enough for coconut trees to fall down and for the roofs of houses to lift off. After Haiyan, there were concrete houses on the floor. My house was totally destroyed.” 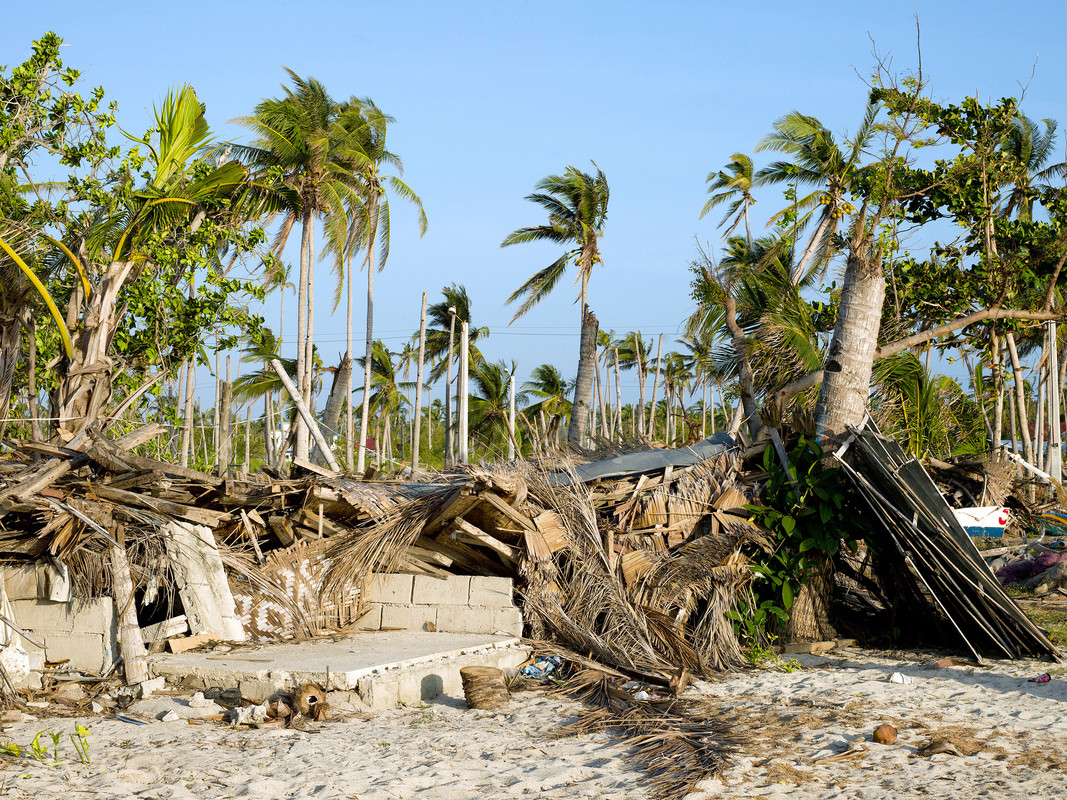 “It’s not the usual path of typhoons. The last typhoon was in 2012. During typhoon Frank the coconut trees fell down, but Yolanda destroyed concrete. It was stronger than Frank. My first experience of anything like it.”

“My boat was crushed by a coconut tree. It’s going to be fixed by Oxfam tomorrow. My fish drying nets were also destroyed. Normally I dry the fish that I cannot sell fresh, to preserve it to sell later. I don’t have my equipment now and the catch is lower, so now I’m just selling fresh fish.”

To support fisherfolks like Imelda, the Government has set up the Municipal Fisherfolk Registry (MFR). The MFR is updated annually and is designed to ensure that fisherfolk can easily access government support programmes, including post-disaster support and livelihood projects.

Imelda earns her main income selling fish, but has additional jobs to supplement this salary so that she has enough to buy food and items for her children. Imelda gets up at 4 AM every day so that she can carry out her work and look after her children. Alongside selling fish, she works as a part-time caretaker and collects shells to make jewellery. Imelda also volunteers as a Barangay Health Worker and she looks after two pigs and a vegetable garden. She earns 250-300 PHP (6 USD) per day.

“After Yolanda, there was nothing to sell; the boats were all destroyed. Slowly the fishermen are getting fish. I have no capital now, so I pay the fishermen after my customers have paid me for the fish. The fishermen trust me. There are fewer women selling fish now. I am doing it alone for my children. I don’t sell the fish at the market because I cannot leave my children. Instead I sell the fish locally by going from house to house. I am afraid I will be transferred to the mountains, because my source of income is here by the sea."

Imelda was selected to be one of the Cash for Work Team Leaders. She used the money she earned to buy building materials. “I am currently living with my children in my sister’s house. A coconut tree fell through the roof of my sister’s house. We repaired the roof through Oxfam’s Cash for Work. We used some of the money to buy nails and GI sheets. We started CFW during the first week of December. We cut fallen coconut trees, cleared the coastline, cleaned gardens, and the well and did ‘beautification’ work. I helped to manage 50 people – I can handle it! The men feel comfortable having a female team leader. They know I do it for our own good.” 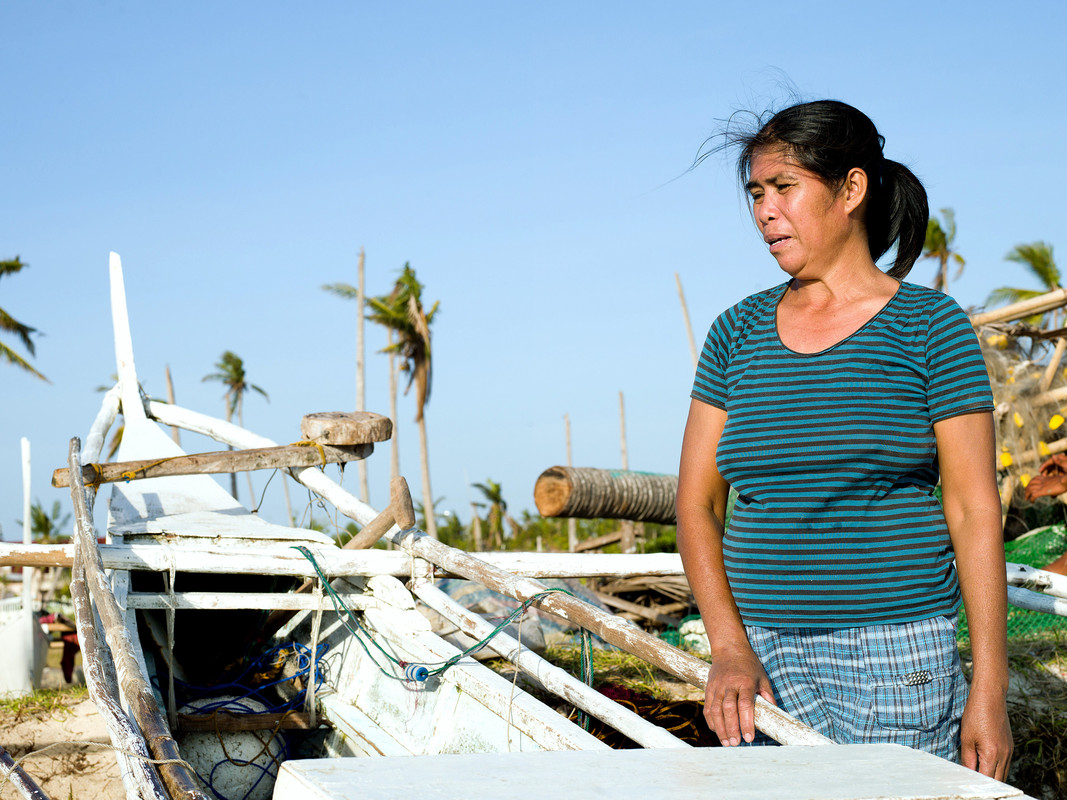 Now, Imelda owns a boat thanks to the repair repair services at the Oxfam Boat Rebuilding Centre in Talisay. Her nephew Robert uses the boat to catch the fish Imelda sells. She shares, “My heartfelt thanks to Oxfam. I am so glad we have received support. Thank you to the donors. Thank you, thank you, thank you.”

Typhoon Haiyan was one of the most powerful storms to ever make landfall. Four months after the storm hit the Philippines, life for villagers on Bantayan Island in Cebu province remains a struggle. Three-quarters of the island's population of about 136,000 depend on fishing as their main source...