When thinking ahead and working together means saving lives 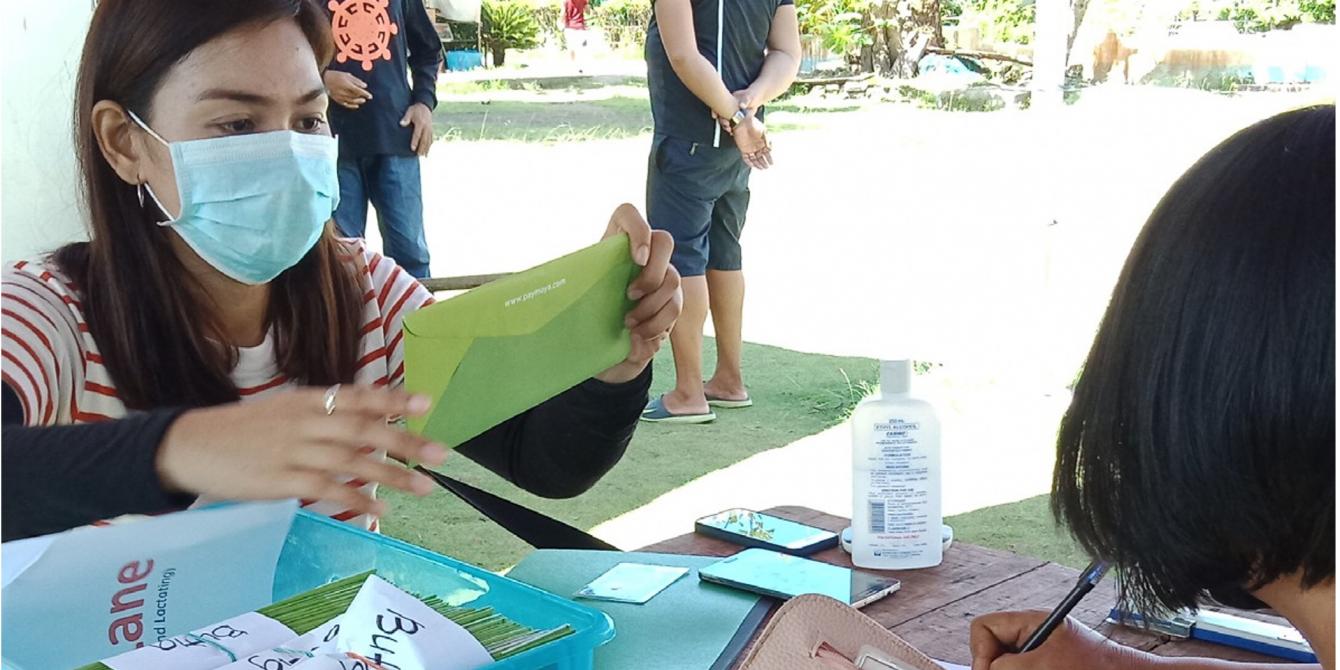 Distribution of iAFFORD Cards to project participants in Barangay Butig, one
of the priority areas of the B-READY Project. (Photo: PDRRN)

There are two things that PDRRN values in the B-READY Project – forward thinking and working together. For the network, anticipation and partnership are key to saving lives and building back better, faster.

PDRRN served as the implementing partner of the B-READY Project in its pilot run in the municipality ofSalcedo in Eastern Samar. Established in 1991, it has a wealth of experience in working for sustainabledevelopment among poor and high-risk communities primarily by engaging them in community-baseddisaster risk reduction (CBDRR) and working hand-in-hand with community-based disaster responseorganizations (CBDROs) and humanitarian response.

PDRRN has also been employing cash transfer programming in their humanitarian responses through cash disbursement and voucher systems. Since STY Haiyan left a trail of utter destruction in 2013, the organization has been involved, through its partners such as Oxfam, in the work of advancing a safer and more efficientway of providing cash transfers to disaster-affected communities using digital financial services.

“But what makes B-READY different is that it combines technological innovation through forecast-based financing and establishes a digital financial ecosystem in climate- vulnerable communities that allows for pre- emptive cash transfer. In this project, there is a lot of emphasis and effort on thinking ahead… on anticipation,” she adds.

Partnership is at the crux of the B-READY Project. This means making sure that the people of Salcedo, from itsleadership to its most vulnerable community members, are heard and visible in all areas of decision-making of the project.

As a preparatory activity, the consortium worked with the Barangay Disaster Risk Reduction Council (BDRRMC) to update their disaster contingency plans through the use of the participatory capacity andvulnerability assessment or the PCVA. The PCVA is a risk analysis process designed to engage withcommunities in contexts where disasters and climate change are significant drivers of poverty and suffering.

The PCVA approach highlights analysis of capacity as an important way of offsetting vulnerability by bringingto the surface hidden capacities — social networks, local knowledge, community resilience, among others —which are not easily revealed as well as the capacity of marginal groups — women, children, elderly, and other high-risk groups —who are often overlooked but have the potential to drive change.

Since the beginning of the B-READY Project, eight of the nine barangays covered by the project in Salcedo had their disaster preparedness plans updated. They have also integrated the resolution to adopt and approve the Tropical Cyclone (Typhoon) Forecasting Index for the B-READY Project.

During the implementation of the project, a recurring challenge was that some recipients did not have their own personal mobile phones and numbers and were relying on relatives to assist them in accessing the digitalplatform.

There were also instances when some recipients had non-functioning accounts because they had forgottentheir passwords or their assigned mobile phone numbers. Because of this situation, some community memberslost confidence during the initial stages of the B-READY process and found it difficult to avail of the digitalfinancial services.

“There were instances where communities had no reliable mobile signal and community members had to go to designated areas to be able to use their phones. Because some elderly recipients could not use their phones due to signal and access problems, their SIM cards expired,” Llanera laments.

To address the situation, the project initiated a Youth Financial Literacy workshop, enlisting young people, 18 to 30 years old, so that they, along with the Protection Monitor volunteers, would be able to assist theirrelatives and neighbors who needed support in solving account or technical problems. “This way, theiraccounts would not expire and they would be ready to receive cash assistance before a disaster strikes,” Llanera notes.

After enlisting with the project, representatives of B-READY recipients were invited to undergo several trainings where they would not only get to know about DRR, but also acquire new knowledge in using digital financial services — through users’ education training — and financial literacy through tips and ideas on how to budget and save money using their digital accounts and PayMaya iAFFORD cards. Some of the recipients of the project were also members of savings groups who were given the same training.

“During the users’ training, we taught them how to access PayMaya so that their accounts would always be updated. Aside from these, we also provided hotlines and gave them their record information, such as date of registration, so that they would not have a hard time in validating their accounts once technical problems occurred,” shares Llanera.

B-READY partner merchants or MIMO outlets in the barangays were one of the recipients’ lifelines in accessing the digital platform. MIMOs are micro/small merchants or agents in the village, most ofwhom are entrepreneurs who own sari-sari stores in the villages. These MIMOs help program participants whoare experiencing SIM card problems by reaching out to PayMaya’s hotline numbers. In Barangay Burao, one of the pilot areas, one MIMO was frequented by project participants who were experiencing problems.

Because of their role, MIMOs are also given training according to their roles and functions in the project.

Despite the many challenges, the B-READY Project’s cash disbursement has reached 95% of the projectparticipants or 1,852 individuals out of the total 1,959 project participants.

Impacts on the community

“Some people came to us and told us that without the B-READY Project, they would have zero knowledge about using digital financial services such as PayMaya and prepaid cards,” notes Llanera.

Such reaction was far from the recipients’ initial hesitancy during the initial phase of the project. Some were not interested because in their mind, using the platform for their daily transactions, and more so on savingcash, was difficult since they did not have the means nor did they have enough money to save.

Llanera points out that in the B-READY Project, families were given access to the digital platform and were nowusing it for personal transactions. She says some use it to send and receive money to and from relativesworking outside Salcedo, such as those who have family members in Manila. “We explained to them that they can save by leaving a portion of their money in the account and not withdrawing everything at once,” she adds.

“The most important thing that we teach them is that they should keep their accounts functioning because it is their lifetime account, and that they can use it anywhere they go,” says Llanera.

With the presence of MIMOs in the pilot barangays, project participants (particularly those who live in far-flung coastal areas and island communities) no longer need to spend so much time and effort to go to the townproper to access the platform. The presence of MIMOs has also reduced the risks associated with travelling tothe town center and back.

Many communities rely on unsafe habal-habal or motorcycle taxis to travel outside their barangay even if fare costs are high.

Llanera says the merchants play a big role in the B-READY Project; so the team also trained them about DRR and their roles and functions in it, as well as about financial literacy. She notes that the merchants realized theimportance of their service in times of disasters and that they appreciated the fact that they could help theirneighbors. “They are able to help and, at the same, jumpstart the economy by selling goods that are necessaryto prepare for a typhoon or even after it hits,” she adds.

In fact, Llanera says, some people from outside the nine pilot barangays have reached out to her to expresstheir interest and willingness to be trained as MIMOs/merchants. “More and more people want to be involved,”she points out.

The project has also benefited the municipal government of Salcedo by helping it advance its vision of modeling a safer, adaptive, and risk-resilient municipality. The partnership with the LGU has been veryeffective that Salcedo Mayor Melchor Mergal has become a staunch advocate of the B-READY Project and hasbeen encouraging other municipalities to adopt the project.

“Mayor Mergal has been hands-on in the implementation of the project. Recently, they have already taken itupon themselves to lead the activities such as the upcoming community drills,” Llanera notes.

Forecasting Index for the B-READY Project. The resolution will allow the release of pre-emptive cash transfer based on the guidelines or triggers in the EWS and see if these are within the forecast index that they haveidentified and approved themselves.

According to Llanera, what will make B-READY more effective will be the ability of the B-READY partners to work towards involving telecommunication service providers in order to provide wider mobile signal coverage or connectivity to geographically isolated and high-risk areas where the B-READY Project can be deployed in the future.

“It will be valuable for people to be able to receive warnings and notifications immediately without having toworry about going somewhere to get a mobile signal, so that they will know that there is some help on the wayand that they can prepare and have some peace of mind before a calamity strikes,” she stresses.