From stereotype to conventional: Shifting women’s role through the Women in Carpentry Project 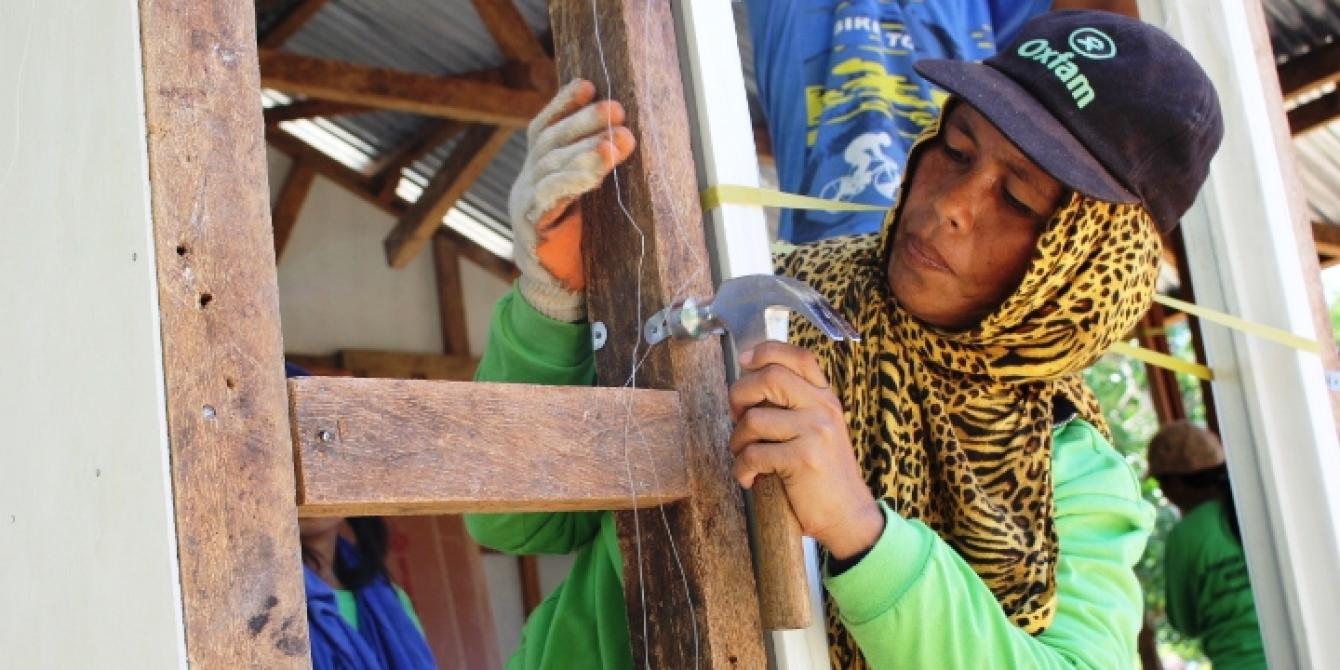 They were saying women can’t be carpenters. But we did not mind what they were saying because we know they are only amused to see us in this work. This is our chance to show our credibility and prove nothing is impossible for women.
Margie Vega, Leyte

“I learned that women are not just for the home. Before, women are just at home and do not know many things. You can put women anywhere. Women have the power, and they can do anything.” Elizabeth Tibay, 34

What happens when you give a woman shovel, hammer, and carpentry skills? Homes are restored, and the family life takes on a new future. This has been the case for Elizabeth. For the past 19 days, she has been attending the carpentry and masonry training held in her community. She immediately applied her new knowledge to her own home which suffered great destruction after Haiyan. After the training, she looks forward to receiving the carpentry tools, and hopefully land a job somewhere in the island where she can make use of her carpentry and masonry skills. Elizabeth shares this experience with over 119 other women, who have engaged in the Women in Carpentry (WIC) Project of Oxfam across Typhoon Haiyan-hit areas in the Visayas.

The idea was simple—mobilise women, the out-of- school youth and members of the LGBT community to engage in the rebuilding efforts of houses and infrastructures in their own community. While learning, they were given cash as allowance (cash-for- training scheme) equal to the daily wage of a skilled worker. As they learn, they immediately apply the skills in repairing their own homes. However, carpentry and masonry has always been viewed as a man’s domain, a field of strength where, women and others considered vulnerable cannot engage in.

After the typhoon, there seemed a scarcity of men available for carpentry, as most of them were caught in between repairing houses and looking for means of livelihood and source of food. Men prioritized these over repairing their torn homes. Although there were some carpenters willing to work for salary, families cannot afford due to high cost of labour.

Women in Carpentry (WIC) is a project of Oxfam piloted in some communities in Leyte and Tacloban, as well as in Northern Cebu. In Leyte, this was done in partnership with GREEN Mindanao, while in Northern Cebu it was made possible through Gawad Kalinga and the help of the Local Government Units of Bantayan Island.

The project is initiated under Oxfam’s Shelter and Livelihood teams as part of transitional shelter support project to fast track the repair of houses of the survivors from Typhoon Yolanda.

Piloting women in carpentry in Leyte

In the province of Eastern Leyte, the project was implemented in three highly devastated coastal Barangays of the Municipality of Tanauan namely San Roque, Bislig and Santo Niño. The three Barangays recorded a total of 2,912 households, with houses badly devastated by the storm surge of Typhoon Yolanda. The devastation left the people in more vulnerable and deprived condition as most houses were washed out because they were situated near the Bay. Along with their houses, they have also lost their livelihoods which highly depend on fishing, livestock-raising and production of fishing equipment.

The project started when Oxfam, along with local partner GREEN Mindanao (a local NGO) conducted a discussion with the community to identify the possibility of providing skills for carpentry. After community consultations, the team learned that men were not available to do the work because they were occupied with more immediate needs such as finding food and restoring their lost livelihood. This limitation led to initiate discussion if women were willing to be groomed as carpenters. A huge interest rose among women, and also realized that they can involve other groups such as the lesbians, gays and the out-of- school youth in the community.

Upon identification of the beneficiaries, a total of 100 participants were mobilised of which, 62 or more than half were women, 26 were men, eight were youth, and four from the LGBT community. They were divided into nine groups, with 11 to 12 members each. Master carpenters were also hired to help organize the work and schedule of each group, as well as provide technical coaching and mentoring in the process. At first, the community found this project rather amusing, as one of the women carpenters shared:

“People from our community reacted upon seeing women doing carpentry work because it is considered as male domain only. At first they were surprised, so they started teasing and making fun of us. They were saying women can’t do carpentry work because it requires climbing on top to make a shed. But we did not mind what they were saying because we know they are only amused to see women in this work. This is our chance to show our credibility and prove nothing is impossible for women.” (Margie Vega, Leyte)

The participants were asked to bring their own available carpentry tools. Construction materials in the form of nails, nipa for roofing and amakan (woven bamboo slates) for walling were provided to the identified beneficiaries. All household beneficiaries were also provided with gasoline to be used for the chainsaws provided by GREEN Mindanao to produce required lumber. Each household was free to design their own house repair using the materials provided.

All in all, the whole group was able to construct 40 houses. Total working days to finish assigned number of houses for repair by each group were 12 days. It can be noted that five groups finished repairing four houses, while four groups finished repairing five houses each in a 12-day period. All groups had 11 members except for one group in Barangay Bislig that had 12.

Per beneficiary received 260 PHP (5.80 USD) per day. All in all, a total budget of 347,600 PHP (7745 USD) was disbursed for the project. Wages of the master carpenters were taken from another fund source and were not of the cost of this specific project. However, the project with funding from Oxfam physically repaired only 40 houses. The project was an experiment and any lessons learned after careful evaluation would become basis of further actions using similar strategy.

The project was implemented in Bantayan and Madridejos through the partnership of Gawad Kalinga (GK)—a local non-government organization, in which the main goal was to build permanent shelters for Haiyan survivors. GK provided for the materials and location of work, while Oxfam’s counterpart was to provide labour. The training lasted for 25 days, and each day, the workers earn 282 PHP (6.28 USD) as cash-for-training.

On the other hand, the project was implemented in Santa Fe through the help of the municipal government. The LGU provided the materials and the location of work as well as the technical mentors coming from the Technical Education and Skills Development Authority (Philippines) or TESDA. The work lasted for a total of 25 days. After the training, each participant receives a TESDA accreditation with National Certificate 2 (license), a proof that they are official skilled workers. Upon completion, they also receive a set of carpentry tools which includehammer, hack saw, chisel, label, shovel, pick-mattock, crowbar and palette among others.

To help the participants find a job, Oxfam sent the profile of the skilled workers to other INGOs. The local government unit of Santa Fe is also exploring the possibility of making these skilled workers a priority when they hire people for construction in the municipality. To date, four units of the model houses were constructed in the nursery (practice area) has and are ready for occupancy. Beneficiaries for these constructed houses will be determined by the LGU of Santa Fe.

Aside from the workers, trainees were also given other tasks such as Venus Cabrera. Venus serves as the training monitor and takes note of the trainees’ attendance and concerns. She notes that the training has been very beneficial to her: 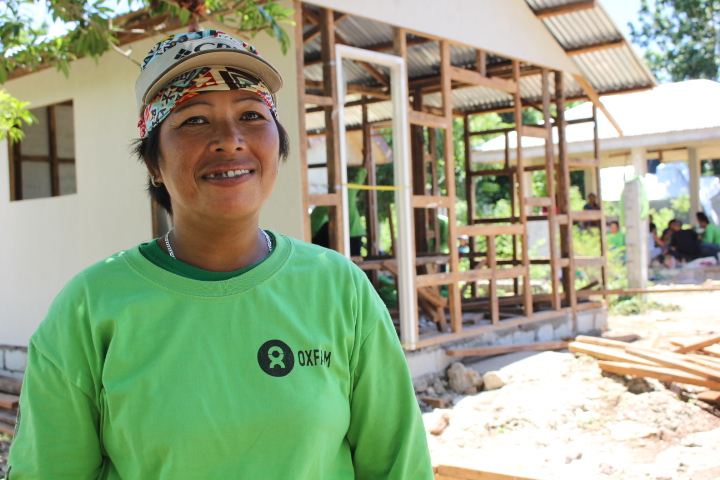 “Because of this, we did not need to hire someone to do masonry and, on my own, I can repair our home. I am also thinking of applying. When my husband learned about it, he was laughing at me. He was doubtful if I can handle it. I said ‘That is the reason why we have the training. Do you think there are things men can do that women can’t? Women can do it’. The men who also train here laughed at us. I would tell them that women can also work like they do especially during these times. The work is not too hard, as long as we are helping each other. This is a big help to us. I use the money that I earn here to buy food for my children and daily supplies for ourhouse. ” (Venus Cabrera, woman carpenter,Bantayan Cebu)

Transforming dominant culture: It is a transformation in households, as well as in the community level, where the dominant culture perceives women in a care giving role within the family sphere only. This initiative is a good start in reshaping people’s mindset that women can perform and contribute to any work in a given enabling environment. 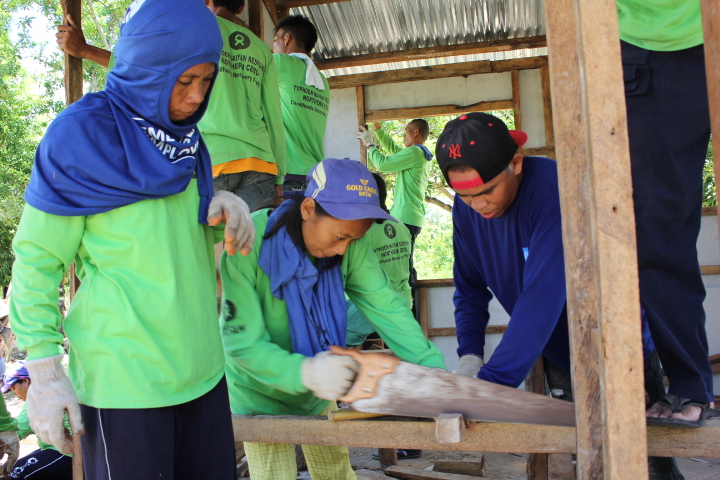 Gaining respect and confidence among women: One woman shared that, after the typhoon, she thought it was the end of the world. She has lost everything, even her husband. But after joining this work, she felt empowered and realized that she didn’t need to depend on anyone any more. Now she knows what to do if she will face another disaster in the future. Women received honour and respect from other family members for their carpentry role.