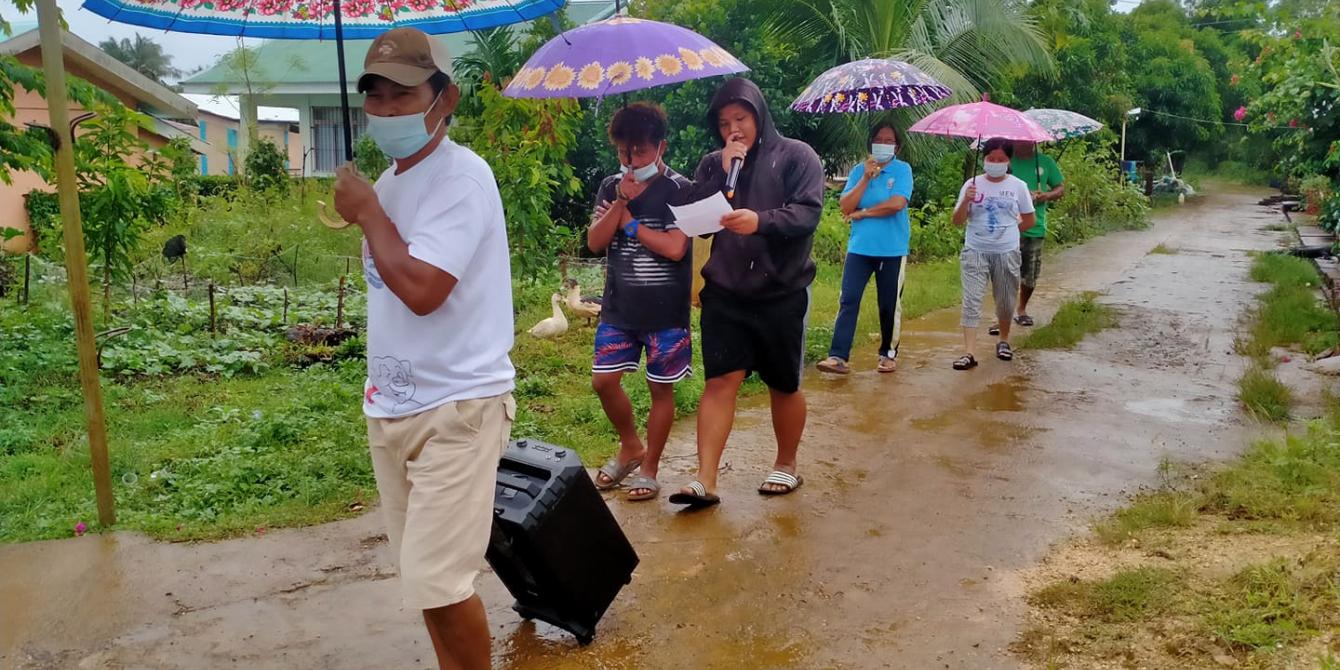 DRR response and intervention, as I have learned from experience and through evidence, should be providedbefore impact, so, at least, people will have the time to prepare. This will greatly reduce people’s anxieties. They will have more peace of mind
Mayor Melchor Mergal
Municipality of Salcedo, Eastern Samar

With its vision of modeling a safer, adaptive, anddisaster risk-resilient municipality, the municipality of Salcedo in Eastern Samar province was chosen as the pilot implementation area for the B-READY Project. Home toalmost 23,000 individuals that make up around 5,000households, the fifth-class municipality has learned alot of lessons from past calamities, inspiring it to be aleader when it comes to putting good governance atthe heart of transformative DRR.

When Mayor Melchor Mergal, or Mayor Mel to his friends and constituents, learned about the B-READY Project, he was convinced that it was a strategic pathway to a more resilient Salcedo and would lead to a more effective DRR governance, of which he is a staunch advocate.

“The idea was presented to me and I began to appreciate it because it offered a more practical approach toaddressing our current realities and gaps in disaster response. It would also complement the existing policies that we already have on DRR,” he says.

Before, Mergal recalls, the municipality thought it could activate and use its DRR Fund ‘only upon impact’ or‘upon landfall’ of the typhoon or any calamity. But B-READY shifts that perspective.

“DRR response and intervention, as I have learned from experience and through evidence, should be providedbefore impact, so, at least, people will have the time to prepare. This will greatly reduce people’s anxieties. They will have more peace of mind,” he notes.

When Mayor Mergal took office in 2013, his leadership was immediately put to the test when STY Haiyan ravaged Eastern Samar, The Barangay Council during a Community Drill on the use of the Parametric Model session in Salcedo (Photo: PDRRN) devastating Salcedo. Many lost their lives and many more were injured as massive loss of livelihoods andassets ensued. The aftermath of the typhoon challenged not only the town’s resilience, but also itsgovernment and its existing policies on disaster preparedness and response.

“[When I began in office] I had zero knowledge when it came to DRR. I had a limited plan to guide me and there was neither a Municipal DRR Management Office nor a functional Municipal DRR Management Council (MDRRMC). Practically, we had nothing. So, I took to heart that I will prioritize DRR governance because I do notwant history to repeat itself. With the help of the government, civil society organizations (CSOs), non-government organizations (NGOs), and the Department of the Interior and Local Government (DILG), I can saythat we now have a strong DRR governance in Salcedo,” Mergal claims.

The B-READY Project aims to better protect vulnerable households from natural disasters through a pre-disaster cash transfer program using two innovations: first, the use of digital weather forecasting and risk modeling technologies as part of the local communities’ EWS and triggermechanisms for early response; and second, the use of financial services provision technologies and a local financial ecosystem that would allow for safe and secure pre-disaster cash transfer programming.

Weather parametric forecasting uses an innovative technology that predicts weather patterns based oncombinations of easily measurable environmental indicators such as wind speed, ocean surfacetemperature, and humidity. When the indicators signal the likelihood of a typhoon, an electronic cashtransfer is automatically done through the

PayMaya digital financial services platform and Smart Padala cash remittance service, and the community members will be able to receive cash via their prepaid cards.

Apart from integrating these innovations and related processes, the project also aims to enhance localdisaster preparedness plans and systems by updating communities’ risk maps and strengthening existingsafeguarding mechanisms and capacities around women’s and children’s rights.

The main local government partner for the pilot project is the municipality of Salcedo, particularly theMunicipal Disaster Risk Reduction and Management Office (DRRMO) and its counterparts in the nineprioritized barangays, including their respective Barangay Council on Women and Children Protection.

“From my own experiences and seeing the evidence, I know that B-READY was practical and beneficial for themunicipality. Although we still operate within the existing policies and guidelines set by the National Government, we needed something that would complement them and also address our most current needsand experiences,” Mergal says.

At the initial stage of the project, Mergal had to coordinate with different members of the LGU and the MDRRMC, for them to know more and be able to prepare policies compliant with existing guidelines. The support of the Sangguniang Bayan (Municipal Council) played a big part in the implementation of the B-READYProject.

“We wanted to influence the community and ultimately, when the pilot project has been successful, to beable to influence other LGUs to adopt this system,” he adds.

According to Mayor Mergal, one of the things that the LGU leadership struggled with at the beginning of the project’s implementation was the fact that some of the elements of B-READY were too technical and new, thus needing careful attention.

To address this challenge, the LGU conducted several learning sessions and drills that helped communitymembers understand the project.

Face-to-face orientations and workshops proved to be effective ways to catalyze community learning. Simple and easy-to- remember terms were used to explain technical jargon used in the project’s design. Household members and project participants were also invited to join training sessions on how to registerand use prepaid cards and how to claim their cash aid from accredited shops and payment centers.

“In B-READY, it was also necessary that we communicated with the members of the LGU, COA, and the DILG because the National Government’s existing guidelines were different. B-READY focuses on preparation,while the existing guidelines emphasize the aftermath or the response. The challenge for us was how to go about this shift in perspective and our new waysof working,” Mergal shares.

The approach of B-READY had a marked difference from the existing DRR policies and guidelines, which was crucial to address, as it could be in conflict with the Government’s existing guidelines.

Gains and impact of the B-READY Project

For Mayor Mergal, the B-READY has shown various gains for the municipality and its impact is reflected in their new ways of working in Salcedo.

He says B-READY is more than a DRR project, but rather a whole approach — from capacity building to the institutionalization and functionality of the MDRRMC and the Barangay DRRMC.

The Salcedo LGU’s contingency plan was updated because of the B-READY Project, which was integrated with the EWS and their COVID-19 response. Mayor Mergal also observed significant improvements in theperformance of the MDRRMC resulting from the capacity training.

The B-READY Project also contributed to the municipality’s economic sector. To set up a financial ecosystemthat would allow for pre- emptive cash transfers, the LGU accredited micro/small entrepreneurs like “sari-sari” or small retail stores and payment centers as ”money in, money out” (MIMO) agents. Through these MIMOoutlets, cash aid was transferred to project participants.

After receiving aid, the project participants were free to decide on how to use the cash according to theirneed. They also gained new knowledge about financial management. Another advantage was that they did not have to go to the town center since MIMOs could be found in their barangays, addressing the difficulty of transporting and acquiring goods. The uptake in MIMOs in the nine B-READY pilot barangays generated a surge in Salcedo’s economic activities.

The people of Salcedo have suffered the harsh impacts of calamities. In the aftermath of typhoons,transportation was almost always made difficult due to roads strewn with uprooted trees and debris, which disrupted the municipality’s access to market suppliers and other lifelines.

Because of the low market supply, there is a higher tendency to compete for existing resources as people begin to secure their household needs such as food, medicine, shelter, and other immediateassistance.

Having pre-disaster cash can be used to prepare for the typhoon and will help reduce the amount of physicalinjury and casualties that families may experience in the aftermath of a disaster.

Mayor Mergal believes that B-READY will be part of Salcedo’s reality from now and into the foreseeable future.According to him, Salcedo is moving in the direction of digital cash transfers and the LGU has already laid down the foundations to support the innovative system.

In September 2020, the Sangguniang Bayan of the Municipality of Salcedo enacted Municipal Resolution 2020-37, titled ”A Resolution

to Adopt and Approve the Tropical Cyclone (Typhoon) Forecasting Index for the B-READY Project in Salcedo, Eastern Samar.”

“We are very positive that the B-READY scheme will continue because the system is already in place and cashtransfer has been included in the contingency plan and it is already working. The pilot barangays have also promised to adopt the barangay guidance for the pre- emptive cash transfer and the ordinance.

We already have policy support for B-READY,” Mergal shares. He also hopes that the legal issues preventing LGUs from providing pre-emptive cash assistance willsomeday be lifted through the adoption of pre-emptive disaster response policies by the national government specially since the country is often stricken by various disasters.

“My hope is that this will be adopted by other LGUs and that this will influence the national government to adopt the project model and create policies to support the vision of the B-READY Project,” he concludes.