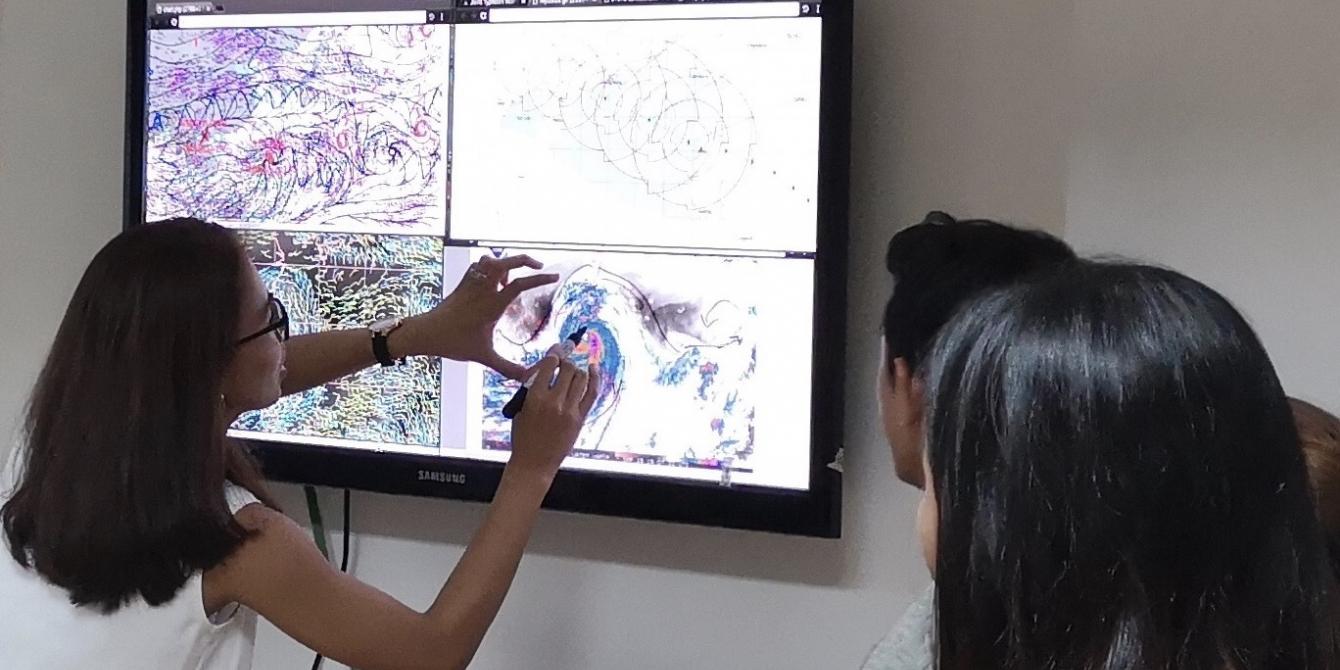 Deadlier heatwaves, more devastating droughts, more intense typhoons and massive flooding. Those are just some of the expected impacts of a warming world.

With the effects of climate change already being experienced by climate-vulnerable countries like the Philippines, there is an increasing need to improve early warning systems, said Manila Observatory executive director and former Ateneo de Manila University president Father Jett Villarin.

"In a warmer world, we are poised to face a lot of uncertainty, including more extreme events,” Villarin said.

“We’ve had a preview already,” he added, mentioning the increase in incidence of category 5 storms, such as Super Typhoon Rai (Odette) last December, making landfall.

Because of warmer sea surface temperatures caused by climate change, there is a larger possibility of tropical storms intensifying and causing destruction once they reach land.

According to Manila Observatory, 96-core computers are “the building block of the HPC5 supercomputer, which is currently the 9th most powerful system in the world.” The said computer is owned by a company in Italy called Eni that processes geophysical and seismic data to map the crust of the region they are studying.

As for Manila Observatory, they plan to use the 96-core computer to run an ensemble of weather prediction models. These models will then be analyzed by their researchers and shared with the public via the website panahon.observatory.ph/ecw. The website not only shows the current weather forecast but also potential solar and wind power production.

The machine will also be used to run climate models to come up with much-needed climate forecast maps. These will help people identify areas that are most at risk due to the changing climate. Because the computer has many cores or “brains,” it can run multiple computations and processes at the same time.

Villarin said he is thankful for Oxfam Pilipinas’ support, which will help increase the capacity of local scientists to narrow the uncertainties accompanying climate change.

“This is just the beginning of this partnership,” Villarin said of the unexpected donation.

Oxfam Pilipinas Country Director Lot Felizco said the humanitarian and development organization was eager to help Manila Observatory since it sees climate change as one of the biggest multipliers of poverty around the world.

Besides providing much-needed supplies to survivors during emergencies, Oxfam has also been involved in anticipatory action (RELATED: https://opinion.inquirer.net/145253/paradigm-shift-in-disaster-response-...), which prioritizes support for the community even before a disaster strikes.

Its pilot projects in Eastern Samar and Mindanao have shown that cash transfer assistance and training of village officials and residents can definitely save lives and livelihoods. The project involves the use of a forecasting model that determines if cash would be released to residents who can then use it to buy food, medicine and other supplies in anticipation of a typhoon or flooding.

Villarin said he is excited by the prospect of Manila Observatory working with Oxfam on such projects.

He said it is really important and urgent to have science as a good foundation for development work.

“It’s very fulfilling to know that something in the lab is translating to lives saved out there,” he said.

Villarin said they will be using the machine to explore changes and uncertainties in the seasons, inter-annual weather patterns, and long-term decadal climate in this century.

“You’d like to know all this for agriculture and fisheries, for example. How will changes in habagat, amihan, La Niña or El Niño adversely affect us on the ground?” he explained.

Villarin said the plan is not to compete with the state weather bureau, the Philippine Atmospheric, Geophysical and Astronomical Services Administration (PAGASA) but to work alongside them.

“Theirs is the official voice. Ours is another set of eyes looking at the same thing. For example, if you have a typhoon coming, there are already many pictures coming from PAGASA, Japan, US, and Europe, etc.” he said.

Most of the time, the forecasts converge but “there are instances when these forecasts diverge and there will be other points of view.”

“We can provide another point of view based on our calculations and ground-based stations,” Villarin said.

Asked what the future holds for the Philippines, Villarin said that while being surrounded by the ocean might serve as a buffer for heat effects that are more significantly experienced over continental and polar areas, in this part of the world, we will have to deal with warming waters and rising sea levels.

"This machine will help us see the future,” he said. 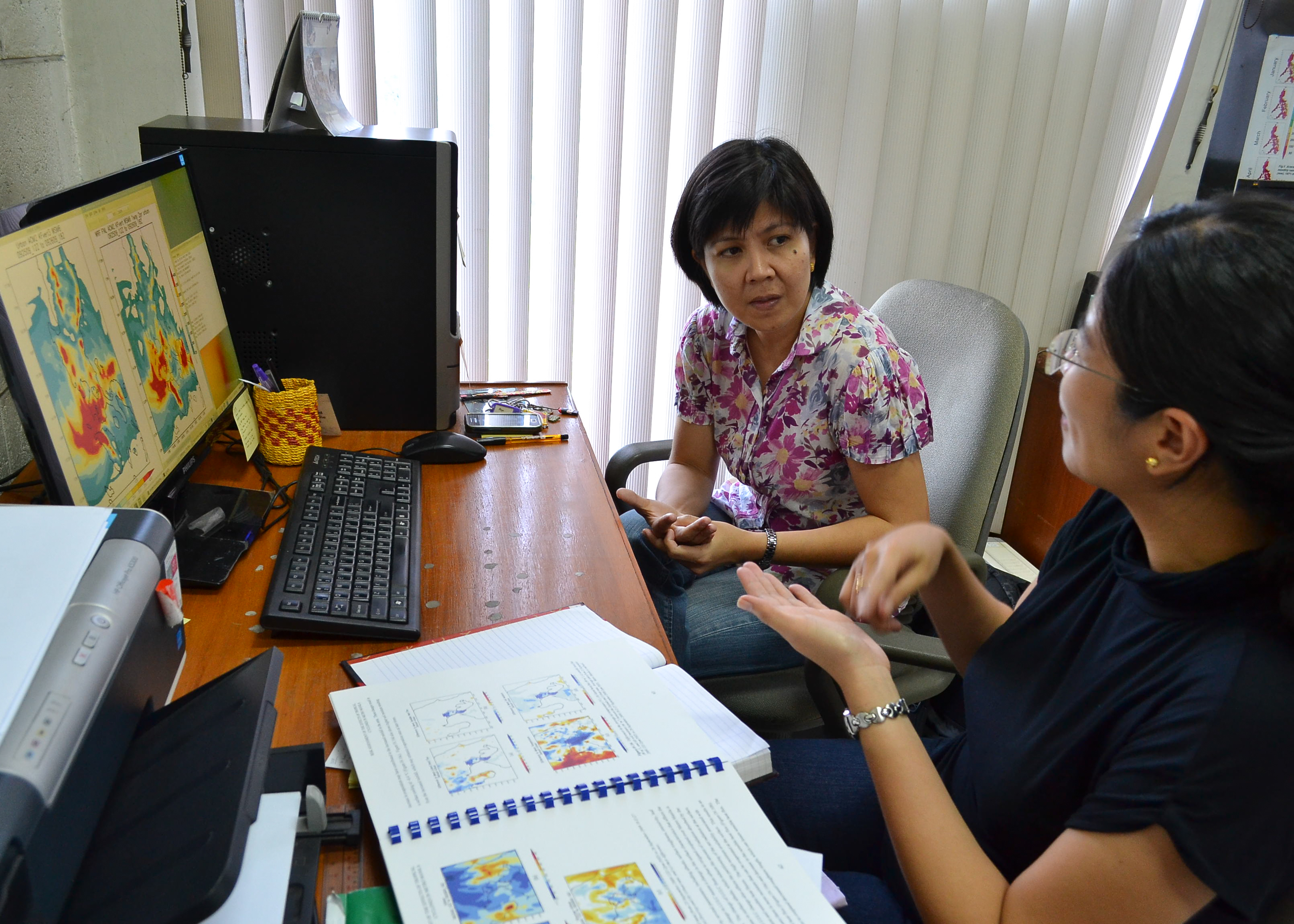 Villarin said some people would argue that the future scientists dread of is still decades away.

However, he said, “That kind of future depends on what we do now.” Among the many things that we need to prepare for are changes in the water cycle, in particular, the possibility of severe stresses on our water supply.

For now, Manila Observatory is working on acquiring more machines to strengthen their climate computing facility.

Villarin said he hopes to have more multidisciplinary partnerships since science alone will not solve the climate emergency.

“We need to strengthen or increase the resilience of people and communities. That means governance, communication, markets, institutions, and not just technology. As an observatory, we hope to be a small catalyst whose presence helps make things happen in the community, the nation, and even beyond our borders,” he said.

Villarin, who is also a physicist, said while there are reasons to be scared about climate change, “There’s hope.”

“As Filipinos, we can tap into our indigenous ways, our culture of social connectedness and endurance. There’s something hopeful there,” he said, mentioning Batanes as an example of a community that has learned to adapt in a wind- and storm-lashed landscape.

“Their houses are strong. Built not just by individuals but by a community,” he said.

“This issue (of climate change) will force us to draw from our vast and deep cultural reserves. Papa-igibin tayo sa ating kalinangan (It will make us draw from our culture), and we will find there certain strengths that will help us withstand (the changing climate),” he added.

Villarin said “we cannot afford to mope and be depressed about this” and he would rather place his faith in Filipinos who “have what it takes to survive” adversities in life, climate change included.