No one left behind 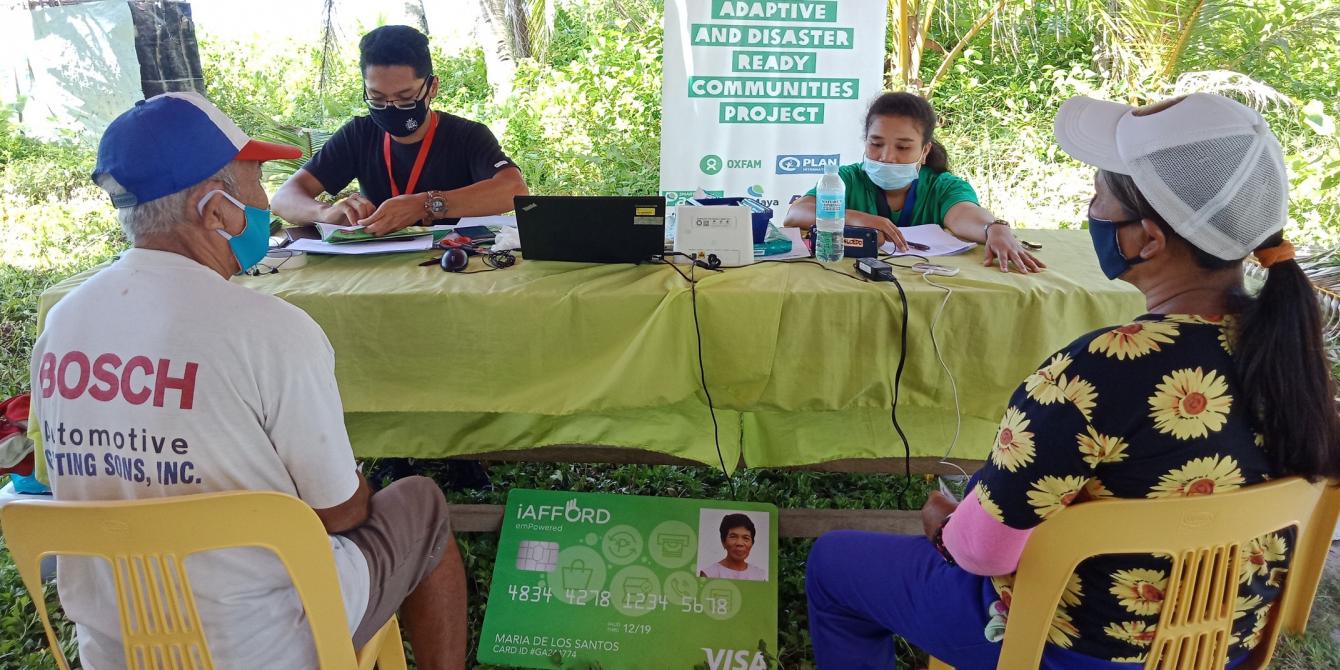 Distribution of iAFFORD Cards to project participants in Barangay Burak, one of the priority areas of the B-READY Project. (Photo: PDRRN)

There was an understanding of roles between men and women, and not the traditional roles where men make the key family decisions. Now they are sharing responsibilities; women also play a role in small businesses here...
Aida Loyola, Provincial Supervisor for Eastern Samar and Lead for Gender and Protection
Plan International

It has been acknowledged that women and men experience disasters differently. Gender and otherintersecting factors such as socio- economic conditions, cultural beliefs, and traditional practices shapethe disaster experience of individuals, as well as their ability to recover.

Experience has led to a valuable lesson that understanding different gender roles, responsibilities, needs and capacities to identify, reduce, prepare, and respond to disasters are critical to effective disaster risk management (DRM).

In the municipality of Salcedo where the B-READY Project was piloted, a gender assessment study conducted by the project team in 2020 saw that gender relations can become worse in times of disaster. It also found out that by reducing the need to turn to loans to have food during typhoon preparations, cash transfers can reduce conflicts within the household.

As one mother from Salcedo narrated during the interviews, “When a typhoon is coming, I need to borrowmoney to buy food from the sari-sari store… it annoys me when my husband does not have cash… this annoys him, too, and so we begin to quarrel.”

Aside from such findings, the study also saw that in the communities, it was a norm to see women do “inside work” while men do “outside work.” Women mainly perform household chores and care work, while men go outto sea to fish.

Protection Monitors on the front lines

To tackle these issues, the project team together with the Barangay Council, identified Protection Monitorsfrom each of the B-READY covered barangays. Protection Monitors have an important role in the overallimplementation of the project, where they serve as teachers and facilitators during training, assist incommunity evacuation drills, mobilize people when there are community meetings, and help in processing cash disbursements.

Protection monitors also monitor GBV-related cases in the barangay and make sure that these are reported tothe referral pathways that have already been installed in the pilot barangays in Salcedo.

To equip them for this task, the protection monitors were trained on gender awareness and sensitization andprovided them with mobile phone units that had hotline numbers where they could report abuses.

The project also initiated some activities to spread gender messages and promote community engagement. Such activities included public service announcements (PSAs) on GBV, which were broadcasted over community radio and through the bandilyo system, a traditional way of public mobile announcement using a trompa (speaker connected to a public address system) ormegaphones.

Over the years, through the efforts of the local government, women’s groups and NGOs working in Salcedo, Loyola saw many changes in the roles of women and men in the barangays.

“You won’t see women simply staying at home and bound to house chores. Now women participate in the activities along with their husbands. There was an understanding of roles between men and women, and not the traditional roles where men make the key family decisions. Now they are sharing responsibilities; women also play a role in small businesses here, such as selling fish and opening a sari- sari store,” Loyola notes.

She also reflects on how the training and community campaigns on DRR and GBV have helped people to beconstantly reminded about disaster readiness. “If there are calamities, people already know what to do evenbefore the landfall — unlike before when they would wait for an advisory before they moved, prepared, orevacuated,” she notes.

Loyola recalls the biggest challenges that they faced in the implementation of the B-READY Project. At theinitial stages of rollout, the staff, along with the community leaders and members, needed to adjust to the new strategy and the paradigm shift that the project offered, as well as understand the technical terms.

“I appreciate it because it is a new technology. Although it took some time for barangays to navigate this innovation, it was the LGU that campaigned to get the people’s support.

The Mayor of Salcedo kept on sharing his experiences everywhere he went and encouraged other LGUs to use it,too. Our knowledge increased through the capacity training and drills,” she shares.

The implementation period coincided with the emergence of the COVID-19 pandemic and the subsequent quarantine and lockdowns, which delayed the rollout of some of the project’s activities and barred face-to-face interactions. These limitations called for a change in the team’s strategy, specifically by pushing them toconduct their training and meetings online.

The protection monitors also stepped in, performing tasks such as monitoring, reporting and disseminating information in the community about COVID-19 and volunteered their services even without an honorarium.

Loyola hopes that B-READY will be adopted by other local governments and the whole province. “Althoughthe local government has already adopted a resolution on Typhoon Forecast Index for the B-READY Project,it will mean a lot if this will be supported policy-wise at the provincial and national government levels, so it will notlead to any possible violations of existing government measures on cash disbursements during emergencies,” she says.