It takes a village to shift social norms 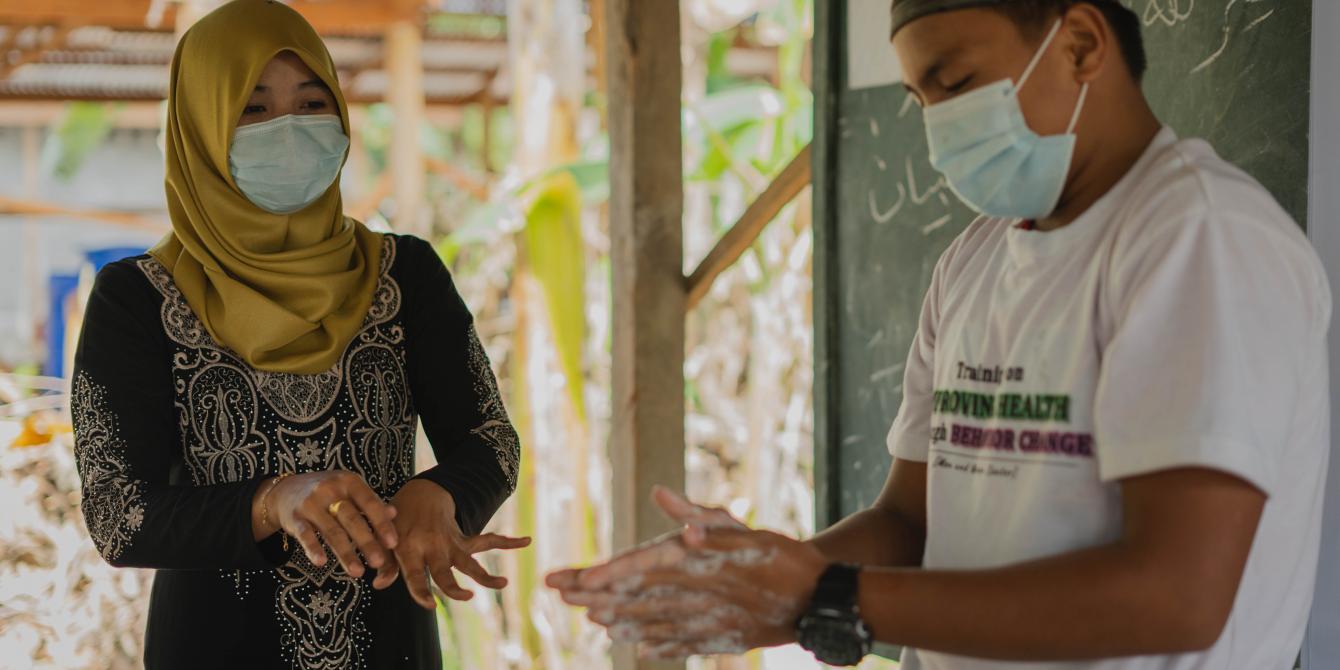 Norhaimin Omar, 26, is an elected youth council leader and health promotion champion keeping her community safe from Covid-19 and other infectious disease outbreaks by teaching young people the importance of proper handwashing and hygiene. Her village in Shariff Saydona Mustapha, Maguindanao is a designated evacuation area that hosts hundreds of families forced to flee their homes because of armed conflict, even during Covid-19 lockdowns. “My dream is for my community to be safe from violence and the coronavirus,” said Norhaimin. (Photo: Princess Taroza/Oxfam)

At 9AM in Barangay Tukanakuden in Sultan sa Barongis, Maguindanao province, health champions would start flocking in the barangay hall. The champions refer to these training sessions as “classes”. The roster of champions is diverse – most of them are mothers, as they are the project's primary participants. However, a handful of them are fathers, as well as young adults who are still in school.

Majority of the adults have little formal education, so they take pride in going to these classes, an experience that their scant educational background had deprived them. At that time, students across the province have been confined in their homes for eight months, limited by modular learning and unable to interact in social spaces. For these students, the sessions were a reintroduction of face-to-face classes that they welcomed; but even more significantly, an avenue to learning things not ordinarily included in school curricula.

The hygiene and sanitation promotion sessions are part of a larger effort of the Hygiene Behavior Change Coalition (HBCC) Project implemented by Oxfam together with its local partners, with the support from Unilever and UK DFID. The project promotes proper hygiene and sanitation practices to combat the COVID-19 pandemic. The project design has a simple proposition. WASH (water, sanitation, and hygiene) Officers trained community members, women, men, and young adults on hygiene promotion to teach other advocates in their own communities, where community reception promised sustained impacts.

Amplified voices of the community members

Perhaps one of the strategies that ensured the project's sustainability even after its implementation was the community consultations conducted prior to the training sessions. A Training Needs Assessment was administered to assess the level of knowledge of the champions about hygiene and sanitation. Community meetings were facilitated to design the handwashing facilities and decide on the appropriate locations where these facilities will be built. The visual aids that were used during the training were also developed with the community. In all of these activities, community members led the conversations. This ensured that the training design and the infrastructure are tailored to the needs of the communities.

Leaders for sanitation and hygiene

Community leaders are active participants in the program. In response to the community consultations, the Sangguniang Bayan (Municipal Council) of Sultan sa Barongis passed an Executive Order to create a Municipal WASH Task Force. The task force was formed out of the community's identified needs on safe and potable water sources across villages in Sultan sa Barongis.

The Municipal Local Government Unit (MLGU) also initiated a meeting to identify potable and non-potable water pumps in areas in the villages of Barurao, Masulot, Tugal, and Tukanakuden. Barangay Tukanakuden residents expressed concerns over the dilapidated latrines and the lack of enough toilets in the community. The Sangguniang Bayan addressed their concerns immediately by passing an ordinance to create latrines in every area. As of May 7, one area had already finished the construction of its latrine. Another sitio is in the process of construction of a latrine.

Barangay Masulot resident Haris Pagabangan shared that since his wife left to work abroad, the responsibility of taking care of his child was passed on to his mother. “I thought it was fine until I learned about my obligation and role to my child – that I should be taking care of her and that there is nothing wrong with that even though, and especially because, I am a man. Now I nurse my child, feed her, and do the things I should have been doing as a responsible father", he shared.

In Barangay Tukanakuden, a resident and mother, Shaima Manandili beams with pride as she talks about her husband. "He always helps me with the household work now. When he sees that I am resting and our youngest child needs to be fed, he takes care of him. It feels nice to have a husband who shares the brunt of work with me”, she said.

Four months after the project had concluded, some of the participants to the hygiene and sanitation promotion trainings have vowed to continue their efforts in passing on their knowledge on hygiene and sanitation to other community members. Impactful programs usually take more than 11 months to create but HBCC has created meaningful infrastructural, legislative, and cultural changes in the target barangays in the municipality.