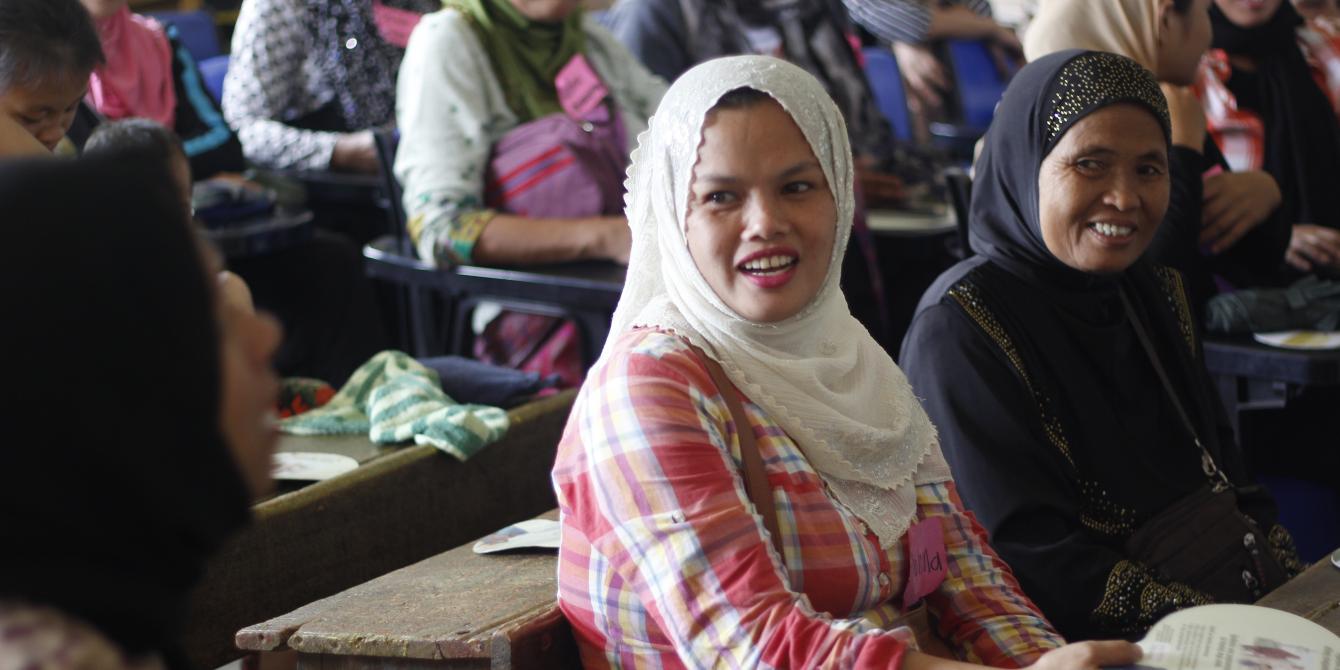 During a Family Conversation session with Al-Mujadilah Development Foundation (AMDF) at Saguiaran, Lanao del Sur. Women were given a moment to 'breathe' by sharing their stories and reflecting on life inside the evacuation center and community-based shelters. (Photo: Genevive Estacaan/Oxfam)

Eight months after the conflict erupted in Marawi, the pursuit of recovery remains a long-term endeavor.  While needs of displaced families are continually being addressed by government and humanitarian actors, a big number of the displaced population continue to face difficult conditions. One of the key issues identified as needing urgent attention is how interventions made by the government and non-government humanitarian organizations addressed the differentiated needs, both at the immediate and strategic levels, of women, men, girls, and boys, specifically those staying in evacuation centers and community-based shelters.

As the response transitions from emergency to early recovery, a comprehensive analysis of the gender context is crucial to better map, identify and understand the risks and vulnerabilities, differential impacts, immediate and long-term needs of women, men, girls and boys so that government and humanitarian actors could design and carry-out effective interventions required by those in need.

Oxfam, together with our partners, the Almujadilah Foundation (AMDF) and United Youth of the Philippines – Women (UnYPhil-Women) jointly produced the ‘Gender Snapshot of Marawi Conflict’ which aimed to provide a gender analysis of the situation of internally displaced individuals affected by the conflict. It seeks to inform efforts on early recovery, ensuring gender responsiveness as a way to promote the use of gender approaches in a conflict setting.

On 23 October, the government declared the termination of military operations in Marawi City exactly five months after hundreds of Islamist insurgents occupied the city and held on to parts of it in what has become the Philippines' biggest security crisis in years. While fighting has stopped in Marawi, Congress approved the extension of Martial Law for another year in Mindanao citing the lingering terror threat as well as the armed insurgency of the communist New People’s Army (NPA) as reasons for seeking the extension until December 31, 2018.

While martial law remains in place across Mindanao, local authorities and regional government agencies under the   Task Force Bangon Marawi, have focused their attention on the organized return of the displaced population to their places of origin.

As of 17 January 2018, the Department of Social Welfare and Development (DSWD) reported a total of 3,532 families or 17,434 individuals are still staying inside evacuation centers who need continued humanitarian assistance, while a total of 72,752 families or 332,445 individuals are residing with host communities who are yet to return. The government has conducted post-conflict needs assessments of approximately half of Marawi City’s barangays, and military operations continue to clear areas of explosive remnants of war and maintain security.

The government has started the phased return of Marawi City residents whose homes are located in barangays that had a minimum to medium damage. About 18,000 families have returned to 27 barangays in Marawi city and additional families from the six barangays this January 2018. The return process is slow due to security risks, preparation of return barangays and the slow implementation of the transitional site in Sagonsungan.