May polls crucial for urgent shift to clean, cheap renewables

MANILA, Philippines — Purok Ilaya, a small farming community in Bacolod City in Negros Occidental, has not been reached by power lines even though it is located in one of Western Visayas’ highly urbanized cities.

To light up their homes, some members of the urban poor community paid higher rates for power tapped from nearby electrified areas. It was only in February that a 1.6-kilowatt solar photovoltaic system — a small-scale renewable energy donation by a non-profit — gave them access to their own source of electricity.

For Ludy Rivera, the solar-powered system brought benefits to around 60 households by serving as a communal charging station for communication and lighting devices. It also powers the community’s hydroponics greenhouse, where members grow vegetables.

"Harnessing solar energy is good for the community because we no longer worry about electricity costs and it’s clean unlike other energy sources that endanger people’s health," the chairperson of the Association of Small Farmers of Purok Ilaya said in Filipino, adding members only pay P10 to P20 for the maintenance of the system.

The community-owned project shows the effort to democratize the management of energy resources. It is also a testament that getting clean and affordable renewable energy can be undertaken by ordinary Filipinos as long as they are supported, said the Center for Energy, Ecology and Development (CEED).

"It’s a microcosm of what the Philippines can be if we only pursue and embrace what renewable energy can usher to us," CEED executive director Gerry Arances told Philstar.com.

Power 4 People Coalition — made up of environment and people’s organizations, Catholic dioceses, and youth groups — is calling on candidates for national positions to end the country’s dependence on coal, gas and oil, and to harness the full potential of renewable energy if they win in the May elections.

"Filipinos are more than ready to leave dirty, deadly, and costly fossil fuels in the past. We are ready for a future where energy is affordable, reliable, creates green jobs, and contributes solutions rather than problems," the coalition said.

They stressed the country’s just and rapid transition to clean energy is more relevant than ever as Filipinos grapple with rising fuel and food costs brought about by the Russian invasion of Ukraine. Consumers are also not assured of stable energy due to shutdowns of baseload power plants.

Just transition refers to an inclusive energy transition that is fair to everyone, and considers the communities that will bear the worst impact from such transition.

Investing in renewables is also needed as the impacts of climate change are increasingly being felt, the groups said.

A report released by the Intergovernmental Panel on Climate Change, a body of scientists convened by the United Nations, stressed that limiting warming to just 1.5 degrees Celsius involves "rapid and deep and in most cases immediate greenhouse gas emissions reductions in all sectors." The Philippines committed to slash carbon emissions by 70% by 2030, but a bulk of this pledge is hinged on foreign assistance and funding.

The IPCC report said that electrification with renewables will not only mitigate the impacts of climate change but will also enhance health, employment and equity.

Although the Philippines banned the construction of new coal-powered generators in 2020, it will need a decade or so before it could kick its coal dependence, experts said. Currently, 60% of the country’s generated power comes from coal.

The Philippines is one of the countries most at risk from climate change. Despite the magnitude of the crisis, conversations about it have been largely missing from the election campaign.

In forums and interviews, candidates addressed environment and climate issues within the framework of disaster response, citing the need for climate-resilient infrastructure and a “super agency” for disaster resilience and climate change.

CEED’s Arances said that while the absence of coal discussion in election campaigns is "an advance in itself," the pronouncements of presidential candidates on developing renewable energy sources are mere generalities.

Robredo likewise supports the call for carbon neutrality, which refers to a balance between carbon emissions and their absorption, by 2050.

Manila Mayor Francisko “Isko Moreno” Domagoso said he plans to develop agrovoltaic energy, or the simultaneous use of land areas for both solar photovoltaic power generation and agriculture.

Labor leader Leody de Guzman has been consistent in rejecting the use of planet-warming fossil fuels and pushing for a rapid transition to renewable energy, noting the country’s abundant clean energy potential waiting to be tapped. He also vowed to shut down coal plants in the first two years of his term.

Arances said the Power 4 People Coalition will not endorse electoral candidates, but will call out the aspirants who have problematic stances on energy transition.

Detours from genuine RE transition

Sen. Panfilo "Ping" Lacson is backing the inclusion of nuclear energy in the power mix, claiming it is the "cleanest and cheapest energy source." Environment groups have stressed that nuclear energy is dirty and destructive.

The administration tandem of Marcos and Davao City Mayor Sara Duterte-Carpio believes that nuclear energy will lower electricity rates. Marcos also said the country should look into reviving the 621-megawatt Bataan Nuclear Power Plant, which was mothballed in 1986 because of safety concerns.

For Robredo, since there is currently no roadmap that specifies how to achieve carbon neutrality by mid-century, liquefied natural gas is the "only practicable option" for this transition. A 2021 report of the Institute for Energy Economics and Financial Analysis found that only 29% of LNG projects in the Philippines are viable.

According to Greenpeace’s Khevin Yu, using fossil gas as a band-aid solution to help the country transition to cleaner renewable energy poses danger to the environment and people’s health as it emits methane, which is more potent than carbon dioxide in trapping heat in the atmosphere.

"Any detour, any false solution on achieving 100% renewable energy is a setback not just for the current generation, but more so for the future generation," he said. 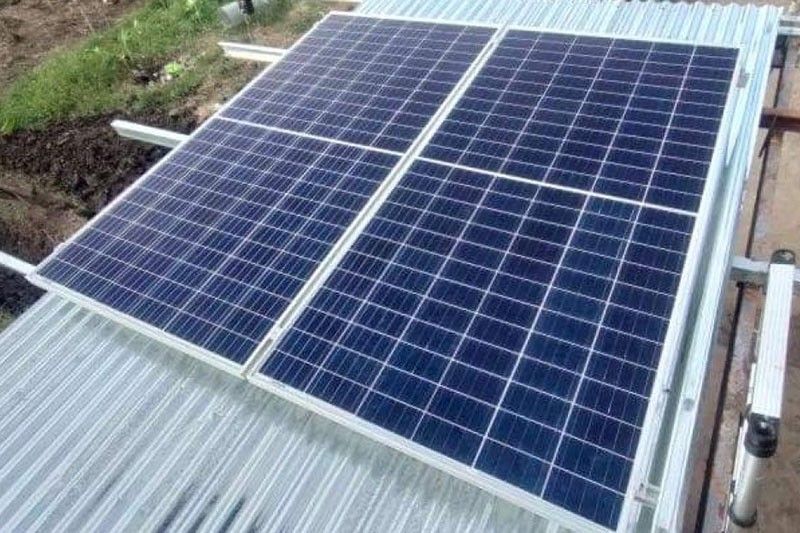 This solar photovoltaic system powers a communal charging station and a hydroponics greenhouse where residents of Purok Ilaya in Bacolod City grows vegetables. Photo from Center for Energy, Ecology and Development

For campaigners, the country’s next leaders should start the shift to renewable energy by raising its share in the energy mix to 50% by 2030. The current ambition for RE is only at 35% in the mix by 2030, which Arances said is “too low.”

By 2040, the government is eyeing 50% share of renewable energy in the country’s overall generation mix.

Arances said the first steps of the next administration should also include retiring the oldest coal-fired power plants, which are the culprits behind rotating brownouts, and stop the expansion of gas infrastructure in the country.

The nation’s next leaders should also make the environment for renewable energy investments and expansion conducive by providing support to clean energy developers, Arances said. He added that financial institutions should emulate the loan program of state-owned Development Bank of the Philippines, which provides funding support to solar power developers.

"[We cannot afford] another decade of detour away from harnessing affordable and clean energy that is domestic. The next administration will be in a very critical phase because it’s the last decade that will dictate whether we achieve 1.5 degrees Celsius or not," Arances said.

"So this election will be very critical. We need to engage presidentiables who have positioned false solutions to energy transition," he added.

Negros Island has been called the “renewable energy capital” of the Philippines as it boasts of an installed generation capacity of nearly 100%.

But Rivera lamented how their community — Purok Ilaya — stayed unelectrified for as long as she could remember when clean energy sources were available locally.

"We’re really thankful to CEED for granting our wish that we cannot be unelectrified forever," Rivera said.

“[To those running in the elections], they should pay attention to marginalized communities without electricity.” 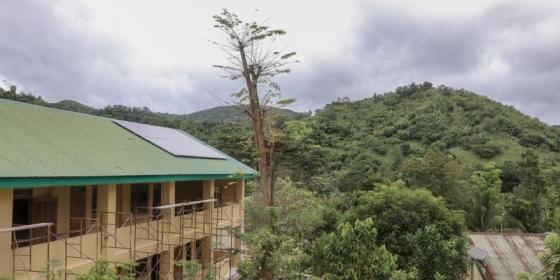 Barangay Laiban in Tanay, Rizal is just 30 minutes away from the town’s main road, but the settlement of around 700 people has been left behind not only in electrification but also in education.

Raquel Villanueva, 68, had doubts when their town’s agriculturist in Milaor sent her a message that a non-governmental organization was ready to give them assistance after Typhoon Rolly (international name: Goni) devastated their town in Camarines Sur province.