Raquel Villanueva, 68, had doubts when their town’s agriculturist in Milaor sent her a message that a non-governmental organization was ready to give them assistance after Typhoon Rolly (international name: Goni) devastated their town in Camarines Sur province.

Raquel Villanueva inspects her rice field in Milaor, Camarines Sur. Villanueva is among the farmers who received assistance in the form of vegetable seedlings as part of Oxfam and Rice Watch Action Network’s assistance for their Typhoon Rolly (Goni) Recovery Program. (Photo: Juanito Bantong/Oxfam)

“Due to past experiences, I did not believe that we were actually going to receive help,” Villanueva said. “Two weeks later and after asking for inspiration from above, I received a text from Rice Watch Action Network (RWAN) regarding hydroponics.”

RWAN is a non-governmental organization committed to assisting communities of farmers build resilience through sustainable livelihood, promotion of low-cost technologies, and enhancing their adoptive capacity. For the Typhoon Rolly Recovery Program, Oxfam Philippines supported RWAN in providing assistance for several towns in Camarines Sur. This included hydroponics training and supplies. Hydroponics refers to a production method where plants are grown in a nutrient solution instead of soil.

That fascinated Villanueva, who lives in Balagbag village, a flood-prone village in their town.

“Even without a typhoon, as long as there are extended rainfalls, our village will always be submerged under water,” she said.

Villanueva was quick to suggest to RWAN to talk to their association of farmers.

But the hydroponics was just the start of the many benefits to come to Villanueva and their farmer’s association.

The Buenavista-Balagbag Small Farmer’s Association consists of 53 farmers that have to maneuver small boats across rivers to get around their farms.

"Milaor is a flood-prone area," explained Gary Perlado, area development staff for RWAN. "They are vulnerable to floods so they always have to harvest their crops before any unfavorable weather."

They were given a Solar Bubble Driver (SBD) that was developed by the International Rice Research Institute (IRRI), the Hohenheim University in Germany and GrainPro.

While the drying bubble relies on its transparent top and the power of the sun to speed up the drying process for the grains, its blower can either be powered by electricity or solar panels.

“These two have been quite helpful to us. The hydroponics helped us gain extra income and savings, and with the solar dryer, we learn to live during the wet season,” Villanueva said.

She said they were tired of receiving canned sardines and instant noodles from politicians.

“With what the politicians are giving us, we will only live for a week,” Villanueva recalled. “If you want to help us, do it with something that will help us (sustain our work).”

Typhoon Rolly, the world’s strongest typhoon that made landfall in 2020, left widespread damage and destruction throughout the Bicol region. Milaor, Villanueva’s hometown with 20 villages, was not spared.

Seventeen of its barangays recorded flooding according to the reports sent by the Municipal Disaster Risk Reduction and Management Office (MDRRMO) to the Office of Civil Defense (OCD).

Throughout the Camarines Sur province, ‘Rolly’s’ damage to agriculture was P1.1 billion or $21.8 million, according to the OCD.

RWAN Executive Director Hazel Tanchuling said that the SBD is part of their organization's and Oxfam’s promotion of low-emission technologies in the agriculture sector.

“They are very important especially in the case of Bicol since Bicol has a Type II climate because it is on the eastern seaboard, meaning it has shorter dry seasons,” Tanchuling said. “And especially during the harvest time of October and November, it’s rainy.”

While the solar dryer helps the farmers dry their palay, it also solves another problem for the Villanueva.

“When you harvest the palay, I don’t know if you can call it ‘pagsasamantala’ (exploitation), but [rice traders] will say all sorts of things and will buy your produce for a very low price,” she said, explaining the play soaked in rain would get discolored. “Where does that lead the farmers? We can’t sell it to other traders because the market is being monopolized.”

Freshly harvested rice, those that did not undergo drying before being sold to the market, are bought by rice traders for as low as P12.50. Just to break even, farmers and Villanueva need to sell their rice for at least P15 per kilo.

Adding to their burden is the Rice Tariffication Law that was passed a year before the COVID-19.

“We’re already on our knees, but we continuously get trampled on. They are burying us even more in the mud,” she said.

Villanueva said elderly farmers like her don’t have any problem setting up the solar dryer.

“It’s so easy to operate. Even at my age, it’s very easy for me and it’s not hazardous to my health because I don’t inhale dust from the palay,” she said.

Augusto Molleda, the Buenavista-Balagbag Small Farmer’s Association president, said that the solar dryer is helpful even to non-members who borrow the equipment for only P150 for 12 hours. One dryer, which is supported by an electric-powered blower, can fit up to 500 kilos or 10 sacks of rice.

Oxfam Philippines and its partner organizations implement solar and other sustainable solutions for its humanitarian projects to help limit global warming. For this year’s World Humanitarian Day, organizations are highlighting the need to address the climate crisis, which has already affected millions of people, especially those from vulnerable groups. 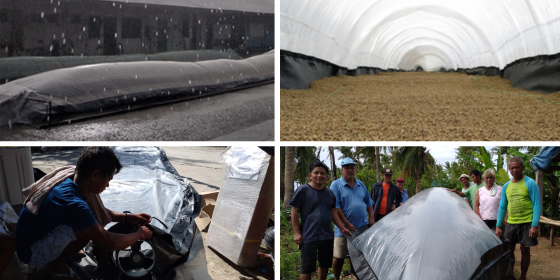 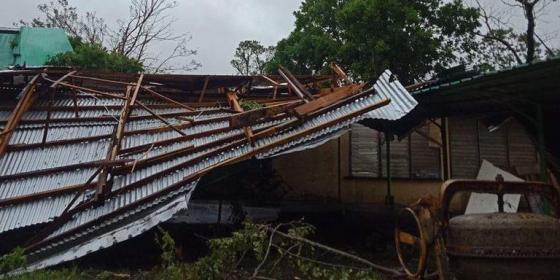