How reproductive health conversations benefit far-flung villages during a pandemic 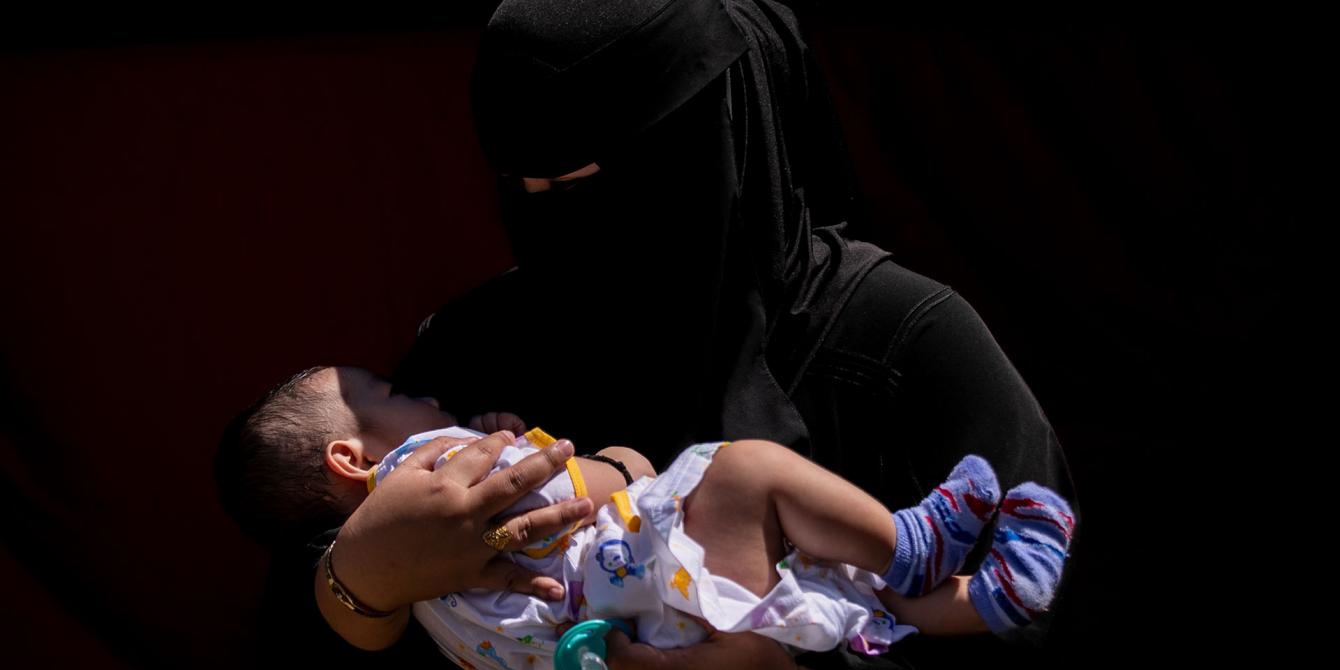 It was a busy day at the health center in Ganassi, a small rural municipality of 32 villages in the province of Lanao del Sur. Mothers carrying their infants were falling in line to get vaccinated while health workers take turns welcoming patients.

It is market day in Ganassi and residents from far-flung villages take the time to visit the town center where government offices are located. 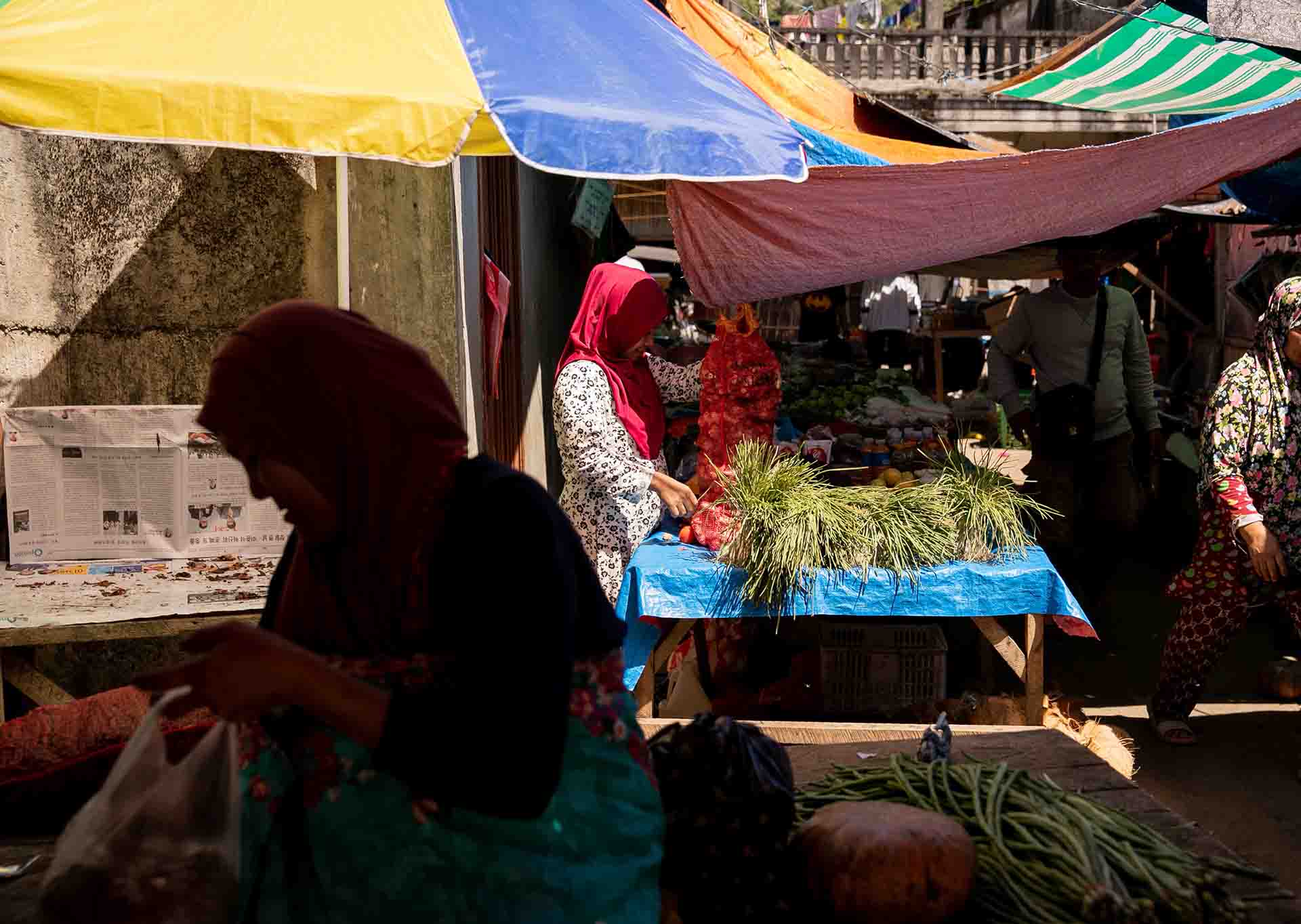 "We are happy when mothers take this opportunity to go to the health center and avail of our services. The more they come, the more we feel that we have been effective in educating them about their sexual and reproductive health rights,” said Alnairah Aminola, a barangay health worker from the village of Pindulunan and also the vice president of the Advocates of Ganassi Multisectoral Organization, which is an organized group of peer educators supporting Oxfam Pilipinas’ Sexual Health Empowerment (SHE) program.

Alnairah explained it was only after SHE Project teams actively conducted seminars and family conversations in Ganassi’s villages that women in geographically isolated areas realized the importance of family planning and recognizing the rights of children. The family conversations are meant to bring families together to discuss prevention of gender-based violence and the importance of adolescent sexual reproductive health. 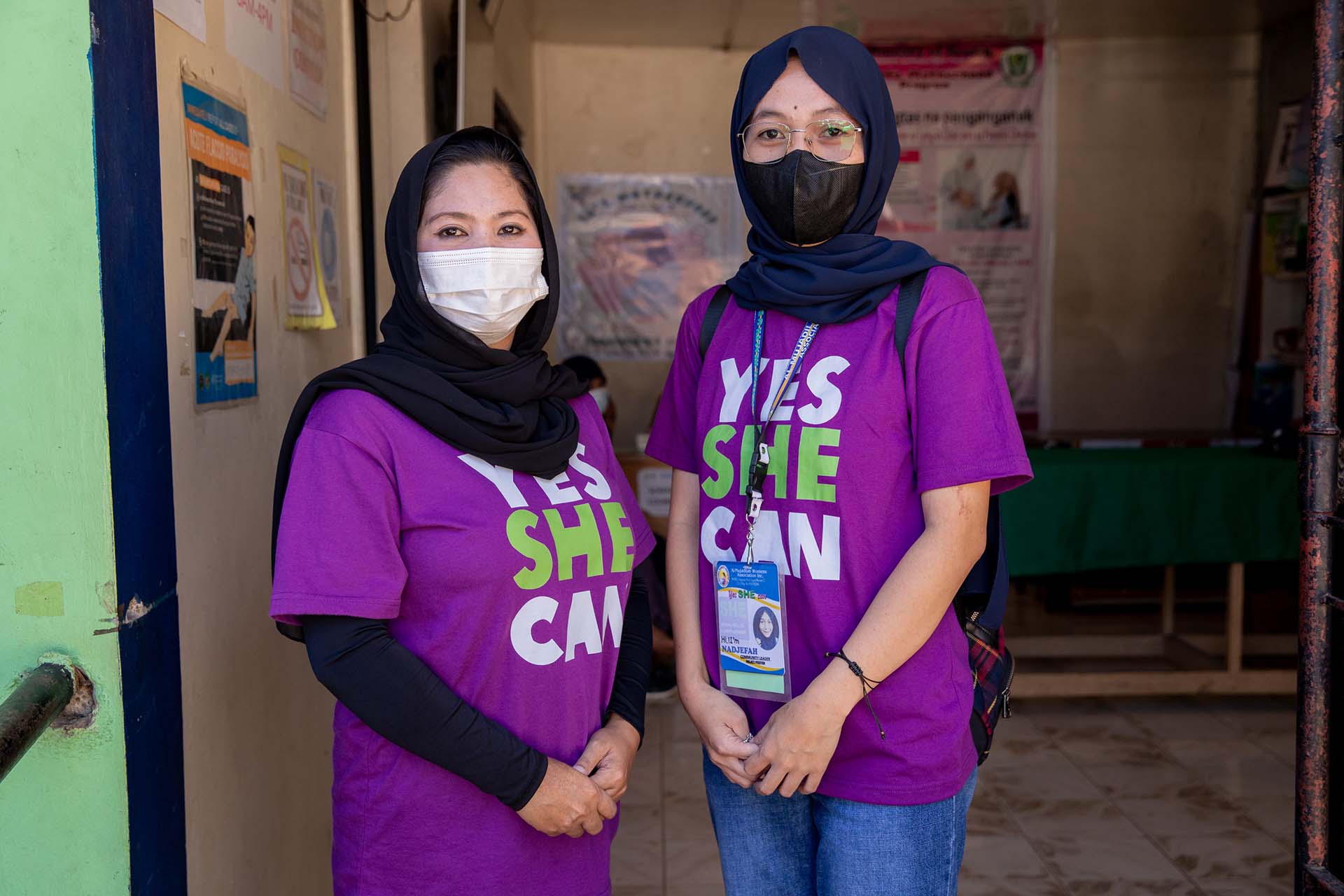 “Oftentimes we found the men resistant so we organized trainings for them too. We now have volunteers from the youth, teachers and religious leaders,” Alnairah said. “We have seen improvements (in pregnancy rates, spacing between births, etc.). I remember when I had to cater to more than 30 pregnancies in a year or roughly two to three mothers every month. This year, I haven’t counted to ten. Also, we have seen less teenage pregnancies resulting from early marriages.”

No mother too far

The work is even more challenging for health workers in the remote villages like Batobatoray where barangay health worker Aslainah Nasser is based. These are villages that can only be reached through dirt roads.

Aslainah, a barangay health worker from Batobatoray said, “Families from our areas are the most impoverished and underdeveloped. Even if mothers are willing to go to the rural health unit for their check-up, travelling can be tedious as well as expensive. So we make an effort to reach them. We believe no mother is too far away for committed health workers,” Aslainah said.

Juhanie Ahmad, a barangay health worker assigned in the far-flung village of Pantaon, said it was doubly difficult for them during the height of the COVID-19 pandemic. “One expectant mother died because she did not want to give birth in our facility. We tried to convince her but she was afraid of the risk of being exposed to the virus and she did not want to be quarantined. Her pregnancy was considered high risk as it was already her 15th child,” Juhanie said. 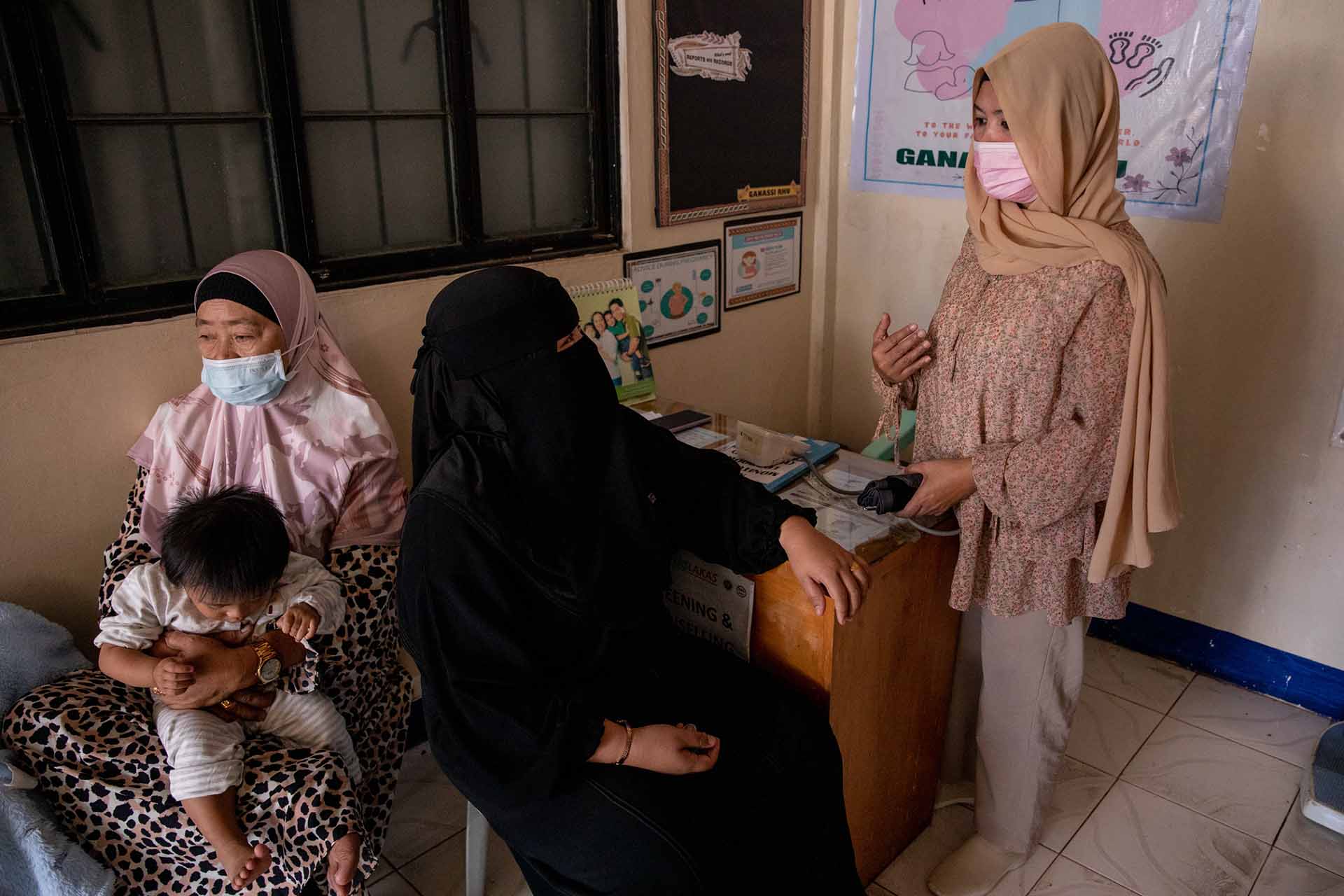 Alnairah Aminola, right, talks to patients as they queue for health consultations inside a clinic in the town of Ganassi, Lanao del Sur, southern Philippines. (Photo: Basilio Sepe/Oxfam Pilipinas)

"They were among the first to bring hygiene kits and face masks when the COVID-19 pandemic hit. At the same time, they conducted seminars that gave women as well as men education on how to use contraceptives. They reiterated the need to make the effort to submit themselves to pre-natal check-ups and possibly move to an area near the clinic to prepare for the birth of their child. We are very thankful for these initiatives,” the village head said.

Alnairah beamed with pride seeing how their efforts are bearing fruit and this makes her more confident even as she anticipates more challenges ahead.

She cited as an example the varying opinions of community leaders on the recent passage of a law imposing penalties on early and child marriages. “We in SHE and AGAMA (Advocates of Ganassi Multisectoral Association) see the law as a step forward. But in the course of getting the legislation passed, so many leaders felt efforts to consult the grassroots and actively disseminate information were sorely lacking. Now we are doubling our efforts to reach out and educate families about the new law. I believe it will be easier now because it has been almost five years since we sowed seeds of knowledge and we have already gained the respect of our communities.” 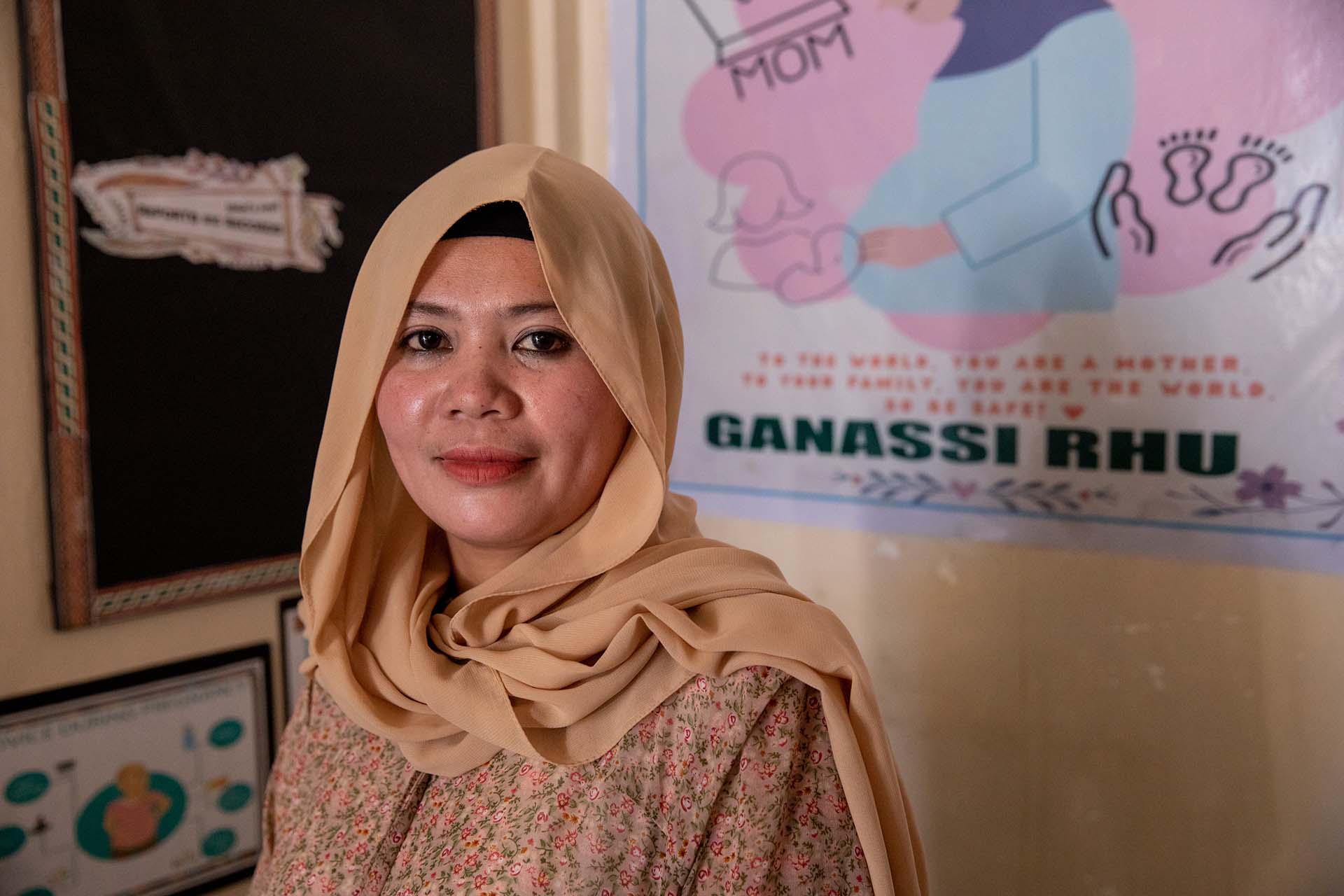 Alnairah Aminola, 38, poses for a picture inside a health clinic in the town of Ganassi, Lanao del Sur, southern Philippines. November 15, 2022. Alnairah participates in the Sexual Health and Empowerment (SHE) Project and local and regional consultations on women's health and issues. (Photo: Basilio Sepe/Oxfam Pilipinas)

Al-Mujadilah Women's Association Inc. (AMWA) is a SHE partner organization that was instrumental in organizing the Advocates of Ganassi Multisectoral Association, which helps implement the SHE Project in the municipality. Naseha Omar, SHE program coordinator for AMWA, explains how despite humble beginnings, establishing the local multisectoral network became key to sustaining the program in Ganassi.

“We started really small. We didn’t have much resources and the community leaders back then were very wary. We faced the challenge of being suspected as terrorists trying to infiltrate their communities. At that time, the neighboring city of Marawi has not recovered from the 5-month siege so they were unreceptive at first. But after months of painstaking work, carefully explaining the advocacies we saw how they slowly became warm and welcoming,” Naseha said. 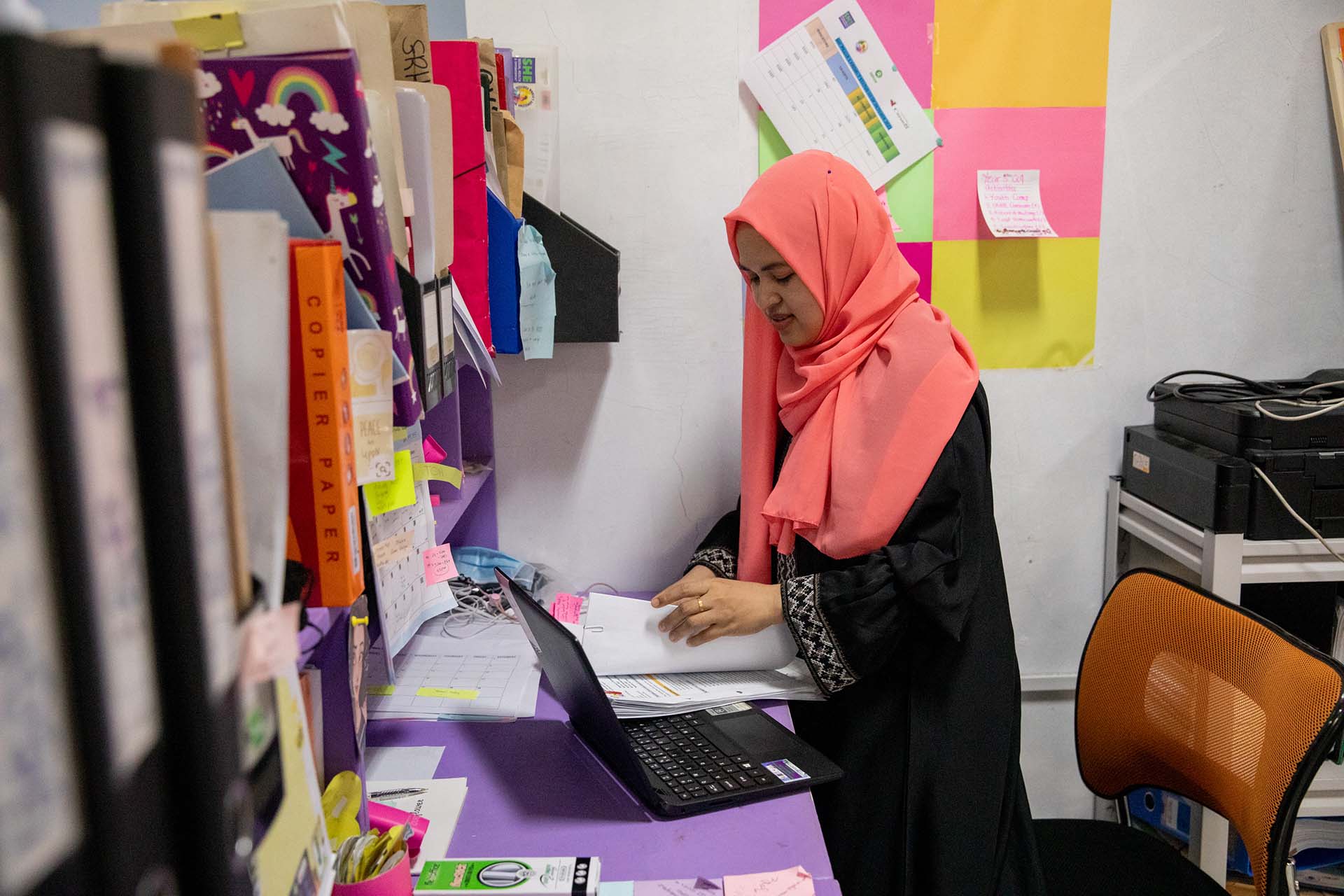 Naseha Omar, 34, works on at her desk inside an office at the Mindanao State University in Marawi city, Lanao del Sur, southern Philippines. November 15, 2022. Naseeha is a project coordinator of the Sexual Health and Empowerment (SHE) Project, which aims to address issues such as teenage pregnancy and child marriage. (Photo: Basilio Sepe/Oxfam Pilipinas)

Alnairah says there are times when volunteers like her feel tired, financially burdened or frustrated.

However, she said, “We are very thankful that the SHE program arrived in Ganassi. It gave our work as barangay health workers more depth and meaning. We became advocates, not just health workers.”

“There will be days when we will think of giving up on our advocacies but when you think about how your community relies on you, you are fueled to continue. When we see more families becoming committed to advancing sexual and reproductive health rights, I and my fellow health workers and volunteers find a sense of fulfillment that keep us going. All these make me very happy, proud and very optimistic for the future generations of Ganassi,” Alnairah said.#