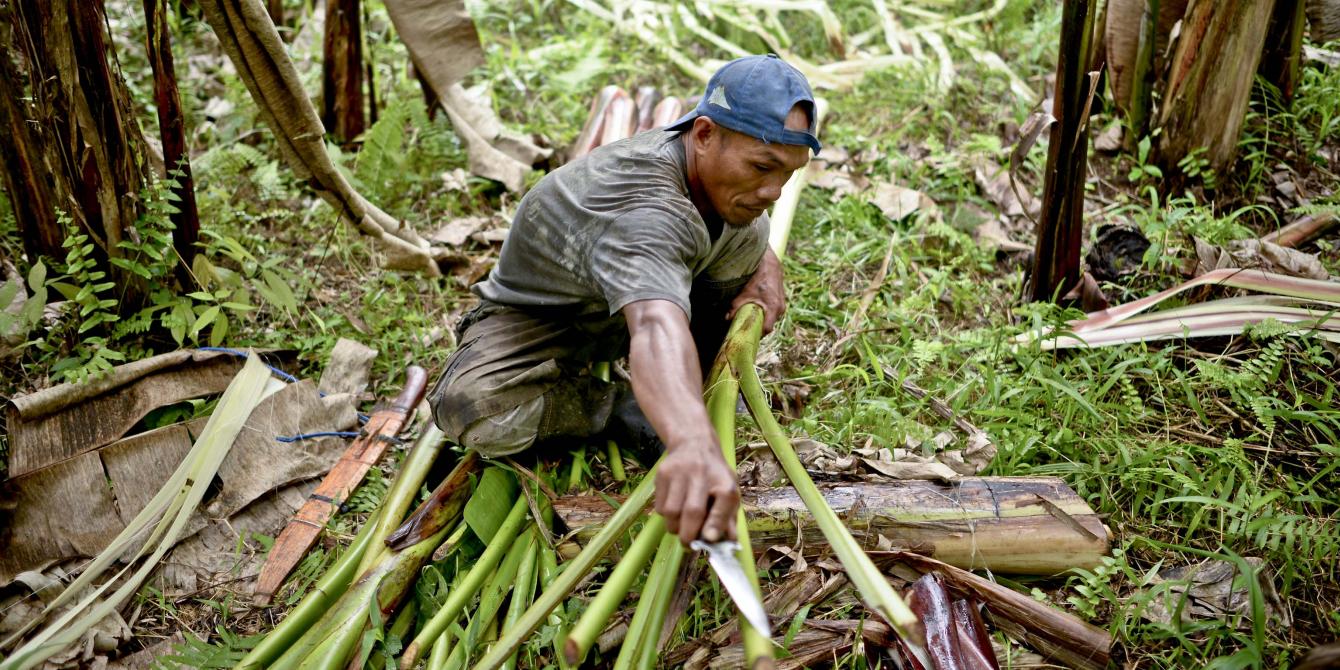 ADAPTATION. A Manobo farmer in Lanuza, Surigao del Sur harvests abaca in October 2016. Abaca harvesting and stripping provides indigenous tribes in the municipality with a climate-resilient source of income, and was introduced as part of the BINDS (Building Resilient and Adaptive Communities and Institutions in Mindanao) project implemented by Oxfam and NGO partners from 2012-2015, with support from the Australian Government. Photo by VJ Villafranca/Oxfam

Reacting to the recent approval by the People’s Survival Fund (PSF) board of two project proposals submitted by the local government units of Lanuza in Surigao del Sur and Del Carmen in Surigao del Norte, Justin Morgan, Oxfam in the Philippines Country Director, said: “Oxfam congratulates the two LGUs and all their partner NGOs and communities for having secured much-needed funds to help them adapt to the harsh realities of climate change.”

“Oxfam is proud to have been a partner of the two LGUs in implementing climate change adaptation projects in the past, and we look forward to learning more about how they will use the PSF grants to enhance their resiliency and put vulnerable groups, such as women, children, the elderly and people with disabilities in a position where they can grow and thrive despite the uncertainties associated with climate change,” Morgan added.

Oxfam worked with the LGUs of Lanuza and del Carmen from 2012 to 2015 in the implementation of the BINDS project (Building Resilient and Adaptive Communities and Institutions in Mindanao), which was supported by the Australian Government’s Department of Foreign Affairs and Trade (DFAT).

Through the collective action of all stakeholders, the BINDS Project helped improve the ability of communities and local institutions to build livelihoods that could withstand climate change, develop their own climate-sensitive strategies, and enhance their skills and knowledge on responding to disasters and adapting to climate change.

In 2010, Oxfam jointly campaigned with the Institute for Climate and Sustainable Cities (ICSC) and other NGOs to urge Congress to enact the PSF Law. Oxfam also provided technical support to LGUs, including Lanuza and del Carmen, in crafting project proposals that were submitted to the PSF Board.

“The approval of the first two projects is a much-deserved recognition of the hard work put in by all who were involved. The local government officials, NGO partners and community members, who trooped to Congress way back in 2010 to 2011 to persuade legislators of the need to have a PSF Law, and who over a period of two to three years, formulated their highly technical project proposals in a participatory and consultative manner. They have demonstrated themselves to be true champions of local climate change adaptation, and continue to inspire other LGUs to act and make their own communities and institutions truly resilient,” Morgan said.

Noting that this is the first time projects have been approved since the enactment of the PSF Law or Republic Act 10174 in 2011, Morgan added:  “We urge the PSF Board to immediately act on pending proposals and ensure that the most climate-vulnerable and low-income LGUs are supported in their attempts to access the PSF. The Board should also review their current submission guidelines and introduce reforms to make these even more responsive to the realities of LGU, especially 4th to 6th class municipalities that lack the capacity to formulate not only their PSF project proposals but also their local climate change adaptation plans (LCCAPs) and vulnerability assessments.”

The Philippines is still considered to be one of the most vulnerable countries in the world in terms of suffering from the impacts of climate change. The PSF was created after the enactment of Republic Act 10174 as an annual fund to support local government units and accredited community organizations to implement climate change adaptation projects.