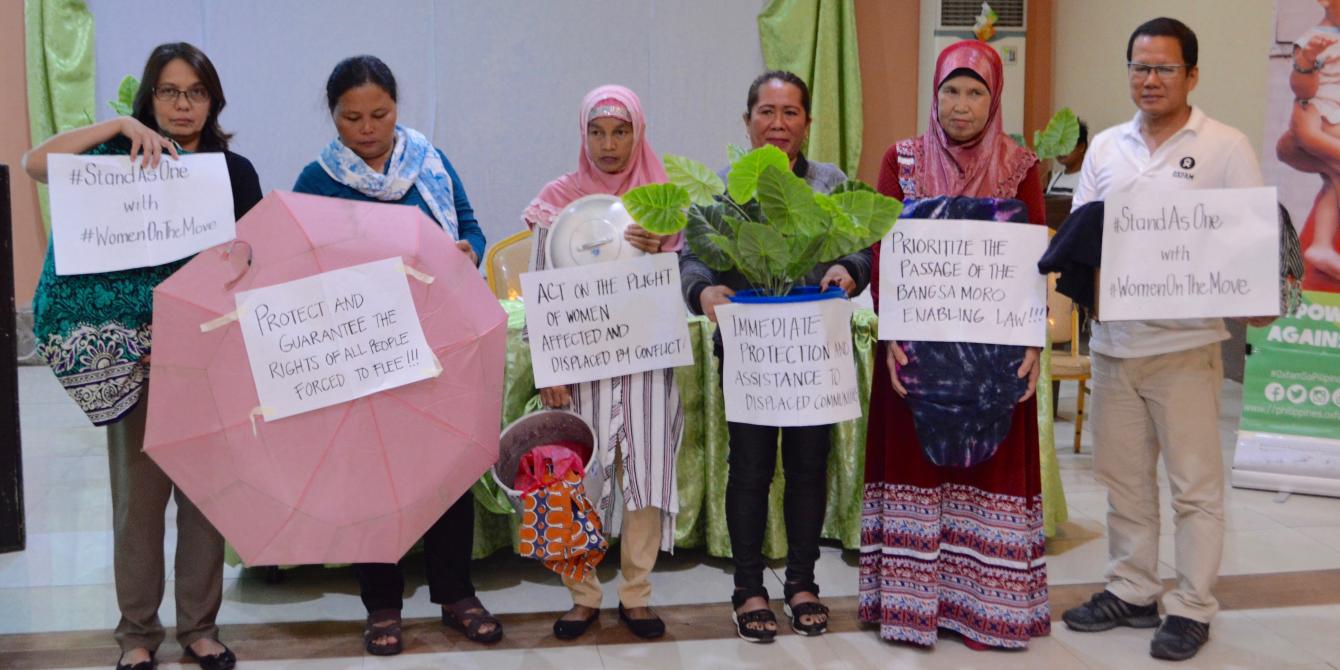 Some 224,000 people have been displaced or are at risk of being displaced from their homes due to ongoing conflict and natural hazards in parts of Mindanao, data from the UNHCR-led Mindanao Protection Cluster as of January 2017 showed.

In recent months, ongoing military offensives against the Bangsamoro Islamic Freedom Fighters (BIFF) and the Maute Group, as well as joint police and military operations against illegal drugs in Maguindanao, have compounded the situation, forcing hundreds of families scared of getting caught in the gunfight to evacuate. They have since returned to their homes as of March.

Families living in affected communities in central Mindanao expressed concerns about increasing violence in the area as the five-decade conflict drags on. Community leaders said women, who are left at home to take care of their families, are especially vulnerable.

(This is like a nightmare that recurs every time we hear the sound of gun shots. We no longer want to experience running away from danger to save our lives, staying in evacuation centers without knowing when we can go back to our homes, and waiting for relief to come.)

Just a few months ago, Josephine Panalon, the President of the Saniag T’duray Farmers Association  in Ampatuan, Maguindanao, and her community were forced to evacuate from their village for fear of getting caught in the crossfire during joint military and police operatives against illegal drugs. Most of her fellow T’durays still refuse to spend the night at home. Panalon said they only go back to their village during daytime to tend to their farms.

Other communities in central Mindanao are suffering worse conditions. Guiamelan Sanayutin, a woman leader from Datu Saudi, Maguindanao, has been going back and forth between her house and temporary evacuation centers for almost 10 years. Her family was first forced to flee when hostilities between government forces and the Moro Islamic Liberation Front broke out after an initial peace deal was declared unconstitutional. The government and the rebel group has since signed a comprehensive peace agreement but Sanayutin's family have not been able to go back to their homes permanently as the conflict drags on.

(The dead are better, they have stopped fleeing to evacuation centers. Unlike us, we still have to go back and forth. What about our livelihood? We are trying our best to cope. Women took the initiative to build tents in evacuation centers. We are calling on you to please take notice of what is happening to us down here.)

In a media conference in Cotabato City on Thursday, March 30, international humanitarian organization Oxfam and local partners Community Organizers Multiversity, United Youth of the Philippines – Women and Pambansang Koalisyon ng Kababaihan sa Kanayunan, called on the government to address the immediate needs of displaced families, as well as move forward with steps towards building lasting peace in Mindanao.

“It is high time that we listen to the plight of civilians who are caught in the middle of the conflict. We call on the national government to protect all women, men and children who are forced to evacuate and are at risk of getting caught in the crossfire by ensuring that local protection mechanisms are in place,” a statement from the groups said.

“The peace process, especially the swift passage of an enabling law that would implement the Comprehensive Agreement on the Bangsamoro, must be prioritized and women’s voices and peace agenda must be heard, the groups added.

Oxfam is running a global campaign to advocate for the immediate protection of affected and displaced civilian communities around the world. #StandAsOne

As of June 2015, 65.3 million people all over the world have been forced to flee their homes due to conflict, persecution and human rights violations. Of the number, 41 million people were displaced within their own country, and their plight is often less visible than people who cross national borders.