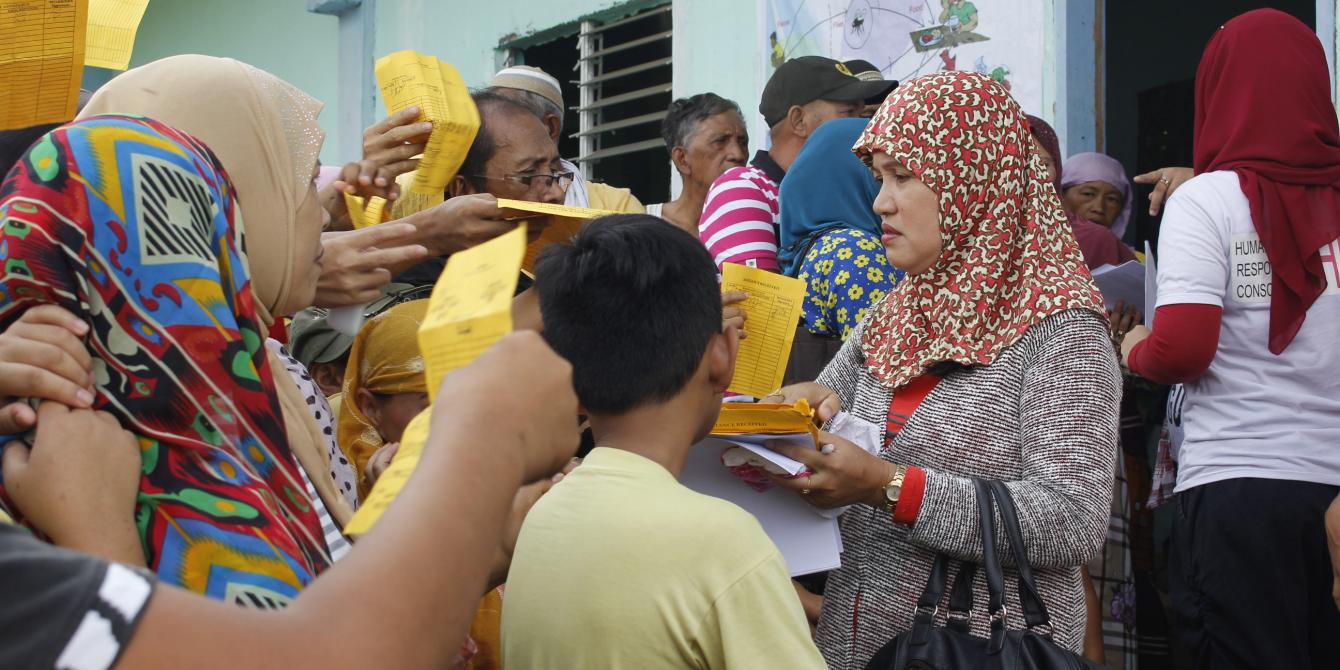 Armed clashes continue to ravage Marawi City on day 18 of the harrowing crisis, but just 18 kilometers away, women brave many challenges as they lead the delivery of life-saving aid to some of the 220,000 civilians affected by the conflict.

“During conflict, the population of women in evacuation centers is bigger than men. Women affected by conflict are more vulnerable to sexual harassment and other forms of gender-based violence. Thus, it is crucial to have women at the frontlines of giving humanitarian aid. We understand women’s needs better,” said Sakina*, a young Moro woman from the Marawi-based group Al-Mujadilah Development Foundation (AMDF), as she worked at an evacuation center in Balo-i, Lanao del Norte, north of Marawi City.

“It is a challenge to work during the Ramadan period. As an aid worker, most of my work involves talking to affected civilians and translating for non-Maranao speaking aid workers. My energy easily gets depleted,” shared Sakina. “But more than fasting, Ramadan is about patience and sacrifice. At the end of the day, it is a very rewarding feeling, knowing that I’ve helped people.”

AMDF is a Marawi-based non-governmental organization (NGO) composed mostly of Muslim women. The group took its name from a chapter in Qur’an, "Al-Mujadilah (Al-Mujadalah)" which means "The Woman Who Seeketh (Justice)." Aside from providing aid during crisis, AMDF also works on peace-building initiatives and on empowering the women of Muslim Mindanao. AMDF is one of the local NGOs tapped by the Humanitarian Response Consortium (HRC), Oxfam’s partner in the Marawi disaster response.

“It is a challenge for AMDF to work because they are also affected by the crisis, and were displaced. But they are more than willing to help our partner, HRC, providing life-saving information and mobilizing volunteers,” said Cathy Gordo, currently the response manager of Oxfam. Cathy is the woman at the helm of the international aid agency’s humanitarian operations in the Marawi crisis, coordinating with partners who are leading the response.

Urgent needs of women affected by the Marawi crisis

According to the women leading the aid assistance, the needs of women, children, and senior citizens in evacuation centers are growing as the crisis nears its third week. Cathy emphasized the vulnerability of these sectors during disasters.

Cathy also highlighted the evacuees’ urgent need for cash. Aside from the distributed food packs, women, as caregivers, also need money to address the other needs of their family.

“At this point, we are more than grateful having survived the conflict, and being supported by the government and by NGOs,” said Nurhaina*, a wife and a mother of four, currently cramped with seven other displaced families in a classroom, in Balo-i. “The challenge for us now is where to find money. Like other evacuees, we all fled Marawi City empty-handed. My husband has been struggling to find odd jobs so we can buy basic needs like firewood that we use for cooking. This costs us PhP30-PhP50 per day, which is too much for us at this point.”

Aside from local NGOs, HRC and Oxfam continue to work side by side with government in delivering assistance to those affected by the crisis.

“It is important that issues that came up during the response in previous conflicts will no longer arise in the Marawi response,” said Cathy. “We cannot emphasize enough how women and children are differently affected by conflict. Thus, it’s important for the government to listen to their voices.” //ENDS

*Not their real names to protect them and their families.