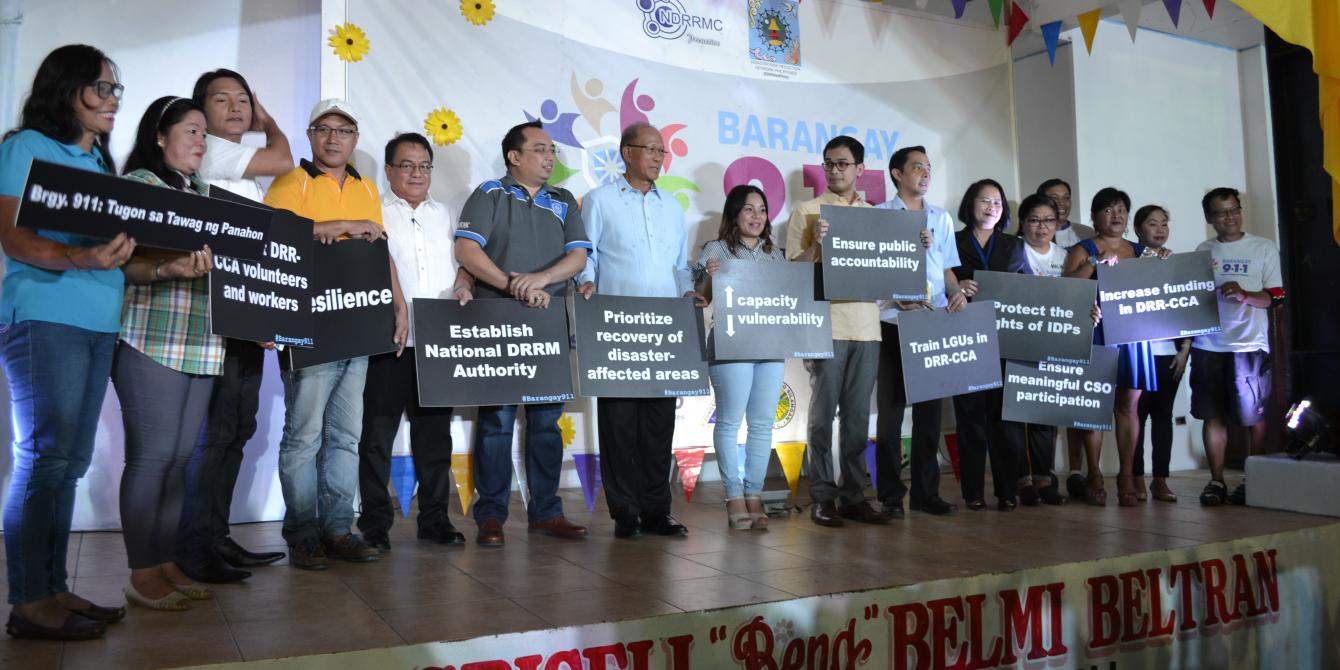 The nine calls to action are the main messages of the 911 campaign initially launched after the State of the Nation Address of President Rodrigo Duterte. The campaign is now being rolled out at the community level and is called the Barangay 911: Tugon sa Tawag ng Panahon, to amplify the network’s proposals for legislative reforms in the current DRRM law, heighten awareness, and generate support.

“We believe that our work towards resilience should be community-based, inclusive, and empowering but the national government must take the lead in institutionalizing policies that would improve the Philippines’ risk reduction and management system,” said DRRNetPhils lead convenor Malu Fellizar-Cagay.

Barangay 911 represents nine policy calls guided by one agenda: building one resilient Philippines. The campaign seeks to highlight model communities that demonstrate how political will and the involvement of all sectors of society go hand in hand in dealing with disasters.

These are the nine calls:

The Philippines is consistently ranked as one of the most disaster prone countries in the world.

October 13 marks the International Day for Disaster Reduction – the date designated by the United Nations to promote a culture of disaster reduction around the world.  This year, the theme focuses on reducing deaths due to disasters - the first of the seven targets of the Sendai Framework, which outlines seven global targets and four priorities of action for disaster risk reduction.

"As weather-related disasters become more frequent due to climate change, the Philippines must not lose the momentum in taking urgent steps to reduce and avoid risks by investing in long-term solutions that would prevent the loss of lives during disaster situations,” said Oxfam Country Director Justin Morgan. Oxfam is one of the convenors of DRRNetPhils.

To put the spotlight on the Barangay 911 campaign, disaster risk reduction advocates and practitioners, as well as avid cyclists biked to Barangay Bagong Silangan – one of the areas hit hardest by Typhoon Ondoy (international name: Ketsana) in 2009. Residents shared stories of lessons learned after the typhoon and how they managed to cope after succeeding storms that hit Metro Manila and other parts of the country.

The event is organized by DRRNetPhils, together with Oxfam, the National Disaster Risk Reduction and Management Council, the local government of Quezon City and Cycling Advocates (Cycad) Pilipinas.