Oxfam Pilipinas on Tuesday released the findings of its study on teenage pregnancy, which shows the need for Filipino society to accept the reality and the power of teen pleasure and sexuality.

The findings of the qualitative study “Saying Yes to Whose Pleasures? A Feminist Study on the Acceptability of Pregnancies for Young Women” were presented during an event in Quezon City, two days after World Sexual Health Day.

“Teenage pregnancy in a predominantly Catholic country like the Philippines has always been controversial. This study seeks to better understand how the youth actually see themselves in relation to pregnancy and sexuality,” said Oxfam Pilipinas Country Director Lot Felizco.

Based on previously released government data, while the number of Filipino teenagers giving birth overall had been on a downward trend, there is an alarming increase of births among adolescents aged 10 to 14. “There is also an increase in ‘repeat pregnancies’ among girls aged 10 to 17 years old,” said the study’s author Sabrina Laya Gacad. However, she pointed out that the numbers do not fully reveal the situation of teenagers who face unexpected pregnancies.

The study, supported by the UP Center for Women's and Gender Studies (UPCWGS) and Oxfam Pilipinas as part of the Sexual Health and Empowerment (SHE) Project funded by the Global Affairs Canada, involved interviews with 39 Filipinas aged 15 to 24 years old from different parts of the country. All of the respondents were sexually active, while some were pregnant or had children at the time of the interview. 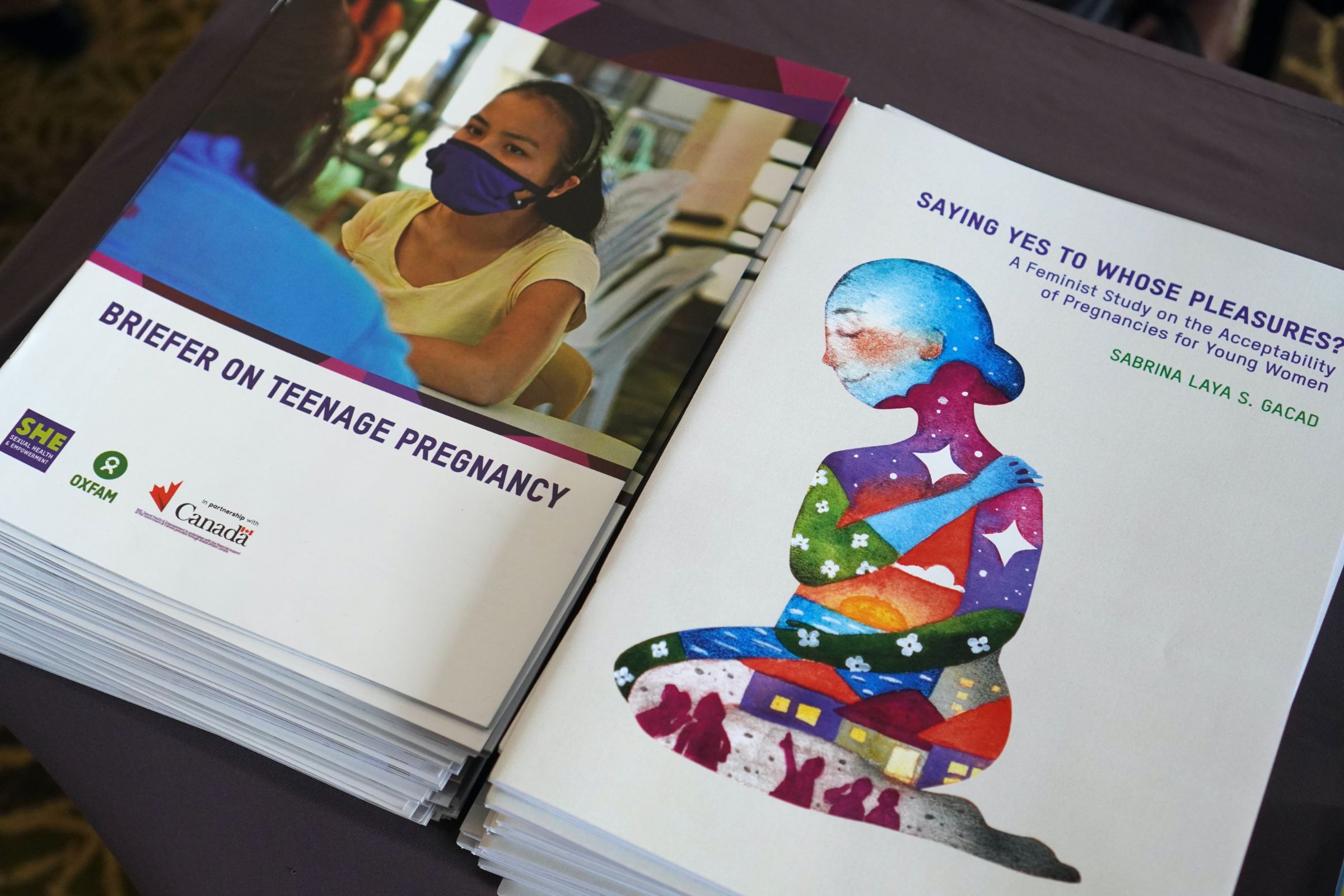 The study revealed that there is an “overwhelming acceptance of pregnancy among young women who had experienced it.” Their reasons ranged from seeing it as a blessing to simply accepting it because it had already happened.

“Pregnancy acceptability has more to do with ideas and expectations about motherhood, and the desire to make the most out of an unpleasant situation, than the circumstances around their sexual initiation,” Gacad pointed out.

The respondents gave various reasons for their early sexual initiation, ranging from being forced or coerced to “eventually” wanting it.

As the research findings pointed out, early sex and teenage pregnancies often occur amid the desire of male partners to have sex and start a family.

“Power dynamics are skewed against teen girls or young women when their partners are older and employ a combination of coercive or abusive tactics,” Gacad said.

The interviews also showed that abstinence worked only for partners who were of the same age. “Because if you are of the same age, you have the same environment, a young person can assert their desires against a possibly assertive male partner…What is worrying is how long women can keep saying no and their wishes are respected by their partner,” Gacad said, adding that this is why institutions need to come up with ways to support young women facing such situations.

“Without a clear and comprehensive vocabulary for their pleasures and their needs, adolescent girls and young women are unable to express consent and enforce their refusal. In taking an unexpected pregnancy to term, and in raising children, they limit their social or economic opportunities, while being expected to be good mothers who will put the well-being of their children above anything else,” she said.

Gacad also pointed out that perhaps government and civil society should rethink their approaches to teenage pregnancy.

“It’s not enough to say that teenage pregnancy is bad. It has to align with their desire, especially since there are some people who want to get pregnant at a young age,” she said. “Maybe we don’t need to change their desire for pregnancy but instead their idea of fulfillment as a woman.”

Gacad said teenagers should also be guided to see that there are other ways for women to be accomplished or be fulfilled. “Broadening that option for young women might change fertility preferences.”

The research author said there should also be a change in perspective among groups trying to address teenage pregnancy.

“You cannot stop pregnancies just by insisting on contraceptives uses,” she said. "If we wanted young people to take contraceptives, we must discuss why they would need to in the first place, which means discussing their curiosity about or desire for sexual intimacy.”

The study concludes that there is much to be done to “help young people turn their pleasure into greater power.” It does not help that society refuses to accommodate teen sexuality, attraction, pleasure and desire.

“For this power to grow, the undesirability of teen sexuality should be eliminated and the choice of teenagers to carry their pregnancies to term or prevent them completely must be met with material, health, and psycho-social support from loved ones and the public health and social welfare institutions,” the study read. 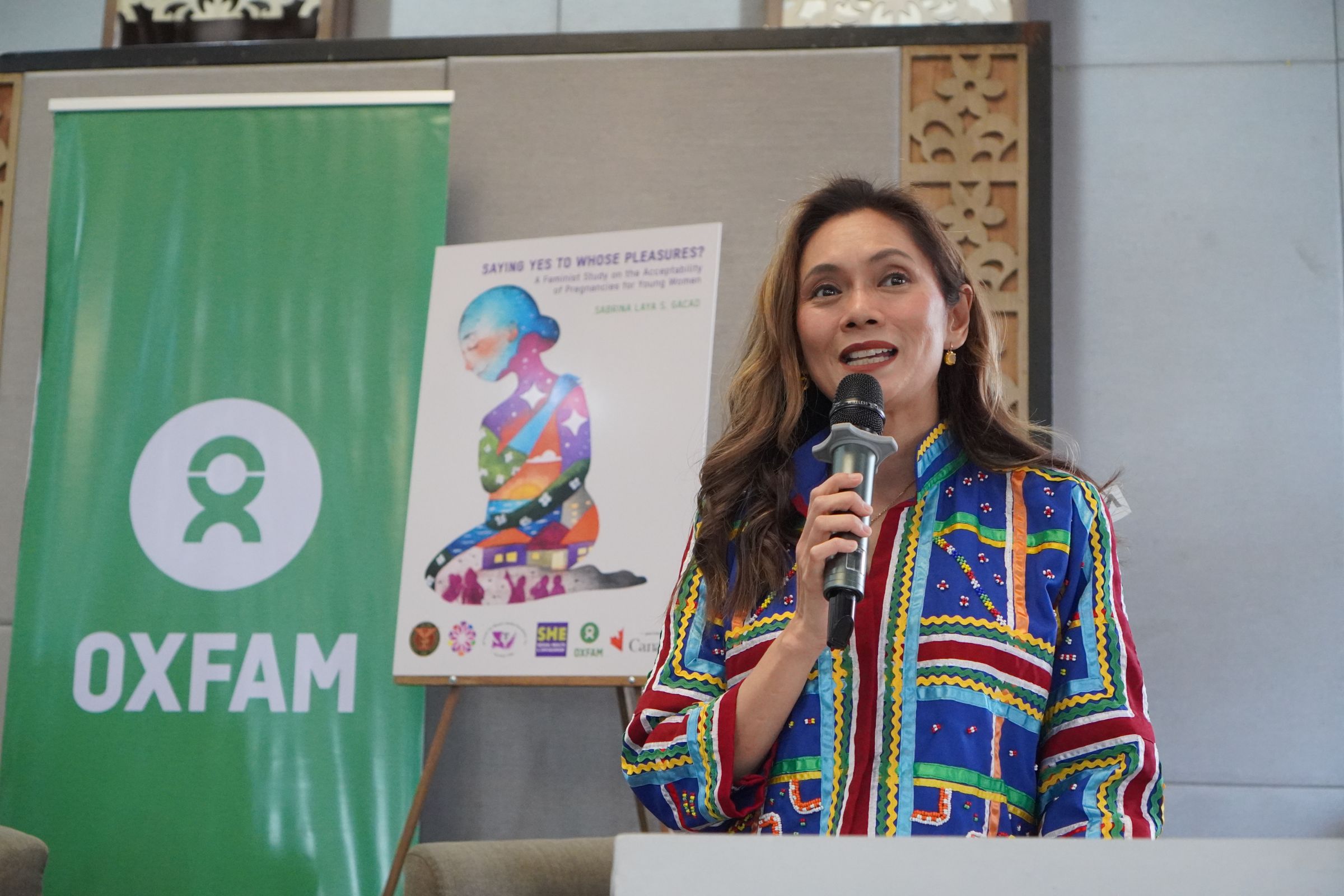 Nathalie Africa-Verceles of the UP Center for Women’s and Gender Studies said it is timely that Oxfam Pilipinas released the study in time for World Sexual Health Day, which “aims to raise awareness about sexual health, eliminate social and cultural taboos with respect to sexuality, and promote positive sexual health worldwide.”

She lauded the study for reframing teenage pregnancy and avoiding representing young women as powerless victims.

Africa-Verceles said the study sheds light on “the various structural constraints that pregnant young women contend with” and how young women, no matter how limited their power is, “make the best of what would normatively be considered an unfortunate situation.”

“Teenage pregnancy is a problem also because of society’s persistently puritanical views on sex. We refuse to acknowledge that adolescents have sexual rights, and insist that they should not be engaging in sex…[but] the reality is that they are engaging in sex, and the lack of access to quality sexual and reproductive health services will not hinder or stop them,” she pointed out.

Because of this, Africa-Verceles said teenage girls should “have a right to sexual and rreproductive health and rights (SRHR) information and services, which will protect them not only from early pregnancies and STIs, but also unsafe abortions.”

Representatives of The Graciella Collective, She Decides Philippines, Young Advocates for SRHR (Sexual and Reproductive Health and Rights), and the Young Feminists Collective also gave their reactions to the study during the launch. 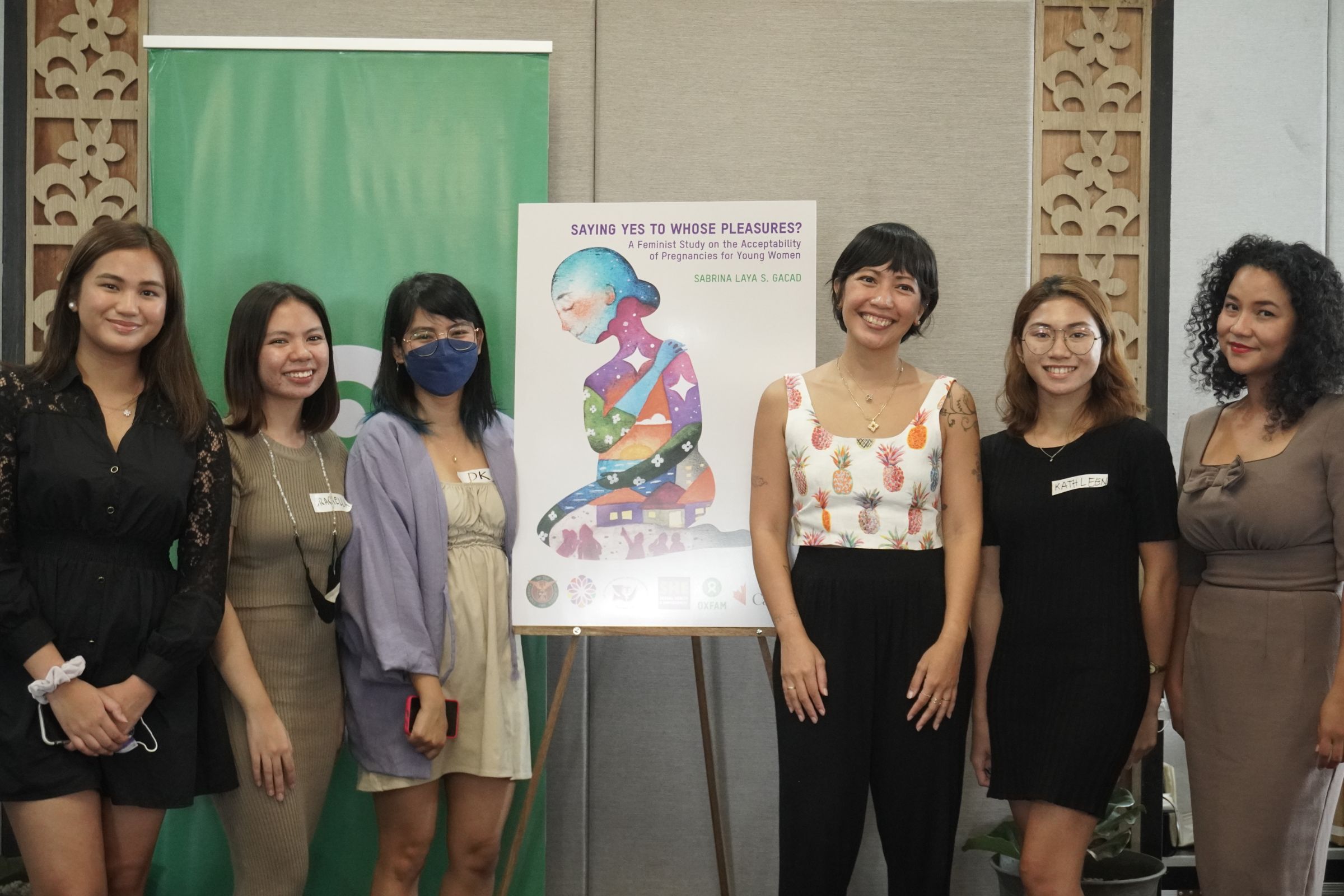 Graciella Moises, founder of youth organization The Graciella Collective, said the study shows that there is a need for “proper and immediate implementation of comprehensive sexuality education” that is culturally inclusive, gender-responsive, genuinely representative, rights-based and pleasure-centered. “We usually overlook pleasure, that we fail to realize that we’re also overlooking our rights—our right to safety, to comfort, to desire. Our right to bodily autonomy. Our right to sexual agency. Our right to satisfaction, and perhaps even intimacy and self-affirmation. When we take notice of women’s pleasure, we acknowledge the fact that their comfort is also important---their consent crucial, their agency an active key player in the intercourse.”

Kathleen Isaac of the Young Advocates for SRHR said, “There's a double standard in this society where teenage moms are met with derogatory words” while teenage fathers are lauded if they “take responsibility.”

“Ironically, men have an escape route but women are forced to live with early pregnancy,” she said. “And when it comes to services, teenage mothers don't receive the same care as other mothers. They should be able to access the same services and support.”

The other youth groups also called for inclusive and accessible sexual and reproductive health services, some of which currently discriminate against teenagers and unwed women.

Felizco said understanding the desires and pleasures of teenagers, which do not only involve sex as shown in the study, strengthens the shared goal of promoting sexual and reproductive health and rights.

She said groups should work together to “create an enabling environment where all individuals, including the youth, are capable of making their own informed and active choices towards safe, happy and healthy expressions of sexuality.”

“Through creating and sustaining such a safe environment, we are supporting individuals to say yes to their own pleasures, and amplifying their right to say no to acts that violate their rights and well-being, that expose them to risk, exploitation and discrimination,” she said.

During her closing statement, Oxfam Pilipinas Gender Justice Portfolio Manager Jeanette Kindipan-Dulawan said the study should make people rethink their personal perspectives towards sexuality, pleasure, and intimacy and how we approach the increasing cases of teenage pregnancy in the Philippines.

She said changing mindsets will not be easy but ultimately, she hopes that “young people can explore sexuality and pleasure without judgment and discrimination, people with diverse Sexual Orientation, Gender Identity and Expression, and Sex Characteristics (SOGIESC) can easily access information surrounding their sexuality, young men and boys take active roles in creating safe spaces and young women and girls are fully supported before, during, and after pregnancy.” 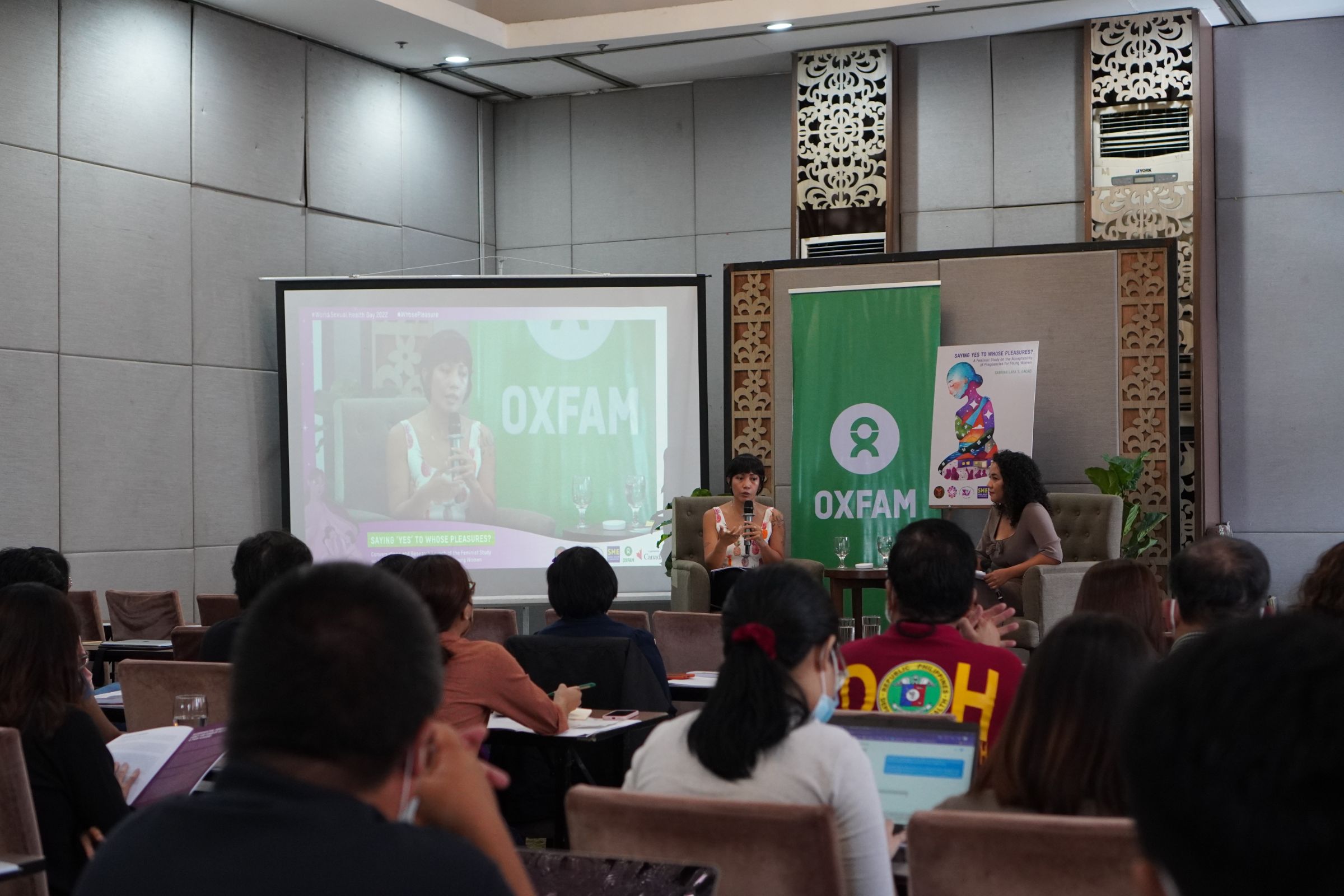 Saying Yes to Whose Pleasures? A Feminist Study on the Acceptability of Pregnancies for Young Women

This research is a qualitative, feminist inquiry into teen girls’ experiences of sexuality, their deliberation, and agency in the context of social relationships, sexual and reproductive health regulations, and the acceptability of pregnancies.