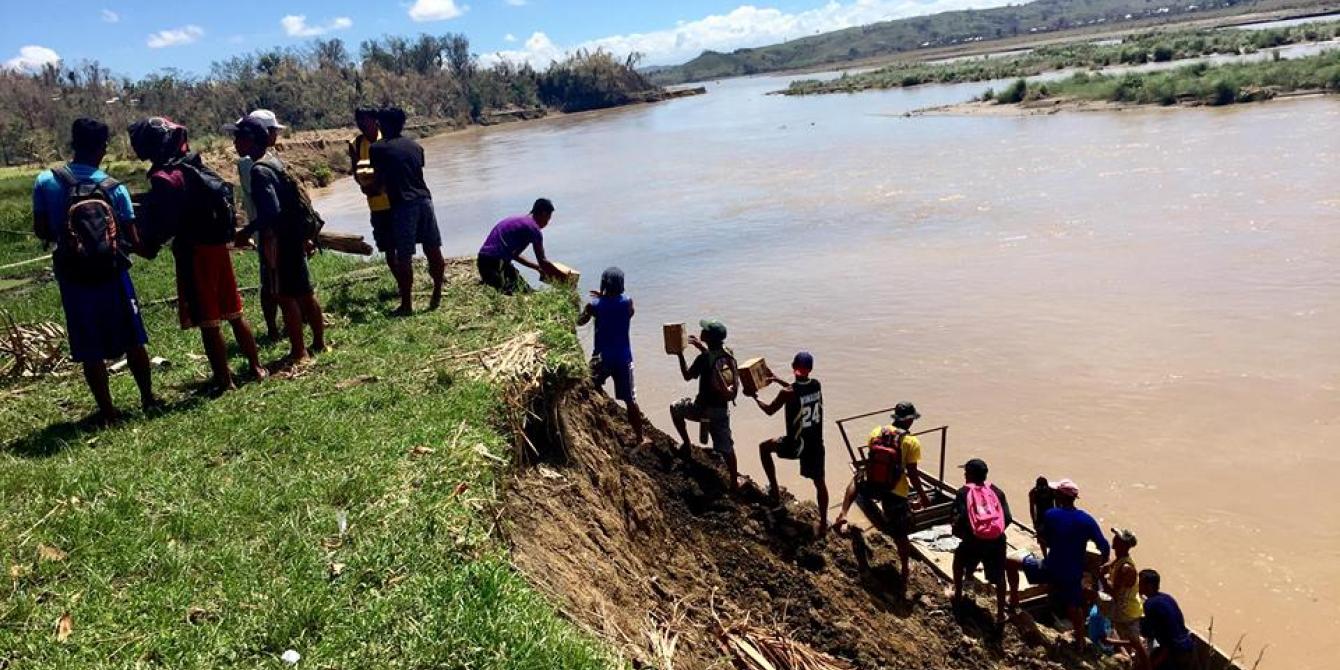 Locals form a human chain to bring the hygiene kits to 250 families in Barangay Lipatan, Santo Niῇo town in Cagayan. This community is identified as one of the 16 geographically isolated and disadvantaged areas (GIDA) in the Santo Niῇo town. Photo by April Abello-Bulanadi/Oxfam

Two weeks after the devastation brought by Typhoon Ompong (Mangkhut) in Northern Luzon, international development agency Oxfam and partners raised the need for continued humanitarian assistance, especially for those in isolated and remote communities in Cagayan province.

Oxfam Philippines Country Director Maria Rosario Felizco said many communities located in geographically isolated and disadvantaged areas (GIDA) in Cagayan have not yet been reached by any support.

GIDA refers to marginalized communities, which are isolated, hard-to-reach, and underserved. These characteristics are made even more acute in times of calamities.

“People in these GIDA communities are still struggling for food and water. Many still have not been able to repair their damaged houses. Their livelihoods are gone, forcing many deeper into debt. Support is badly needed,” Felizco said.

She made the appeal in the wake of another typhoon Paeng (Trami) that may bring light to moderate rains over Northern Luzon, which has barely recovered from the devastation of Typhoon Ompong last week.

Amidst the devastation, Felizco expressed admiration for the ‘bayanihan’ spirit of the affected communities, who helped carry out relief operations, bringing aid supplies, such as water and hygiene kits, to far-flung and isolated communities in Cagayan. Each hygiene kit contained a toothbrush, toothpaste, soap, tubs, pails, and laundry detergent.

‘Bayanihan’ is a Filipino custom characterized by communal unity and cooperation.

“We are always inspired to see communities working together. Time and again, affected communities have shown their strength and will to recover, despite the odds. We owe it to them to help as much as we can,” Felizco said.

CDRC Executive Director Mikhail Valle, who was on the ground, said locals even formed a human chain along the Chico River to bring the aid supplies to higher ground in Barangay Lipatan.

“There is no road access for our vehicles, except by foot and boat. We are thankful that people together with their local officials helped us bring the aid supplies closer to them,” CDRC Executive Director Mikhail Valle said

Barangay Lipatan is classified by the government as one of the 16 GIDA communities in Santo Niῇo town.

Oxfam together with CDRC and CVDRC also brought safe drinking water and conducted hygiene promotion to 500 families from five remote and indigenous communities, which are located across Matalag river in Rizal town, Cagayan.

During the assessment, Oxfam and CDRC identified water as a priority need of the affected communities, whose water sources are unsafe and at risk of contamination.

Valle said the situation in Rizal town is very similar to Santo Niῇo as the only means to reach these remote communities across the river are by foot and then through an improvised cable car called agricultural tramline.

this was made possible by the people’s ‘bayanihan’ spirit. This way, the elderly, pregnant women and persons with disability don’t have to travel far just to receive our humanitarian aid,” Valle added.

Oxfam and its partners, the CDRC and CVDRC, were among the first on the ground to provide humanitarian assistance to those affected by Typhoon Ompong in Cagayan. They specifically targeted isolated and remote communities hit by Typhoon Ompong, which are hardly reached by aid.

· A video clip of the ‘bayanihan’ of the people to bring the water supplies in Rizal town:

· Oxfam supporters around the world can now contribute to the Typhoon Mangkhut Response online: http://oxf.am/mangkhut