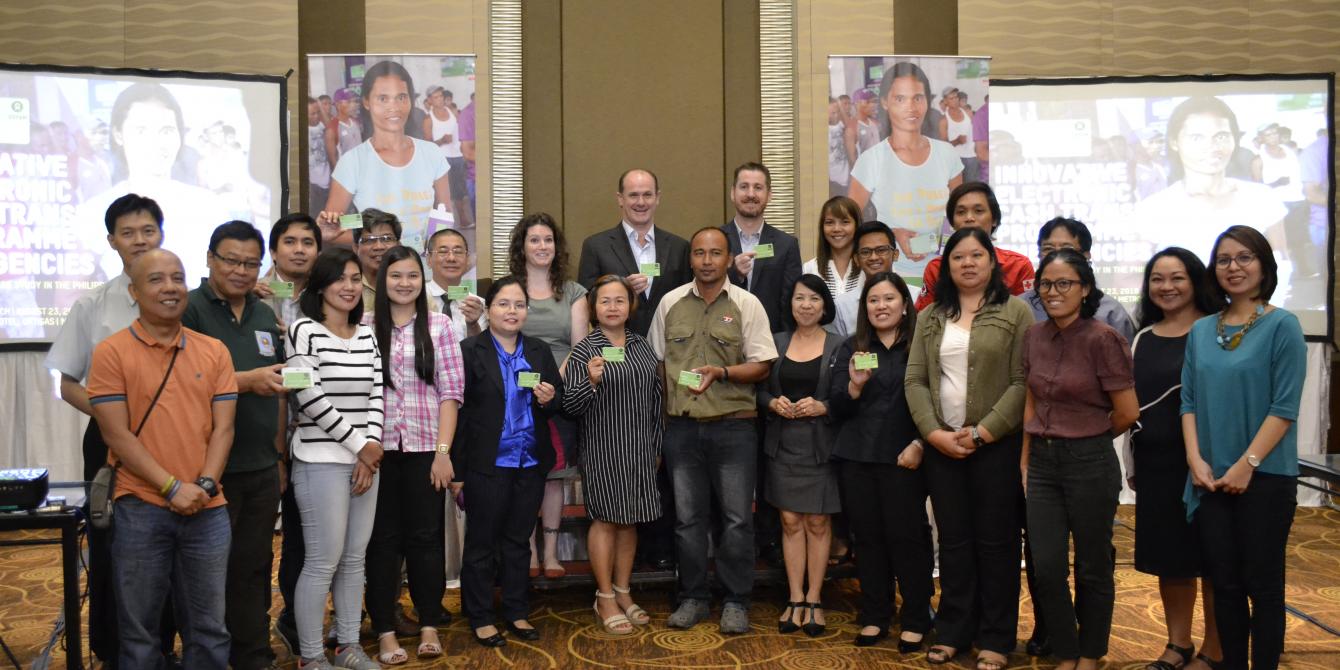 MANILA, 23 August, 2016 – As the monsoon season starts to rip through the country, international humanitarian aid organization Oxfam and global electronic payments leader Visa come together to call for wider financial inclusion that will help improve disaster preparedness and recovery among poor and vulnerable communities.

“The Philippines is the second most disaster-prone country in the world, where the majority of the people reside in disaster-prone areas. Around 8.61 million Filipinos or 10.4% of the total population have been affected by disasters annually since 2006,” said Oxfam Country Director Justin Morgan during the launch of a case study entitled Innovative Electronic Cash Transfer Programme for Emergencies. The case study highlights the successes and learnings from the Electronic Payment Solution (EPS) project implemented by Oxfam and Visa in Tacloban City in Leyte, and in the municipalities of San Sebastian, San Jorge, and Catbalogan City in Western Samar, which were affected by Super Typhoon Yolanda and Typhoon Ruby, respectively.

“While the number of people is estimated to grow as the scale and magnitude of disasters increase, seven out of 10 people are also financially excluded, meaning they don’t have access to formal financial institutions like banks to help them cope and recover from the immediate impacts of a disaster,” said Morgan. “Sixty-eight per cent of Filipinos keep their money at home, and this poses a threat to people’s recovery after disasters, especially when homes and other properties are devastated, “ Morgan added.

Launched in 2015, the Electronic Prepaid Solution (EPS) Project is a simple and efficient platform that supports money transfers during disasters and natural calamities, when speedy access to money is most critical. 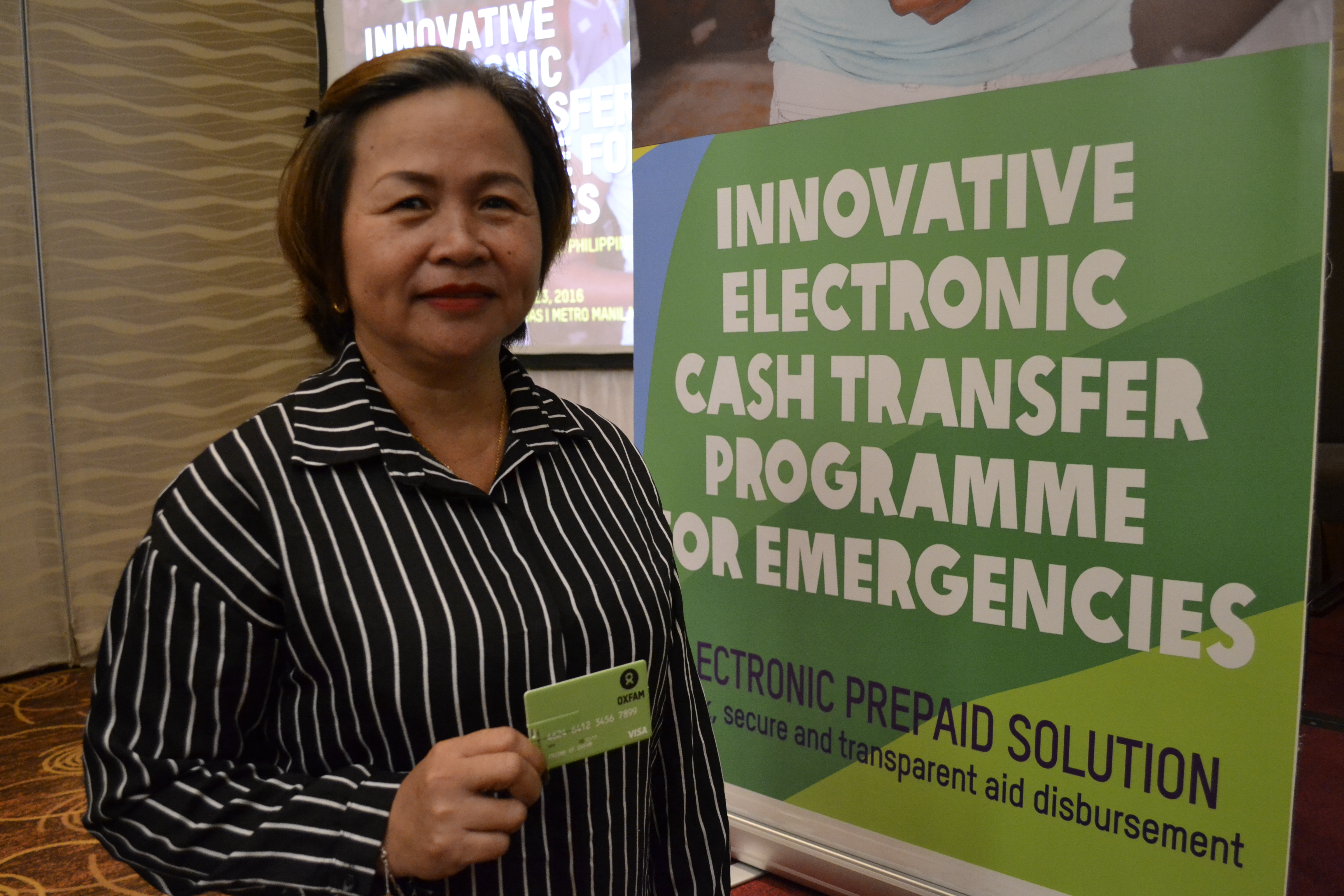 “One year since Visa and Oxfam launched the EPS Project, we have learned that the project has enabled positive changes in the lives of some of the poorest affected communities. As the case study cites, they now feel more empowered, and have used the card to save and manage their own budget. Put simply, financial access has made it easier for people to rebuild their lives,” said Stuart Tomlinson, Visa Country Manager for the Philippines and Guam.

The innovative payment solution in Visa prepaid card format was designed for a wide range of uses such as withdrawal from bank automatic teller machines and partner remittance centers; over-the-counter purchases with local merchants; and purchases through a mobile store set up 20km from the city.

Since the project started, EPS has already reached 10,252 individuals including survivors of typhoons Yolanda and Ruby in Eastern Visayas, as well as conflict-affected communities in the Autonomous Region of Muslim Mindanao (ARMM). In a study conducted by the EPS team in Eastern Visayas and ARMM, beneficiaries cited that the prepaid card was useful to them because they had direct access to the cash assistance, in a safe and secure environment. It was evident from the study that financial inclusion and literacy among poorest communities are important because these build awareness and promote good financial practice among users.

“Currently there are 2.5 billion people around the world with no access to formal financial services. Through the EPS project, we are getting closer to our vision of financial inclusion. Our global development network – nearly 30,000 leaders in business, public office and NGOs – have both a professional and a personal interest in seeing this achieved,” said Tomlinson.

"In 2013, the Philippines ranked as the country most affected by disaster according to the Global Climate Risk Index released this year. Oxfam is always on the lookout for innovate ways of carrying out its work," said Morgan. "For disasters with a scale like Yolanda, the timely and efficient delivery of aid is life-saving and restores the dignity of displaced communities. It is this quest for innovation that has led Oxfam to partner up with Visa. We thank Visa and our other partners, for bringing this innovation to life, an innovation that mitigates the hardships of people affected by disaster, and helps them to move forward.”

About Oxfam
Oxfam is an international confederation of 17 organisations working in 94 countries, as part of a global movement for change, to build a future free from the injustice of poverty.  In the Philippines, we work with poor people to sustain their livelihoods, and reduce their risks to natural and human-made disasters and climate change impacts.

About Visa
Visa Inc. (NYSE: V) is a global payments technology company that connects consumers, businesses, financial institutions, and governments in more than 200 countries and territories to fast, secure and reliable electronic payments. We operate one of the world's most advanced processing networks — VisaNet — that is capable of handling more than 65,000 transaction messages a second, with fraud protection for consumers and assured payment for merchants. Visa is not a bank and does not issue cards, extend credit, or set rates and fees for consumers. Visa's innovations; however, enable its financial institution customers to offer consumers more choices: pay now with debit, pay ahead of time with prepaid or pay later with credit products. For more information, visit www.visa.com.ph, http://visaapnews.asia/ and @VisaNews .