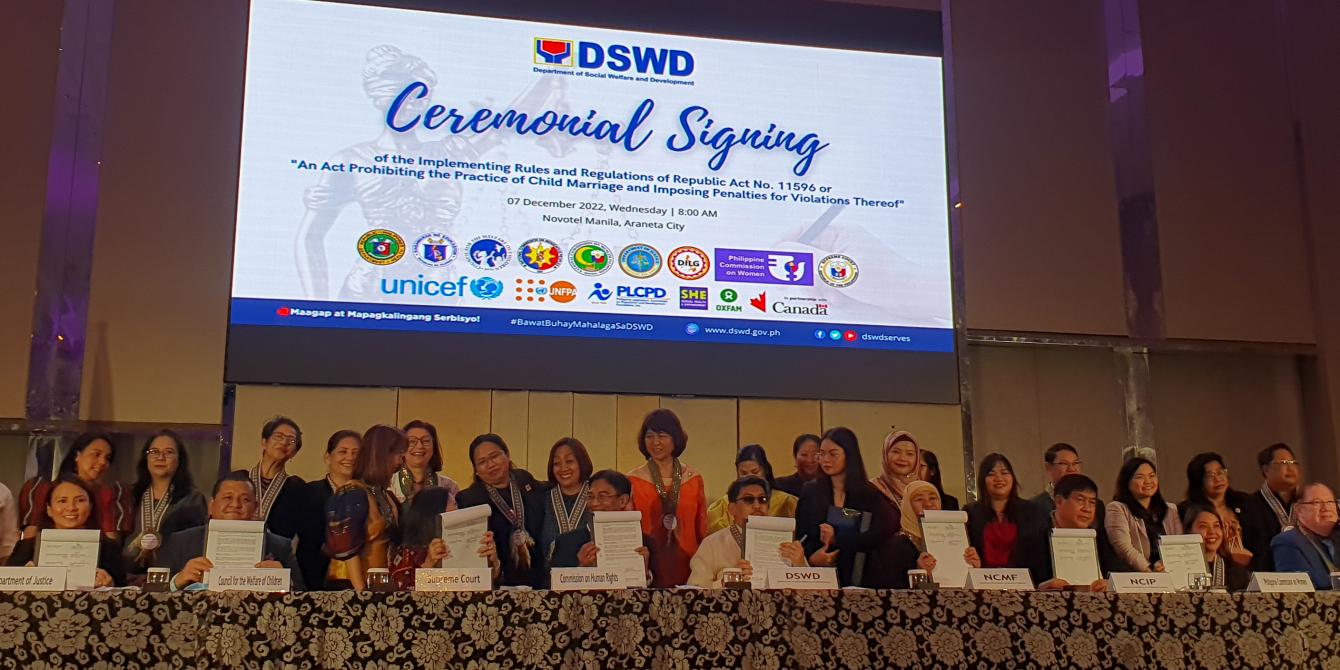 Members of the ‘Girl Defenders’ alliance on Wednesday welcome the signing of the implementing rules and regulations (IRR) of Republic Act (RA) No. 11596, also known as an “An Act Prohibiting the Practice of Child Marriage and Imposing Penalties for Violations Thereof.”

The Philippines Department of Social Welfare and Development and the international humanitarian and development organization, Oxfam Pilipinas, together with other government organizations and civil society groups, participated in the ceremonial signing of the Implementing Rules and Regulations of the Prohibition of Child Marriage Law in Quezon City on Wednesday.

Oxfam Pilipinas Executive Director Erika Geronimo said the signing of the IRR of the Prohibition of Child Marriage Law is a major milestone for the Philippines in its efforts to end Violence Against Women and Girls, and Child, Early and Forced Marriage. 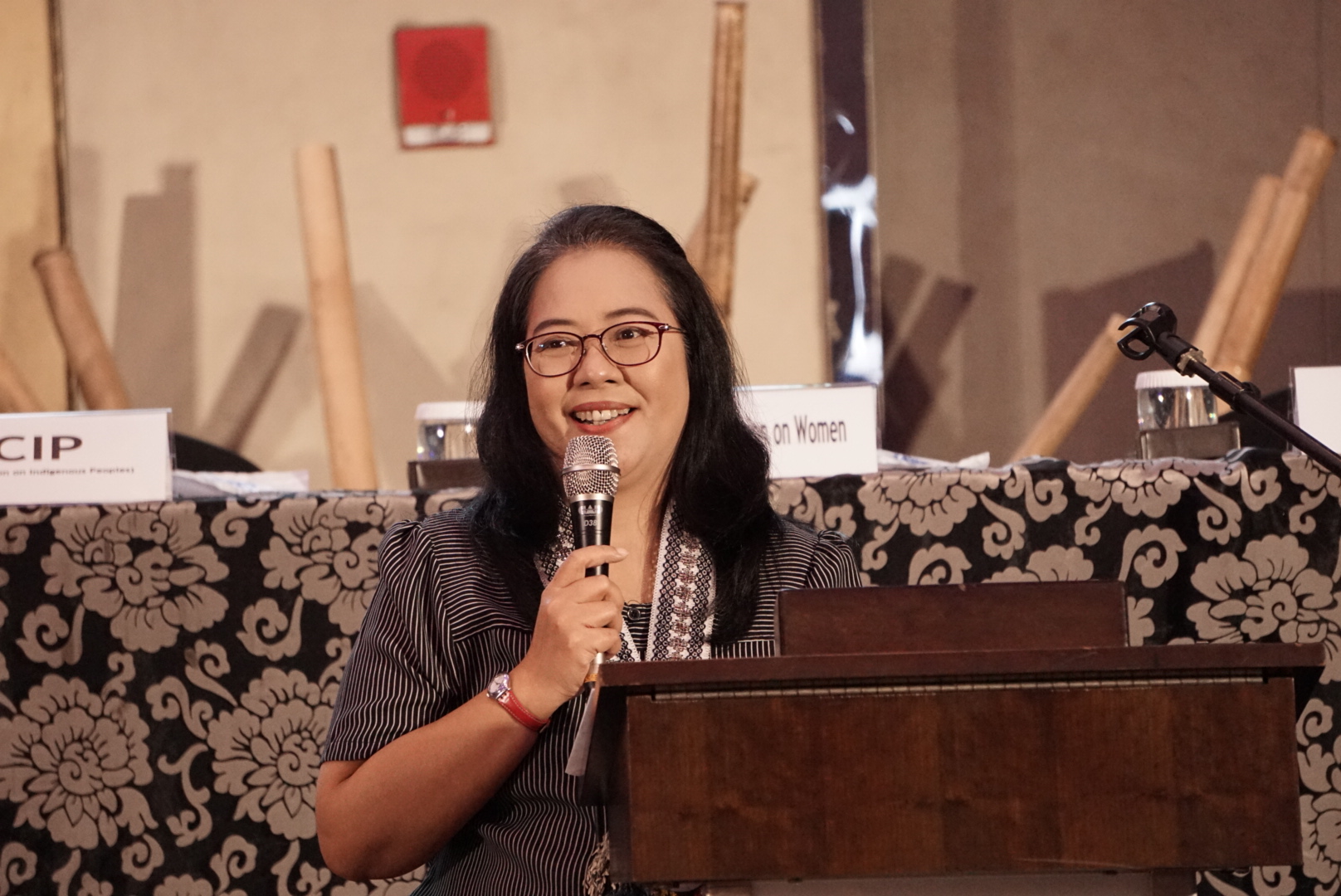 Oxfam Pilipinas Executive Director Erika Geronimo is one of the Keynote Speakers at the Ceremonial Signing of the Implementing Rules and Regulations of Republic Act (RA) No. 11596. (Photo: Geraldine Grace Hoggang/Oxfam Pilipinas)

“We know we should not stop here. We know that we need to continue our efforts to ensure the proper implementation of this IRR – a collective responsibility requiring a coordinated multi-sectoral approach. We are sure that everyone is up to the challenge, to continue brokering new conversations to shift negative norms, until we achieve the world we have envisioned when we started on the mutual journey to end child marriage,” Geronimo said during the ceremonial signing of the IRR.

“We have seen the negative impacts when girls are married at a young age in our communities. Child, early, and forced marriages deprive children of the opportunities to pursue higher education, earn decent income, enjoy their childhood, and make their own choices. With the signing of the IRR, we are optimistic that the practice of child marriage would finally end and give us renewed hope of a better and equal future,” MAYA Chairperson Juanday Esmael exclaimed.

The Philippine Legislators Committee on Population Development (PLCPD), which is also part of the ‘Girl Defenders’ Alliance, said that this is just the beginning of a long battle to protect the rights of women and girls.

“Half of our work is done with the enactment of the law. Now that the IRR is ready for rollout, we have to continue to work together to ensure the full and meaningful implementation of RA 11596,” PLCPD Executive Director Romeo Dongeto said.

Other members of the ‘Girl Defenders’ alliance include lawmakers, youth campaigners, government agencies, women’s rights organizations, and civil society groups, including Al-Mujadilah Women’s Association, Inc. (AMWA), United Youth of the Philippines-Women (UnYPhil-Women), Maguindanao Alliance of Youth Advocates (MAYA), Linding Ko Kalombayan PLCPD, and Oxfam Pilipinas. The Girl Defenders’ Alliance was established thru the Creating Spaces Project of Oxfam Pilipinas and its partners, with support from Global Affairs Canada. Its major accomplishment includes the successful lobbying for the passage of the Prohibition of the Child Marriage Law in the Philippines. 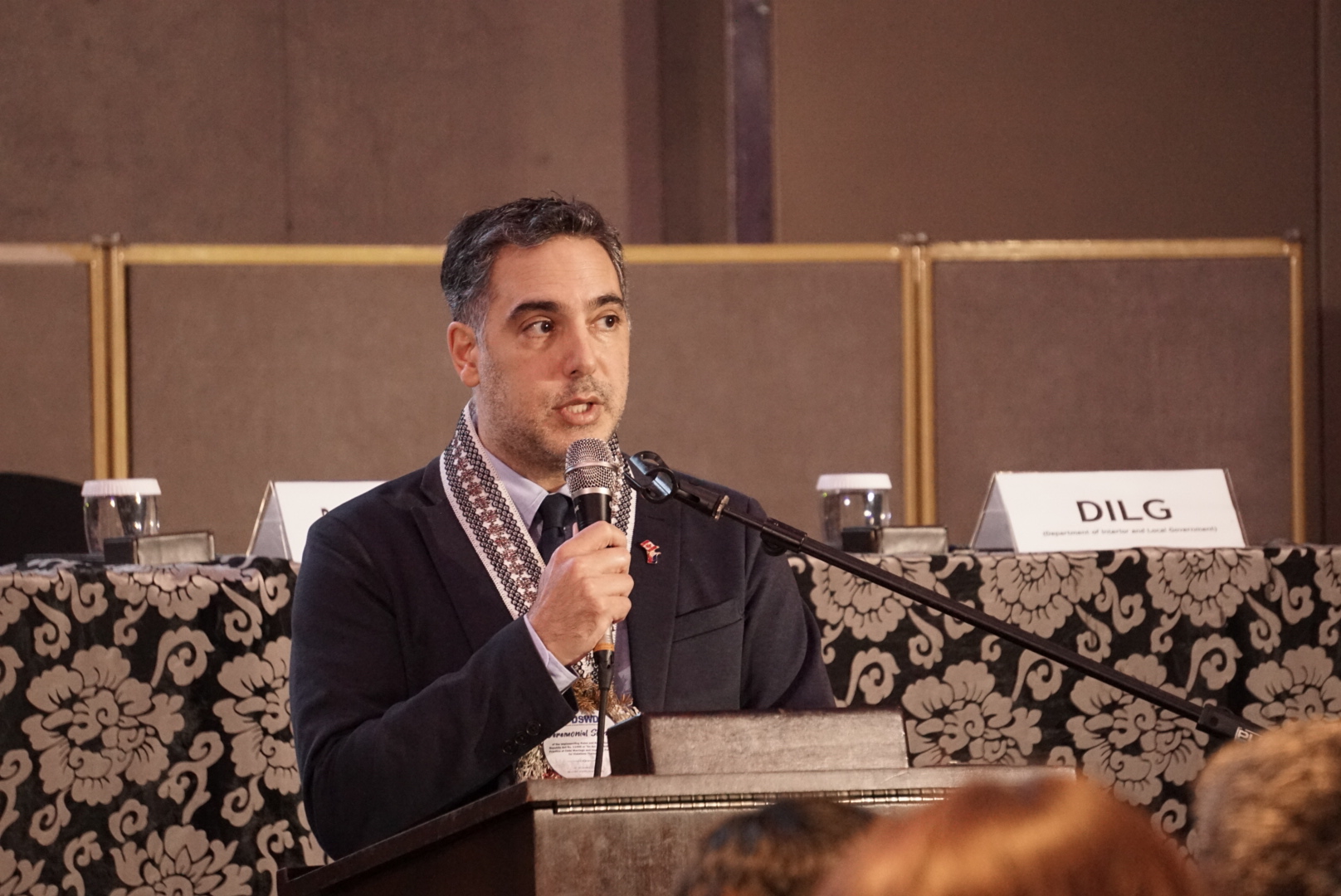 First Secretary for Development Stephane Duval, Embassy of Canada in the Philippines, is one of the Keynote Speakers at the Ceremonial Signing of the Implementing Rules and Regulations of Republic Act (RA) No. 11596. (Photo: Geraldine Grace Hoggang/Oxfam Pilipinas)

The Department of Social Welfare and Development will lead the implementation of the law, including providing programs that address the prevalence of child marriage and playing an active role in awareness campaigns on the negative effects of child marriage. RA No. 11596 was signed into law on December 10, 2021, closing the legal loopholes and challenging practices that enable child, early and forced marriage in the country.

According to the Law, any person who performs or officiates a child marriage will face imprisonment of up to 12 years and a fine of not less than Php 50,000. The law also provides that any person who causes, fixes, facilitates or arranges a child marriage will be imprisoned for up to 12 years. Adult partners who cohabitate with a child, regardless of SOGIE outside wedlock shall suffer the maximum imprisonment penalty. Government officials who solemnize child marriages may also be punished with perpetual disqualification from public office. 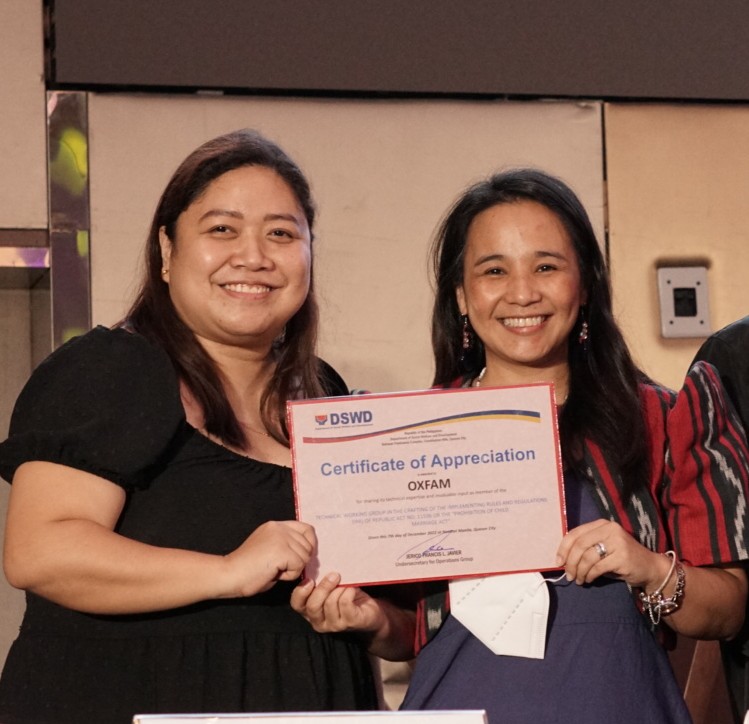 Krizelle Umali, Oxfam Pilipinas Sexual Health and Empowerment Manager, and Jeanette Kindipan-Dulawan, Oxfam Pilipinas Gender Justice Portfolio Manager, receive the Certificate of Appreciation from the Department of Social and Welfare Development given during the Ceremonial Signing of the Implementing Rules and Regulations of Republic Act (RA) No. 11596. (Photo: Geraldine Grace Hoggang/Oxfam Pilipinas)

Oxfam Pilipinas, under its Sexual Health Empowerment Project, together with its local partners, Pambansang Koalisyon ng Kababaihan sa Kanayunan (PKKK) and PLCPD, and with Philippines Government partner, DSWD, led the public consultations with various stakeholders in crafting the IRR. The series of public consultations upholds the spirit of the PCM Law where the government shall guarantee the full and active participation of women, girls, youth and CSOs in every step of decision-making, including the development of the IRR.

Data show that the Philippines ranks 12th among countries with the highest numbers of child marriages. One in six Filipino girls are married before they turn 18.