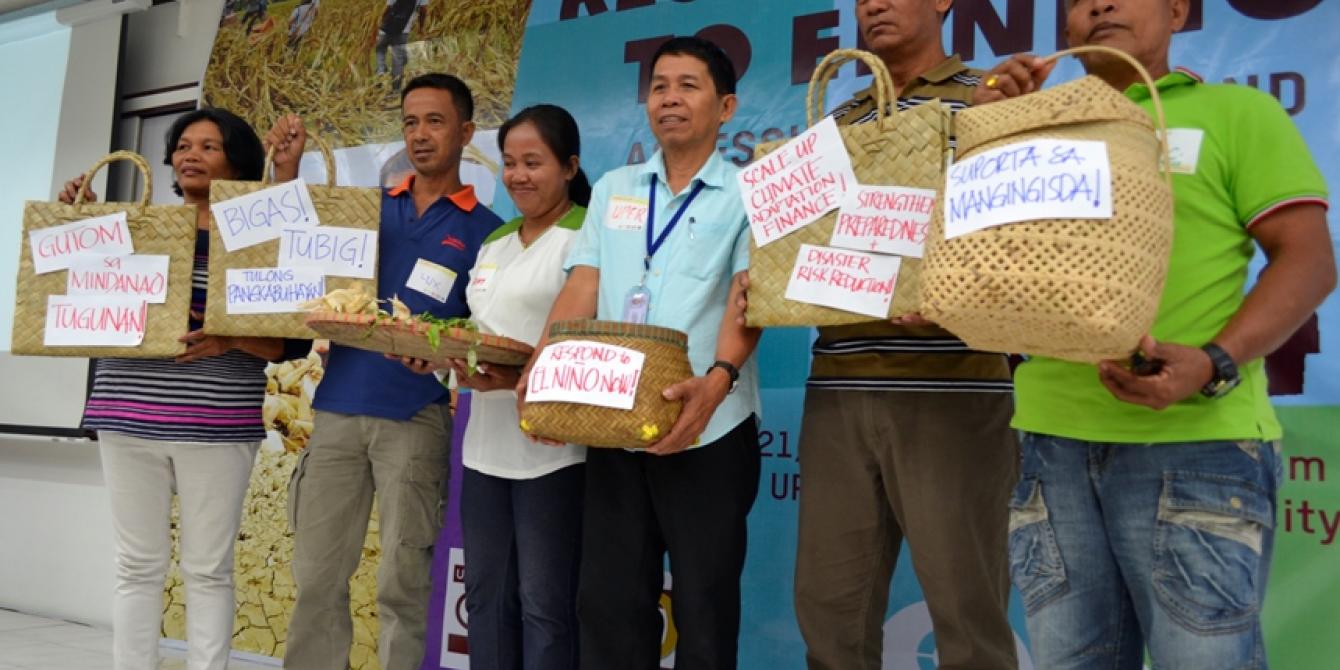 21 April 2016, Quezon City, Philippines –“Ngayon lang kami hihingi ng tulong sa gobyerno. Sanay kaming makuba sa trabajo para mapakain ang pamilya namin. Kaso ngayong El Niño, wala na kaming masaka at nahihirapan na kaming makahanap ng ikakabuhay ng pamilya namin  (It is only now that we are knocking on the doors of government agencies because we are desperate. We are used to working ourselves to the bone just to feed our families. But with the El Niño, there is nothing to toil and we are struggling to find other means just to help our families survive),” said Marceda Sibya, a 36-year-old mother of two who is also a farmer from Pigcawayan, North Cotabato.

Sibya joined other Mindanao farmer and fisherfolk leaders in a forum to call for immediate government action in addressing the needs of El Niño-affected families.

Sibya is just one among the many farmers and their families who are hardest hit by the weather phenomenon. Latest official figures from the National Economic and Development Authority (NEDA) cites nearly 200,000 farmers from across the country are affected by  drought, as  damages to crops — mostly rice, corn and high value crops— reached as high as Php 6.5 billion.  Department of Social Welfare and Development (DSWD), on the other hand, has now placed the number of total affected at 457,497 or almost half a million families.[1]

“In the assessments that we conducted in selected municipalities in North Cotabato, Sultan Kudarat and Maguindanao, farmers and their families are experiencing hunger, without enough food stocks, nor enough cash to buy food. They are being forced to borrow money, or have used loans  intended for production, hence pushing them further into debt and deeper poverty,”  said Jermaine Bayas, DRR and Response Coordinator of international development organization Oxfam. “People will be needing immediate food and emergency livelihood assistance, as we anticipate this situation to last for the next 3-8 months. It will take some time for them to recover lost incomes and livelihoods.”

Data from the World Food Program (WFP) assessments in Lanao del Sur and Maguindanao validate observations that food insecurity has turned from bad to worse, as more than a third of total households surveyed now eat fewer than three meals a day[2].  The assessment also revealed that almost 50% of families are now adapting emergency coping strategies, as they begin to sell farm animals and other assets,  Women are also beginning to forego meals in favour of their husband and children, sacrificing quality and nutrition, and to look for odd jobs outside the community.

The region, together with ARMM, is also home to a large number of households suffering from mild, moderate and severe chronic food insecurity. Extensive damage to rice and corn production in Region XII is feared to further aggravate this situation.

Bayas said the situation is even more volatile in conflict-affected areas in Mindanao like Maguindanao. “These are consistently among the poorest provinces in the country. To make matters worse, there is that threat of conflict always hanging over their heads. The impact of the El Niño has put a strain in their capacity to source out food and to earn a decent living,”  “We are in a complex emergency, and made more complicated by this period of change in national and local leadership,  but this should not stop us from finding ways to better prepare ourselves, and respond when needed, especially to slow-onset emergencies like El Niño.”

“May ibang pamilyang natulungan na at nakatanggap na ng ilang kilong bigas, pero hindi naman ito tatagal. Hindi pa namin alam kung kailan kami pwede uling magsaka. Kailangan namin agad agad ng livelihood assistance, kahit food-for-work pa iyan (Some families from other communities already received food assistance like a couple of kilos of rice, but this will not last. We are not even sure we can start farming. We need livelihood assistance, even if in the form of a food-for-work program as soon as possible),” said Sibya.

“The tragedy of the situation that confronts us today with El Niño is that we have had enough evidence ahead of time to make plans.  In fact, we do have plans, and we do have funds for these, and yet we have failed some of our communities, who have yet to see these plans implemented,” said Dr. Erwin Alampay, director of University of the Philippines Center for Local and Regional Governance (UP-CLRG). “The situation highlights that the framing of ‘tuwid na daan’ should not be framed simply from an anti-corruption and a clean government perspective but rather also of efficiency and effectiveness, where the lack thereof can also lead to outcomes worse than poverty. The urgency requires immediate and more coordinated action from all agencies and levels of government.”

The last leg in a series of El Niño forums across the country, “Responding to El Niño” was held on the eve of Earth Day when world leaders are set to convene in New York to sign the climate agreement forged in Paris last year.

“Climate vulnerable countries like the Phlippines are the ones bearing the worst impacts of extreme weather events such as Haiyan, and now this El Niño.” said Bayas. “As world leaders gather tomorrow in New York City, to officially sign the Paris Agreement, we should continue pushing developed countries to scale up climate finance to help vulnerable countries cope with and respond to the impacts of climate change.”