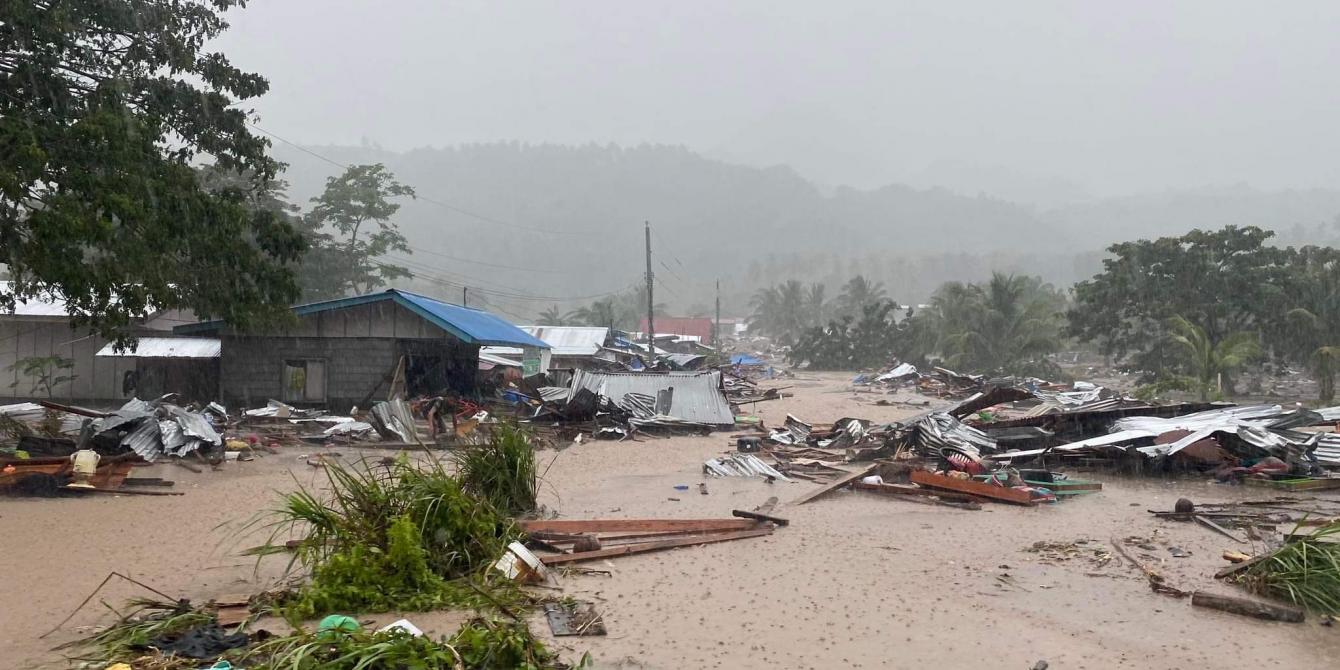 Oxfam Pilipinas on Tuesday called on the global community for better support for countries like the Philippines that are facing the double whammy of being extremely climate-vulnerable while not being prepared enough for the disasters to come.

The call came following the onslaught of Severe Tropical Storm “Paeng” (international name: Nalgae), which affected 2.2 million individuals and displaced half a million of them as of Monday morning. Around a hundred have already been reported dead while more than 60 are still missing. The numbers, including damage to property and agriculture, are expected to go up as the reports come in during the next few days.

It also coincided with the release of the Oxfam report “Climate Finance in Asia: Assessing the state of climate finance in one of the world’s most climate vulnerable regions.”

“’The Philippines, like many other Asian countries, ranks really high in terms of climate vulnerability and really low when it comes to climate readiness, according to our ‘Climate Finance in Asia’ report. Even though we are working on measures to improve our preparedness, every time we are hit by extreme weather events such as ‘Paeng,’ we have to deal with further loss, making it even harder to be ready for the climate crisis,” said Oxfam Pilipinas Country Director Lot Felizco.

According to the report, the Philippines ranked 10th among the 18 Asian countries (excluding Singapore, Korea and Japan) in terms of vulnerability and preparedness to climate change.

The ranking, based on the Notre-Dame Global Adaptation Initiative Index, also shows the Philippines ranking 113 globally out of 182 countries for 2020. This means it is highly vulnerable but is not as prepared as countries like Singapore or Japan, which rank 6th and 19th respectively.

There is much to be done so countries like the Philippines can catch up with others that are fortunately not as highly vulnerable and at the same time better prepared,” said Felizco. “Climate finance and support from players who contribute the most to climate change are important in correcting injustice and saving the lives of millions of people, especially those in the poorest communities and in marginalized groups.”

The Climate Finance in Asia report showed that while Asian countries have seen an annual 28% rise in climate finance to $20.5 billion in 2020, this increase hides problems that are being mirrored across the world and are likely to cause tensions at the UN climate summit in Egypt later this month.

The report is the first to analyze climate finance flows worth $113 billion between 2013-2020 in 18 countries across Asia. It finds:

In December 2021, when SuperTyphoon Rai (Odette) ravaged the Philippines, it killed more than 400 people and resulted in $336 million in losses to agricultural goods, $75 million worth of fishing boats and gear, and $565 million in damage to homes, roads and utility lines (“Footing the Bill,” 2022).

“This is becoming an irreversible humanitarian crisis across Asia where half the population already live below the poverty-line. People are nearing the limits of what they can do to cope,” Acharya said. “They need more help, not debt, and more say in how it happens.”

The report shows that India received the highest total of climate finance between 2013-20 ($37.1 billion), followed by Bangladesh ($14 billion), China ($12.1 billion), and Indonesia ($10.0 billion). However, on a per capita comparison, the Maldives received $59 for every person, compared to India at just $3 per person. China received the lowest “grant equivalent” funding at just 12% - meaning it took on more loans than grants – whilst Afghanistan’s climate finance was given entirely as grants.

“We are forced to look rather cynically at the climate financing of the multinational institutions because the majority of their money is winding up as Asian foreign debt. It’s difficult for Asian countries to maintain health and education budgets when they’re taking on more debt to pay for climate damage that they did little to cause,” Acharya said.

The Oxfam report reveals that some climate finance lenders are counting ‘new’ fossil fuel projects as “climate related development finance”, for example Japan’s $3 billion contribution to Bangladesh to build the giant Mataburi coal-fired energy plant. Notwithstanding countries’ right to develop, the report says, no new fossil fuel project should ever be considered as “climate relevant” to justify these funds.

Asia’s biggest multilateral climate finance providers are the World Bank Group which committed over $30 billion from 2013-20, and the Asian Development Bank ($17.6 billion). However, when factoring in loans, the World Bank Group had a “grant equivalent” spend of just $7.6 billion while the ADB was just $2.1 billion.

The Asian Infrastructure Investment Bank (AIIB) has a “grant equivalent” of zero – meaning its entire $4.1 billion funding came at close to market-rate loans, of which more than 80% went into big transport and energy projects.

The report says that developed countries should increase their adaptation funding to each Asian country by 2025 to align with the Glasgow Climate Pact of doubling adaptation finance overall, and focus on providing grants rather than loans. No funds lent at market rates should be counted as climate finance, it says.

“Asia’s climate finance providers and governments need to reassess climate finance in a way that is genuinely pro-poor, locally-led, and targeted to help women and girls who are shouldering the bulk of climate risk and harm,” Acharya said. "Climate finance must be transparent, easily trackable and spent in ways in which people who are most affected are able to genuinely participate in decision making processes.”

The report also explores the voluntary South-South climate finance flows into Asia, noting that China spent $84 billion into 13 of the 18 Asian countries studied in the same time period. The biggest recipients were Pakistan ($31.4 billion), Indonesia ($10.8 billion), Bangladesh ($10.4 billion) and Philippines ($9.9 billion). The report estimates that more than $35 billion of this went to “climate relevant” mitigation objectives.

“Voluntary South-South climate finance flows from the likes of China and India are very promising and vital if the Asia region is to get the kind of funding it needs to be safer and greener. But the same principles apply – more grants, more targeted at women and girls and local leadership, none to fossil fuels, and more focus on inequality-busting initiatives,” Acharya said.

Link to Climate Finance in Asia: Assessing the state of climate finance in one of the world’s most climate vulnerable regions

Kristine Guerrero in the Philippines | kguerrero@oxfam.org.uk