Action against gender-based violence in PH, other countries affected during the COVID-19 pandemic

A new international Oxfam report shows an increase in gender-based violence (GBV) during the COVID-19 pandemic around the world amid the lack of action of governments.

In the Philippines, a gender snapshot survey conducted by Oxfam Pilipinas and partner organizations among 279 respondents in selected areas in Eastern Visayas, Bicol Region, National Capital Region and the Bangsamoro Autonomous Region in Muslim Mindanao (BARMM) showed decreased access to gender-based violence desks and support services in their communities.

While 9% of the respondents said they had access to these reporting desks before the pandemic and a series of typhoons that hit their communities in 2020, only 3% said they still had access to the gender-based violence desks during and after the typhoons and the COVID-19 lockdowns. Only four respondents said there was no change in the level of access.

There were also 15 mentioned cases of violence against women and children — including rape and sexual harassment — in the surveyed communities.

“We are concerned that there are gender-based violence incidences that are also underreported because of mobility restrictions, and cultural barriers to reporting abuse ,” said Oxfam Pilipinas gender justice advisor Jeanette Kindipan-Dulawan.

“Our survey showed that almost 48% of the respondents are worried about the lack of access and information to reporting desks and support services for gender-based violence while there were some who said they were worried about physical, sexual and emotional violence committed by partners or relatives.

There were also 16 respondents who said they were concerned about child or early marriage, something that is still being practiced by some Filipino communities,” Dulawan said.

She said the national and local governments will need to work harder to ensure the safety and protection of women and girls and non-binary people from violence and abuse in their own homes and communities.

“While we are focusing on protecting the population against the virus, we may be neglecting the most vulnerable members of our society, some of which may face higher risks of gender-based exploitation and abuse,” Dulawan said.

In many households, the pandemic has created a 'perfect storm' of social and personal anxiety, stress, economic pressure, social isolation, including with abusive family members or partners, and rising alcohol and substance use, resulting in increased incidences in domestic abuse.

The Oxfam International report shows that not enough countries have acted with sufficient seriousness to tackle the GBV pandemic. Even before the surge in GBV cases sparked by the pandemic, in 2018 alone, over 245 million women and girls were subjected to sexual or physical violence by an intimate partner – a greater number than the global total of coronavirus cases (199m) between October 2020 and October 2021.

"It is a scandal that millions of women and girls, and LGBTQIA+ people have to live through this double pandemic of violence and COVID-19. GBV has led to injuries, emotional distress, and increasing poverty and suffering, all of which are utterly inexcusable and avoidable. The pandemic has exposed the systematic failure of governments around the world to protect women and girls and LGBTQIA+ people from violence against them – simply because of who they are," said Oxfam International Executive Director Gabriela Bucher.

Women's rights organizations whose mission is to support women and girls and LGBTQIA+ people from violence have been more likely to have been hit by funding cuts, exactly at the time when their work is most needed. In an Oxfam survey published in June this year, over 200 women's rights organizations across 38 countries reported reduced funding and shrinking access to decision-making spaces. Thirty-three percent had to lay off between one to ten staff, while nine percent had to close altogether.

Even though 146 UN member states have formally declared their support for action against GBV in their COVID-19 response and recovery plans, only a handful have followed through. Of the $26.7 trillion that governments and donors mobilized to respond to the pandemic in 2020, just 0.0002% has gone into combating GBV.

“The pandemic has worsened long-standing gender discriminations, and this has increased the vulnerability of women and girls and LGBTQIA+ people to violence and abuse. If governments do not deliberately initiate strong, properly funded strategies to tackle this, the gains made in women’s empowerment in the last 30 years are at risk. We need to avert this, and the time is now," said Bucher.

A few governments, however, have made efforts to respond to the GBV crisis. For instance, Indonesia and New Zealand introduced national protocols and identified GBV service providers as essential workers. South Africa took steps to strengthen GBV reporting channels.

The 16 Days of Activism against Gender-Based Violence that commences today until 10 December 2021 provides an opportunity for governments, donors, and activists to reflect on the emerging issues of inequality that put women and girls at risk and address them urgently. The COVID-19 pandemic has shown that governments can take extraordinary measures to protect their citizens and respond to deadly crises when spurred to action. We need to see more efforts to tackle gender-based violence.

"As the world comes together to mark 30 years of the 16 Days of Activism against Gender-Based Violence, there is an urgent need for a truly gendered approach in every country’s effort to respond to and recover from COVID-19. Governments and donors need to live up to their commitments to promote gender equality by ensuring investment in all the areas we know could help end GBV. Only by doing so can we strive for a future that is more just, safe, and in which people live free from discrimination," said Bucher. ###

The 16 Days of Activism against Gender-Based Violence is an annual international event that runs for 16 days from 25th November, the International Day for the Elimination of violence against women, until 10thDecember, Human Rights Day. This year’s event marks 30 years since its first commemoration in 1991. The event is a platform used by organizations and activists globally to call for the prevention and elimination of violence against women and girls. In the Philippines, the campaign is extended until December 12 to commemorate the International Day Against Trafficking.

The Oxfam International data on calls to domestic/GBV helplines in ten low, middle- and high-income countries during the first wave of the COVID-19 pandemic has been compiled from different UN, national and international NGO reports and government sources. The increase in call volumes is presented as a range between the lowest and highest percentage value among the different countries. 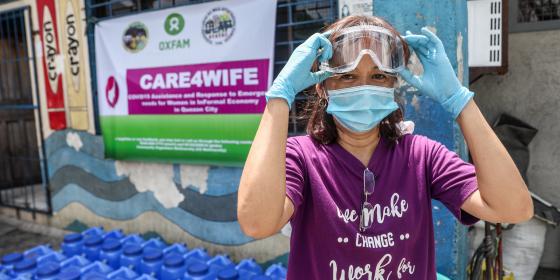 Global and national strategic plans for COVID-19 preparedness and response must be grounded in strong gender analysis and inclusive representations in decision making and implementation measures to create effective, equitable policies and strong COVID-19 key interventions. 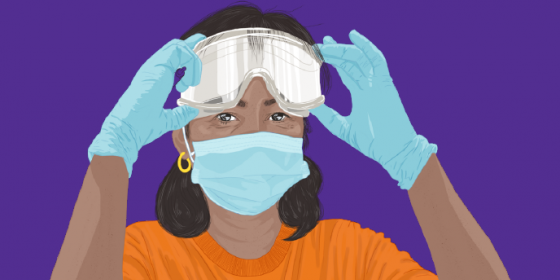 Safety in Solidarity: How Understanding the Gendered Needs of Communities Means Safety for All

In this briefing note, Nastasia L. Tysmans highlights four key insights from the report which ought to urge us even more to integrate practices of solidarity into ongoing efforts to respond to COVID-19.

Despite the COVID-19 pandemic forcing families to spend more time at home, Filipinas are still bearing the brunt of unpaid care work.