The quiet town of Clarin, Misamis Occidental in Northern Mindanao is awakened by a group of women eagerly gathering in a small store.

They would often meet in the morning to talk about the situation of women in their area – from learning sessions on women’s empowerment to discussing reports of domestic abuse. Other times, these women meet to socialize and catch up on each other’s life at home.

Gina Dula, 56, has been a project participant of the Sexual Health and Empowerment (SHE) project for almost four years. Now, Gina, together with 14 other women officers—lead their town’s project’s gender-based violence- sexual and reproductive health (GBV-SRH) watch group. 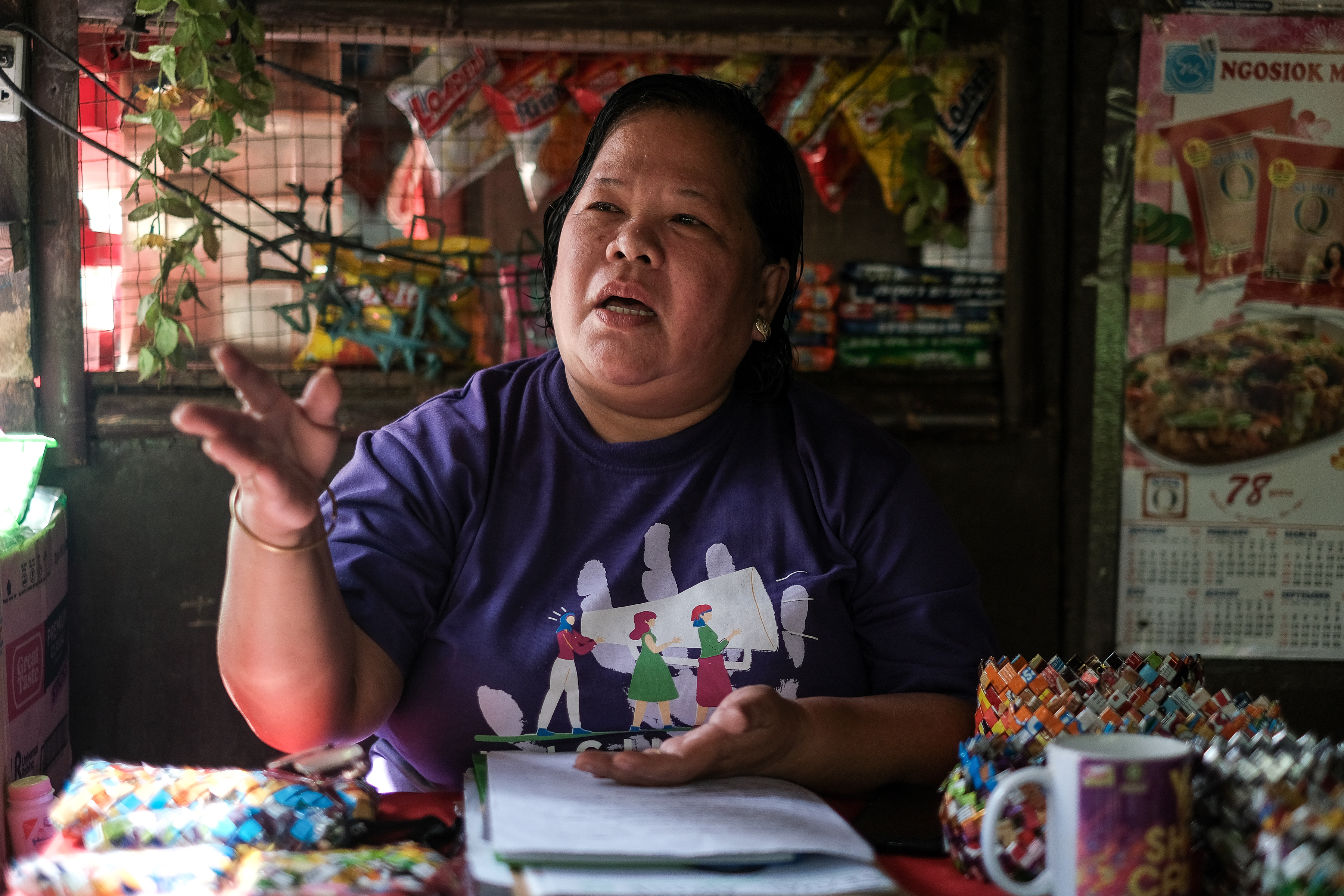 Gina Dula, 53, president of the Gender-Based Violence Watch Group (GBV WG) in Clarin town’s Pan-ay village in the southern Philippine province of Misamis Occidental. Composed of volunteer women, the group in partnership with the National Rural Women Coalition (Pambansang Koalisyon ng Kababaihan sa Kanayunan or PKKK), and through the Sexual Health and Empowerment (SHE) advocacy, is committed to raising awareness of the harm of GBV, preventing it from occurring, and supporting GBV victims. (Photo: Roy Lagarde / Oxfam Pilipinas)

Gina broke out of her insecurities and hesitations when the SHE project began in Clarin. “I used to belittle myself. I was so insecure, so I just stayed quiet on the sidelines,” she said.

The SHE project seeks to empower women and girls to secure their sexual and reproductive health and rights (SRHR) in six disadvantaged and conflict-affected regions of the Philippines.

“I was motivated to attend because every time I join their orientations, I always get to bring home a lesson or two. My perspective towards other women changed. I used to be judgmental, but I am now more sensitive and understanding because of the SHE advocacy,” she said.

“Leading and being of service to women boosted my confidence. I gained a sense of purpose,” she added.

When she was elected as the President of the GBV-SRH watch group in March 2022, Gina began keeping a logbook containing the complaints she received from the community.

The logbook remained empty at the beginning. While stories of abuse were spread around the community, no reports were made. 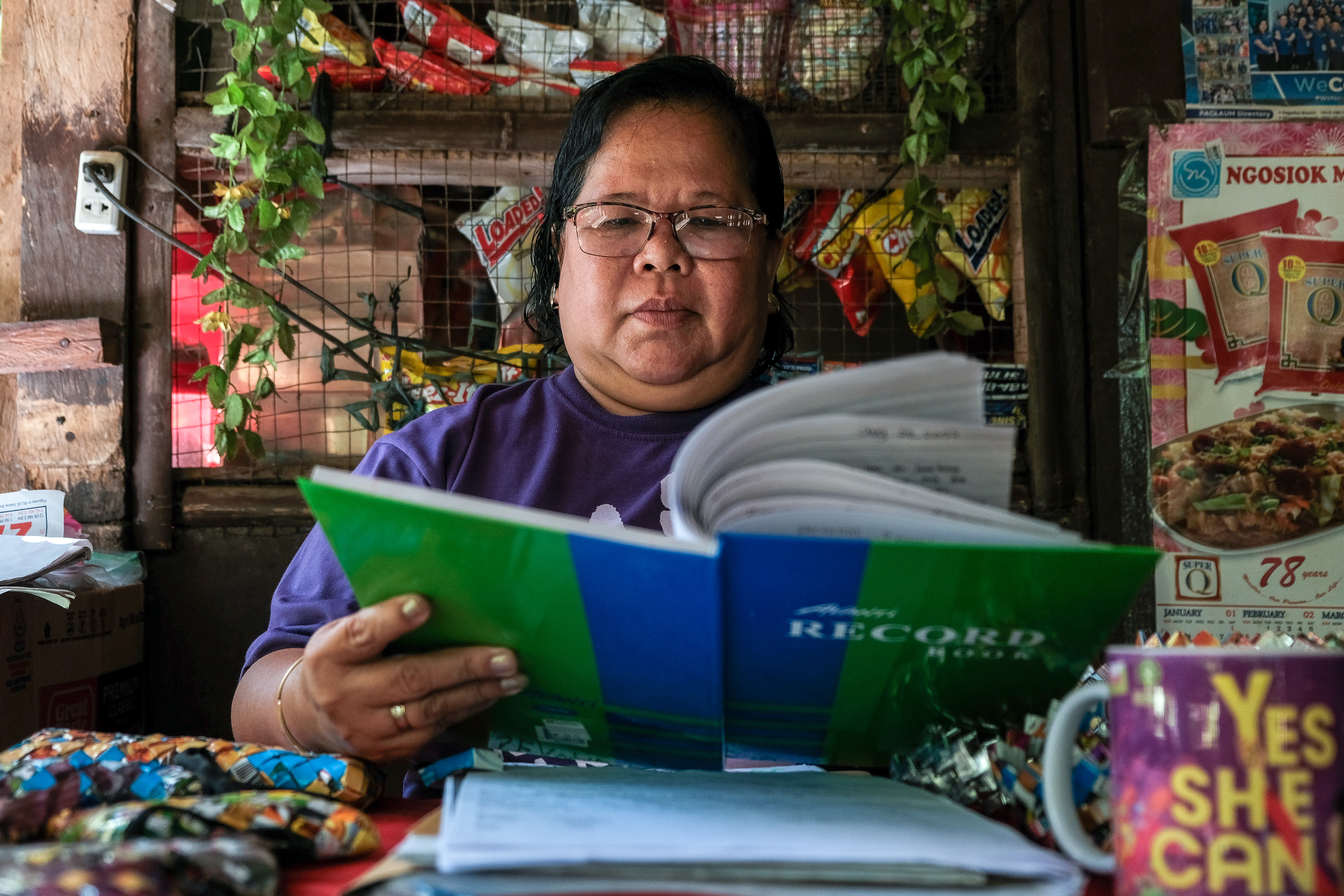 Gina Dula, 53, president of the Gender-Based Violence Watch Group (GBV WG) in Clarin town’s Pan-ay village in the southern Philippine province of Misamis Occidental, checks her record of GBV cases in their community, Nov. 14, 2022. She said GBV incidents in their community have dwindled significantly over the years since the Sexual Health and Empowerment (SHE) advocacy was introduced in their area in 2018. (Photo: Roy Lagarde / Oxfam Pilipinas)

“We’ve heard of stories of fights and violence around, but no one dared to complain,” Gina said.

It was after the watch group’s first women’s empowerment orientation in July when things began to change. In August alone, Gina received three reports seeking her help.

After the rollout of orientations for women, more community members found out that they can rely on the town’s GBV-SRH watch group to assist GBV victim-survivors in reporting, documenting and guiding them on the relevant steps to undertake without being judged.

Since the implementation of the SHE project, the watch group has received several complaints raised by women. Most reports include domestic abuse and deprivation of financial support when women refused sexual intimacy with their husbands.

“Before the SHE project, there were endless problems none of us knew how to properly fix. Now, we and the women in our community know what we can do to change the situation,” she said.

“I am happy I am in a position to help them, and this keeps me going,” she added.

The SHE project caters to girls and women of all ages.

“In terms of experience, we have been through a lot already. So being in the program was refreshing. I wish it happened sooner,” said Marilyn Aguhol, 45.

Marilyn was a teenager when she got married. She moved from her hometown Bukidnon, a 5-hour bus ride from Misamis Occidental, to start her own family.

“I was just 15 then, I only reached the sixth grade, I didn’t know life was going to be that hard,” she said.

She endured countless physical abuse during her three decades of marriage with her husband. The worst of it all, she recalled, was when her husband went home drunk one Christmas and pointed a knife at her in the middle of a heated argument.

“Things are bad every time he’s drunk,” she said. She attempted to leave him thrice, only to keep coming back as she couldn’t bear raising five children on her own.

Motherhood was hard, said Marilyn. “I found myself many times walking out of the house with mismatched slippers, holding a baby in my arm, while holding the hand of another.”

At 27, a month after she gave birth to her second child, she tried an intrauterine device (IUD) as a family planning method since she saw this was offered at the health center she frequents.

“My husband didn’t know about it. When he left to work in the farm, I immediately left to get an IUD,” she said.

When her husband later found out about Marilyn’s IUD, they got into a big fight.

When Marilyn felt the IUD moving out of place, she tried Depo Provera injectable instead. However, she was not able to get the injectable consistently.

That was until she got involved in the SHE project. At 45, Marilyn just had her second Implanon, a contraceptive implant made of a plastic rod inserted on the woman’s arm that hinders ovulation for good three years. 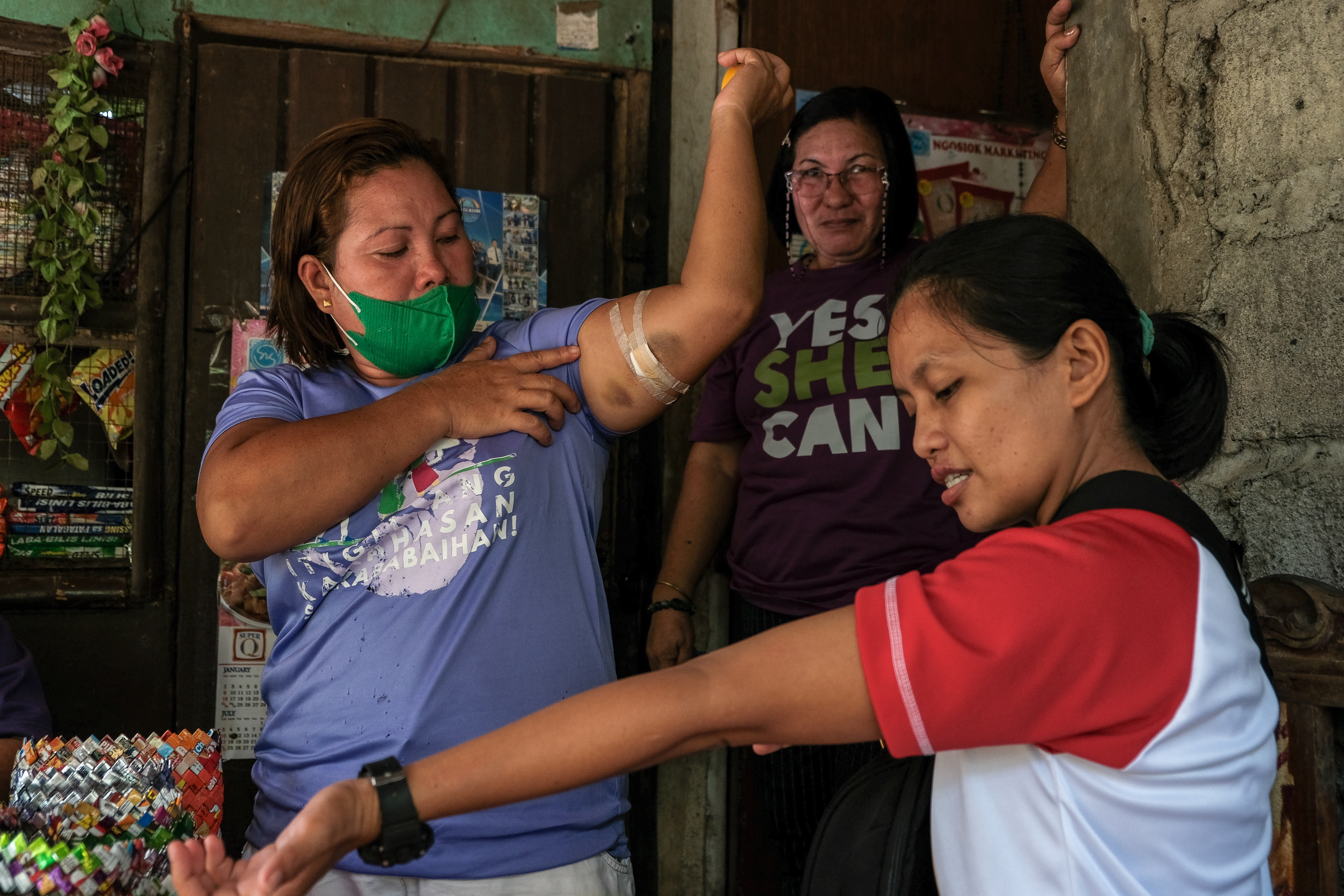 “Women should be very careful. I always tell my husband it is the woman that’s always left with the kids, and it is no easy job, while men can leave the house any time they want,” she said.

“He now listens to me,” she added. “Since I joined the SHE orientation, I warned him that if he tries to hurt me, I can send him to jail.”

“Now, we can talk peacefully. Whenever he comes home drunk, he goes straight to bed,” Marilyn said, letting out a shy victorious smile.

When women are empowered, they begin making their own firm decisions, observed Imelda Pitos, 56.

“I met a 70-year-old woman in the town of Sebasi., She was abused and objectified by her late husband. While the SHE project happened after experiencing this situation, she’s very active with our orientation,” she shared.

“You know what she said? It might be too late for her, but it’s not too late for her children and grandchildren. She wanted to learn and help to ensure that the younger ones didn’t have to go through what she’s been through.”