For someone who is barely five feet, 17-year-old “Nana” walks tall and proud among volunteers in the small rural town of Ganassi in Lanao del Sur.

With a smile as bright as sunshine, Nana recalled how at 14, she was among Grade 8 students selected to be part of an advocacy training facilitated by the Sexual Health and Empowerment (SHE) Project.  Little did she know that the advocacy training would be followed by yet another and so many more that would help change how Nana and her community view child, early and forced marriages and eventually making a difference for the young people of Ganassi. 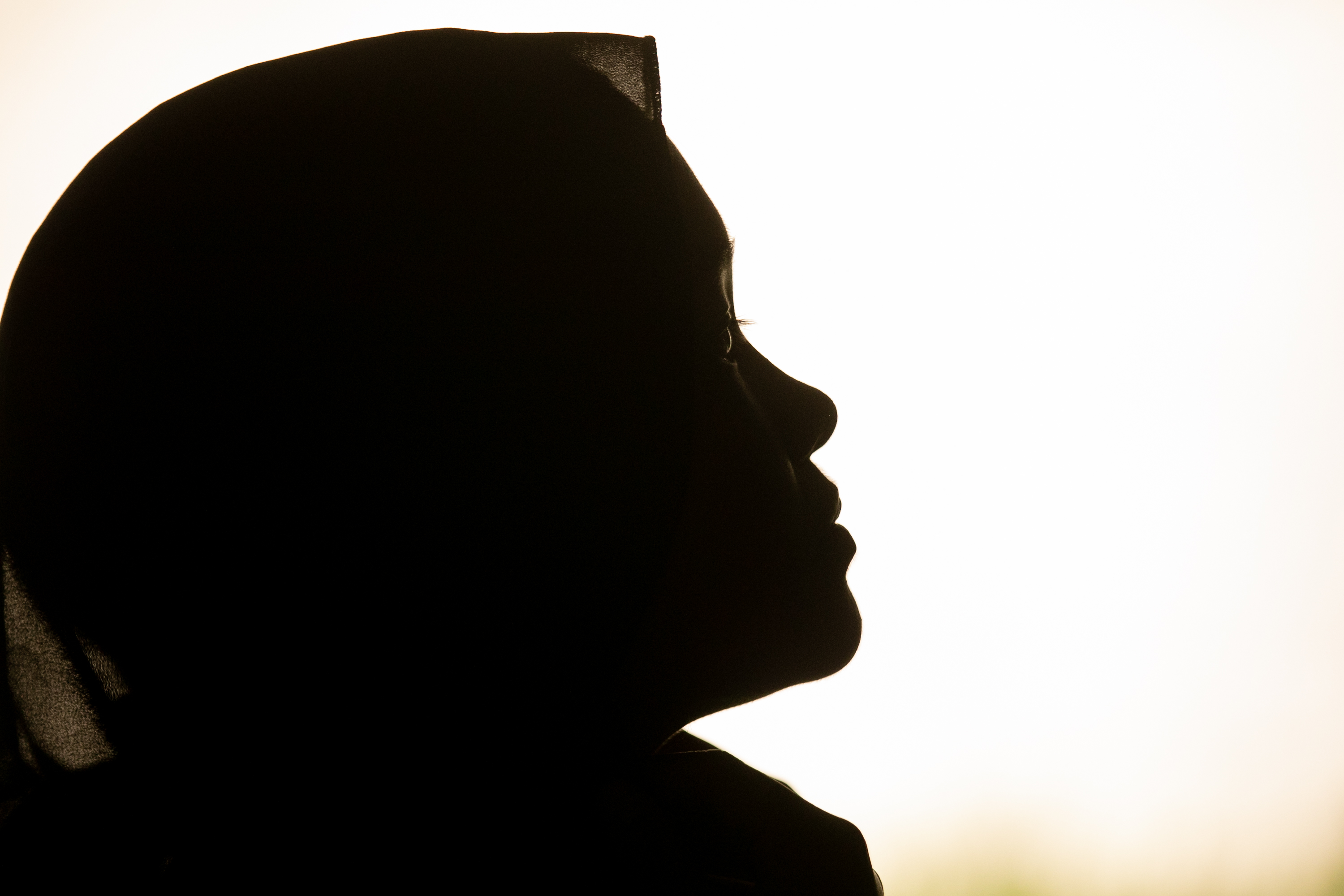 Nana, a peer educator of the Sexual Health and Empowerment (SHE) Project, works with other Bangsamoro youth to influence their peers in the community and raise awareness about adolescent reproductive health and the prevention of child, early, and forced marriage. (Photo: Basilio Sepe / Oxfam Pilipinas)

The SHE Project, supported by Global Affairs Canada, is implemented by Oxfam Pilipinas in partnership with local organizations. The SHE project seeks to empower women and girls to secure their sexual and reproductive health and rights (SRHR) in six disadvantaged and conflict-affected regions of the Philippines. The SHE Project aims to improve knowledge and awareness of SRHR and prevention of gender-based violence (GBV) particularly among women and girls; strengthen health systems and community structures to deliver rights-based comprehensive SRH information and services; and, improve the effectiveness and capacity of women’s rights organizations and women’s movements to advance SRHR and prevent GBV.

In Ganassi, the project is implemented by Oxfam Pilipinas and Al Mujaadila Women's Association Inc. (AMWA) in collaboration with the Advocates for Ganassi Multisectoral Association (AGAMA).

Speaking up, finding her voice

At a young age, Nana facilitated “Peer Education” and “Parent Conversations” for the SHE Project. According to Nana, these activities helped Ganassi residents change their views on how young people should be treated and how children’s voices should be respected especially against early and forced marriages.

In many Muslim communities in the provinces of Maguindanao and Lanao del Sur, child, early and forced marriages are considered common. The Bangsamoro Women’s Council estimates that in the region alone, there are approximately 88,600 child brides, mostly belonging to poor and underprivileged families.

According to Nana, peer education activities give her an opportunity to share knowledge she gained from SHE seminars on reproductive health, including lessons about basic self-care and hygiene during menstruation. “Traditionally, menstruation was seen as just a sign that a girl was ready for marriage. This is wrong,” she said, adding that girls are far from ready for motherhood and other adult responsibilities. 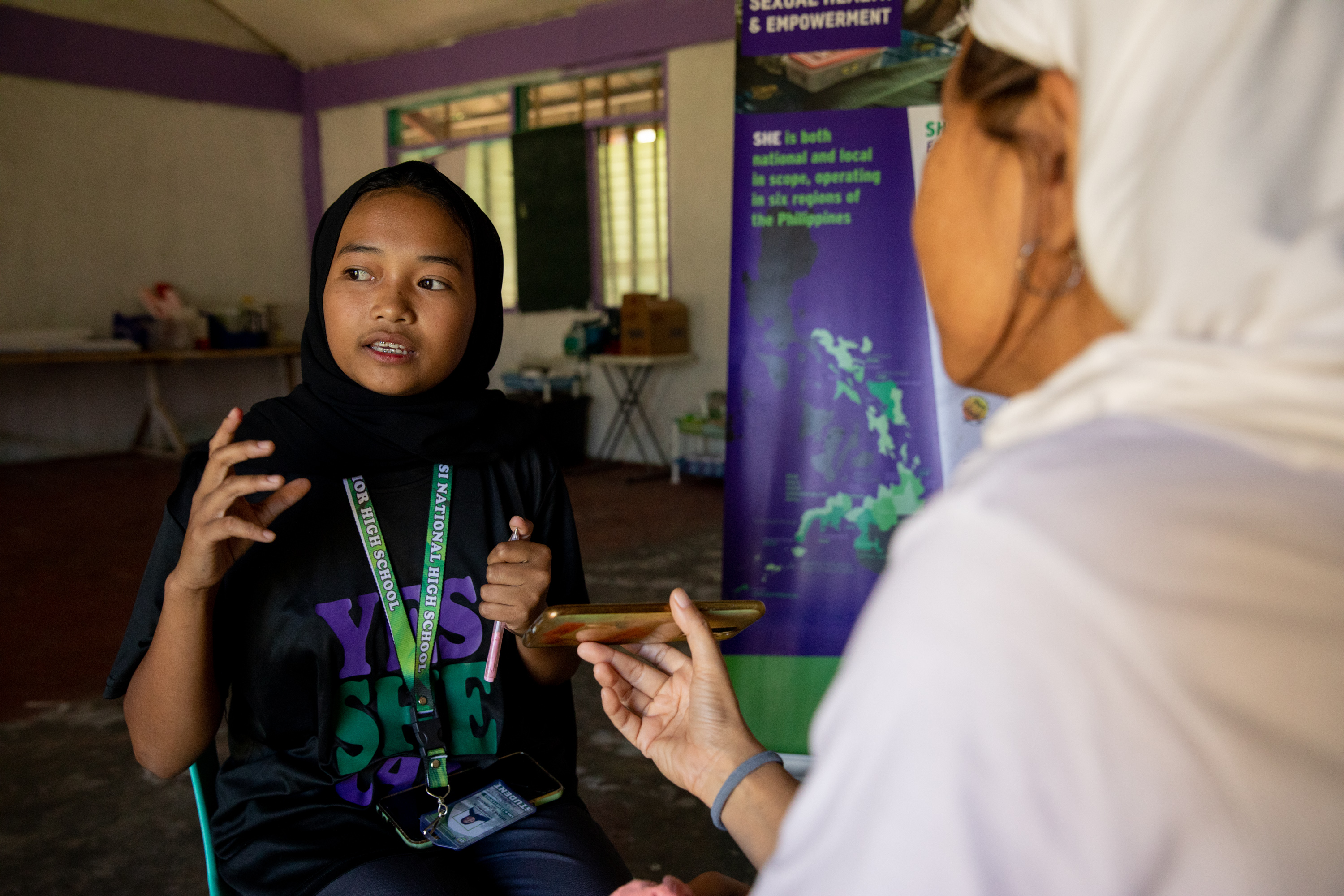 Nana, 17, is interviewed about her work as peer educator of the Sexual Health and Empowerment (SHE) Project while inside a classroom in Lanao del Sur, southern Philippines. (Photo: Basilio Sepe / Oxfam Pilipinas)

She explained further that the peer education activities allowed her to discuss important issues such as women and child rights with young people her age. “We easily understand each other. It is different when you are speaking with your peers. Girls and boys my age find it easier to open up to their peers rather than with older people or with our parents. We were brought up knowing that what our parents say is the law. Children cannot speak up or go against the wishes of our parents.”

Nana proudly recalled how even as she was just starting as a SHE volunteer, she was able to prevent a classmate from getting married.

“I was 14 years old. We were in eighth grade and three of my classmates were about to get married. We were so young!” It was also around that time when Nana had her first training with the SHE Project team and Nana felt compelled to do something about the situation.

“One of them, a 15-year-old girl, was being arranged to be married to a 17-year-old boy. I spoke with both of them and gave them advice. I told them it will be difficult to raise a family if you cannot get good jobs and how their children will eventually suffer. I encouraged them to speak up to their parents and explain how they both had dreams and that they could achieve more if only they will be allowed to finish their studies and not get married right away,” Nana said. 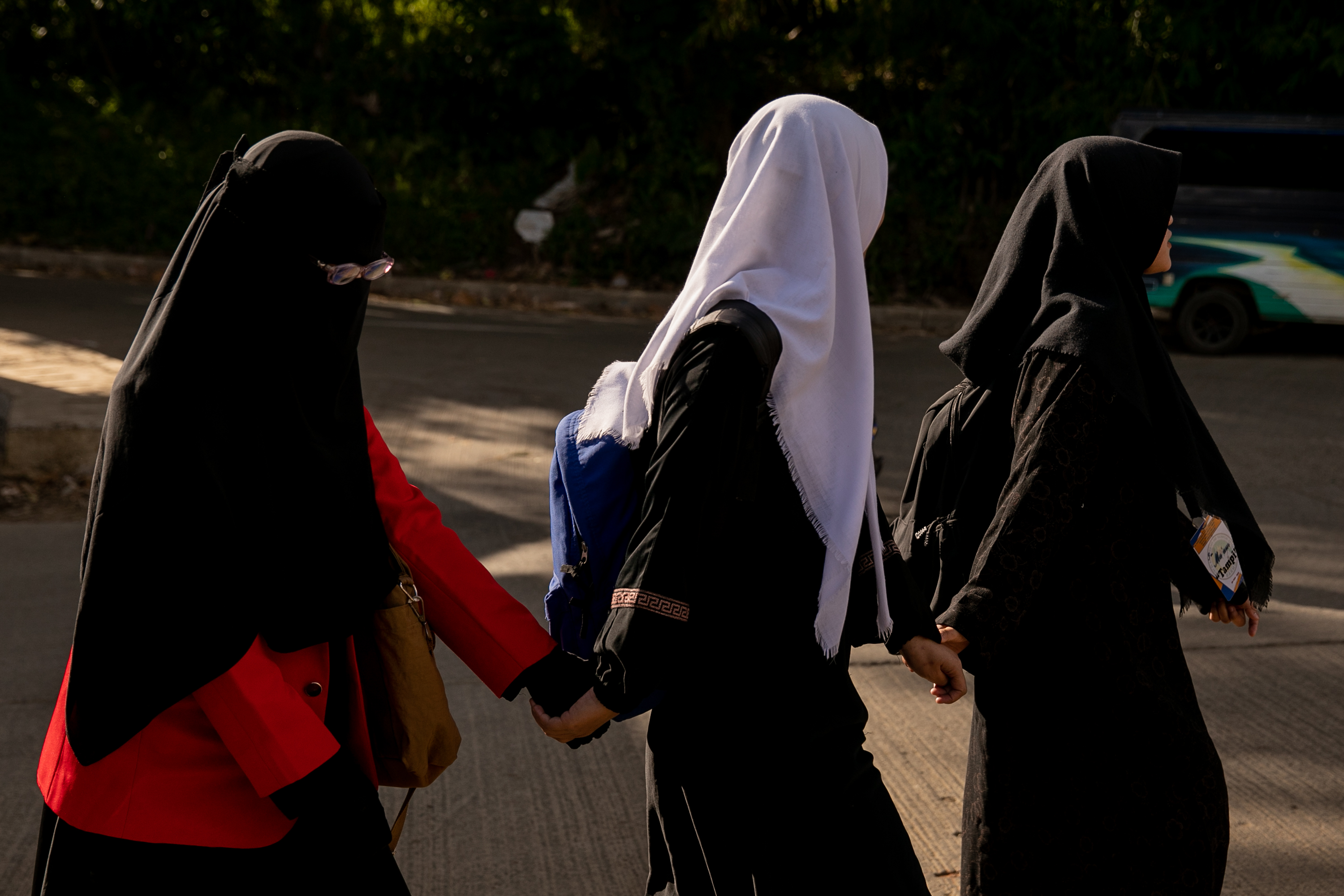 “I was also surprised that even though I was only 14 at that time, I mustered the courage to approach their parents. I explained to their parents why they should be given the chance to finish their studies. I even became close to their mothers in the long run. Up until now, she is still my classmate and they are still in school,” Nana beamed.

Nana carefully explained how in her own family, she witnessed her sister’s difficulties with parenting and her vulnerability to violence. Like her sister, those who also marry early cannot adequately feed or support their children, she said. She said her sister fights often with her husband and they both do not have the capacity to guide their children. “Their experience is the story of many families in Ganassi,” Nana pointed out.

Nana has also found her voice battling misinformation in the chaotic world of social media. When the COVID 19 pandemic broke and school was disrupted, she found herself engaging in debates online and commenting on posts that say: “Wala nang mag-aaral; Mag-asawa na lang (Let us all stop going to school and just get married)!”

She said she immediately confronted her friend who shared the Facebook post and explained that even though it was intended to be a joke, it did not help young people like her.

“I am braver now. I am not afraid to speak my mind and share my thoughts whether in social media or with parents or with my peers,” Nana said.

Admittedly, changing the community’s views on early marriage is difficult. Nana and SHE volunteers in Ganassi welcomed the recent passage of the Prohibition of Child Marriage Law (Republic Act No. 11596). However, since parents will now be penalized for arranging the marriage of their children who are minors – a custom that some families continue to believe in -- there is apprehension among some community members.

But more than just having to face the implementation of the law, parents and their children need to understand that pregnancies for young girls is considered high risk and that the vulnerability of girls to violence once the reality of marriage and parental responsibility sets in is extremely high.

“Nakagawian kasi ito. It is tradition,” said Nana, explaining that the practice is deeply rooted in the Meranao culture and in the collective experience of poverty. Members of the community explained that by marrying off their daughters at a young age, the parents are “unburdened” since they would no longer need to send their children to school as they would now be the responsibility of the husband. Women are also expected to marry early and have more children so they can have big families, which is important in agriculture and amid the threat of clan wars. Nana said it is difficult to change traditions that they have all been used to for generations.

Nana confessed that while there may be times when she is daunted by the challenges they are facing, she is hopeful for the future. She draws inspiration from her peers and is continuously bolstered by the work that the SHE Project has done for their communities.

“I feel that I have learned so much. If not for SHE I would not have learned that I was capable of so many things, that I can be a good example to my peers or that I can help girls like me open up to and create good relationships with their parents,” Nana beamed.

How long does Nana intend to be part of the advocacy that SHE represents? For as long as she can. “Hanggang may SHE. Habang buhay (Until the SHE Project exists. For a lifetime).” 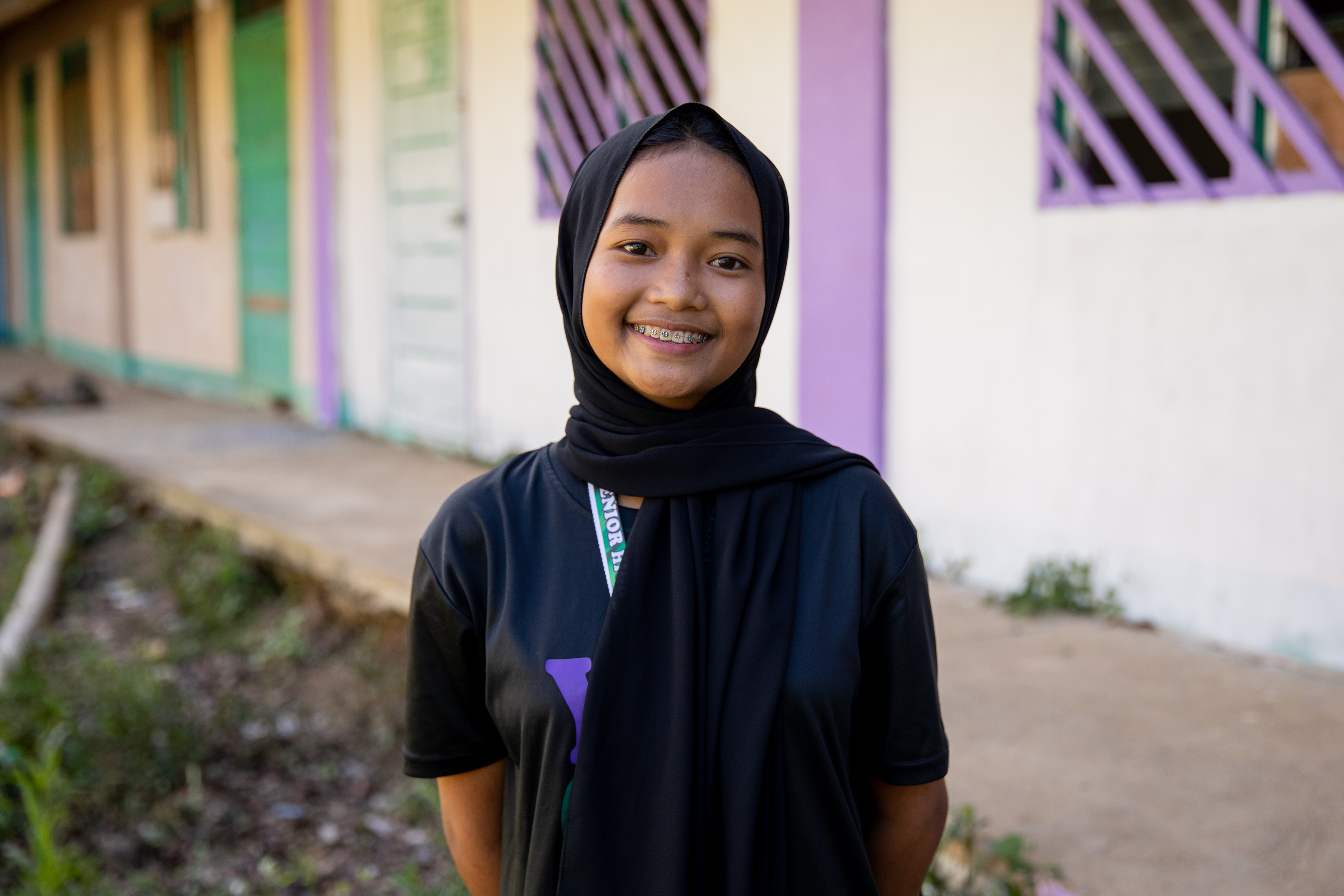 Nana, 17, poses for a picture outside a classroom in the town of Ganassi, Lanao del Sur, southern Philippines. Nana is a peer educator who uses her voice to influence young people and schoolmates and raising awareness about adolescent reproductive health and the prevention of child, early, and forced marriage. (Photo: Basilio Sepe / Oxfam Pilipinas)