When her husband is out at sea during the day, 25-year-old Angelica Legria’s daily routine includes doing the laundry, ensuring that there is food on the table, maintaining cleanliness in and out of the house, and teaching her two children basic literacy.

On top of her care work, she also helps prepare and dry the fishes that her husband caught the previous day. 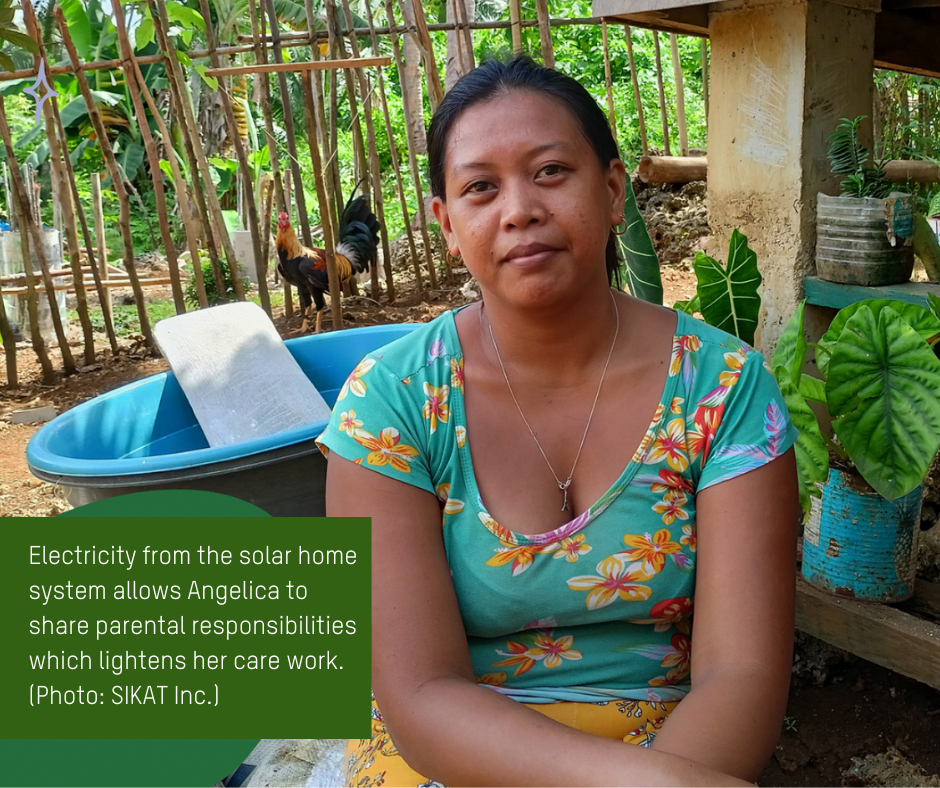 Before, she had to accomplish all these before the evening came; otherwise, it would be much more difficult to work at night when they had no light in their home on the off-grid island of Hilabaan in Dolores town, Eastern Samar.

But today, Angelica’s days stay brighter for longer. This meant more time to rest in between tasks.

“I now have time to do all these care work duties because all the other little tasks I can do at night instead,” she said.

For the past three months, Angelica’s household has been using a solar-powered home system provided by Oxfam Pilipinas and its local partner organization Sentro para sa Ikauunlad ng Katutubong Agham at Teknolohiya, Inc. (SIKAT) through the Just Energy Transition project implemented in the islands of Hilabaan and Tikling in Dolores, Eastern Samar.

The solar-powered home system allows them to light six bulbs, and charge their radio speaker and mobile phones.

“I am closely monitoring our solar home system to ensure that it is not abused, the battery is not drained, and the system is properly maintained. We want this to last long,” she said.

She said that as a household policy, all devices are charged only during the day so that starting at six o’clock in the evening until dawn, the stored energy is all for lighting.

“This is a very big help to our family. It eased my burden in running the household,” she said. “It is better if you can do some chores during the night so that you have fewer things to do during the day,” Angelica said. 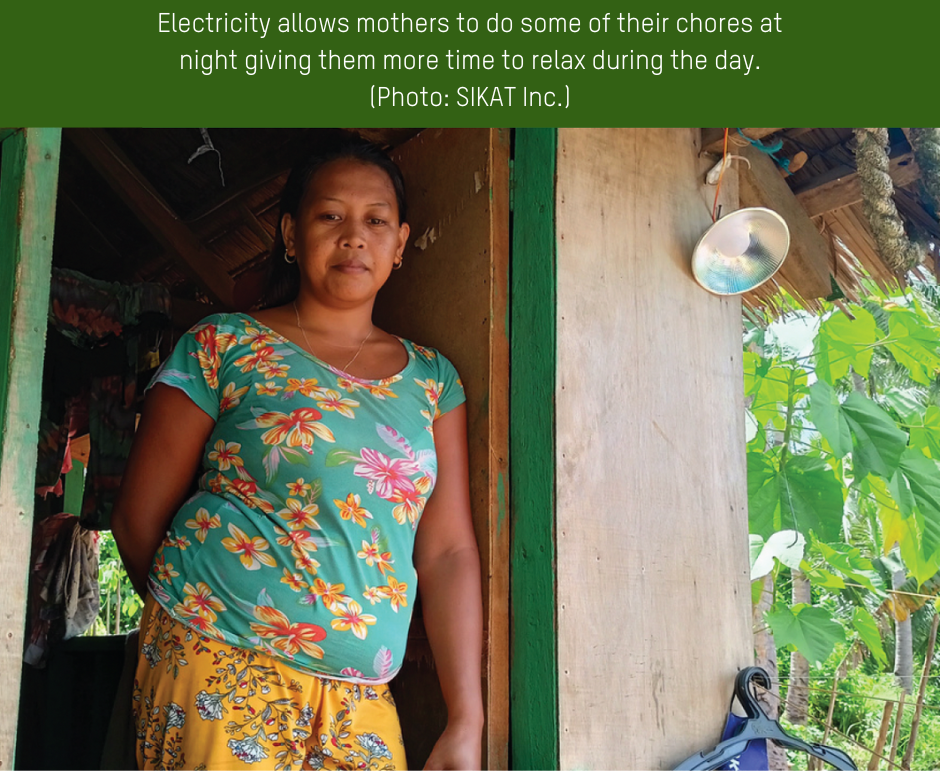 Angelica’s husband, Anecito, works as a fish loader at the fish port in the morning and as a fisherfolk in the afternoon.

Since the family acquired electricity through the solar-powered home system, Angelica said her husband, Anecito, has become more involved with care work. When Anecito returns from fishing at night, he now takes on the task of helping the children with their modules.

“My husband helps them with their modules, especially since it entails a lot of drawing that my husband is better at than me,” she said. “This also becomes their bonding time before they go to bed.”

While Anecito helps the children with their modules at night, Angelica can accomplish other tasks to ease her chores the next day.

“I would just sit down and fold the dried clothes  I washed during the day. It will eat some of my time if I do it in the morning,” she said.

Most of the time, Anecito’s catch from fishing is just enough for their meals. But when the catch is bountiful, Angelica and Anecito clean the fish during the evening so they will be ready for drying the following morning.

Since May this year, the couple has been able to dry five kilos of dilis (anchovy), which they exchanged for 25 kilos of rice from her relatives living in an upstream village in Can-Avid, the town adjacent to Dolores.

Angelica said she has been practicing the bartering of fish in exchange for rice with her relatives since their village is far from the sea, and her family cannot grow rice on the island.

Angelica calls her inclusion in the Just Energy Transition project an “unexpected blessing” since, for the longest time, her family has been using kerosene lamp to provide them light at night.

“My kids would complain that it is dark. We put the flashlight over our dining table when we have our supper. But since we always have fish as our dish, the kids would get pricked with fish bones,” she said.

“For us adults, we can bear it, but for the children, it is quite a struggle,” she said.

The family would buy kerosene every night from a nearby store spending P10 each time. Adding more expenses are the charging of other devices such as flashlight and mobile phone at P10 and their small battery connected to a radio speaker for P30.

Since the installation of the solar home system, things have changed in the home front.

“My children always get excited whenever we are about to switch on the light in the evening. They would always say that they are happy that it is no longer dark inside the house,” she said.

Angelica and Anecito decided to put a light on the unpaved pathway after an elderly neighbor tripped and twisted her ankle since the area was dark and had uneven paths. They also decided to extend the light to the elderly neighbor for free especially that she is living alone.

“This solar home system is a big blessing to our family. The least we can do is, too, share it with our neighbors who are also poor like us,” Angelica said. 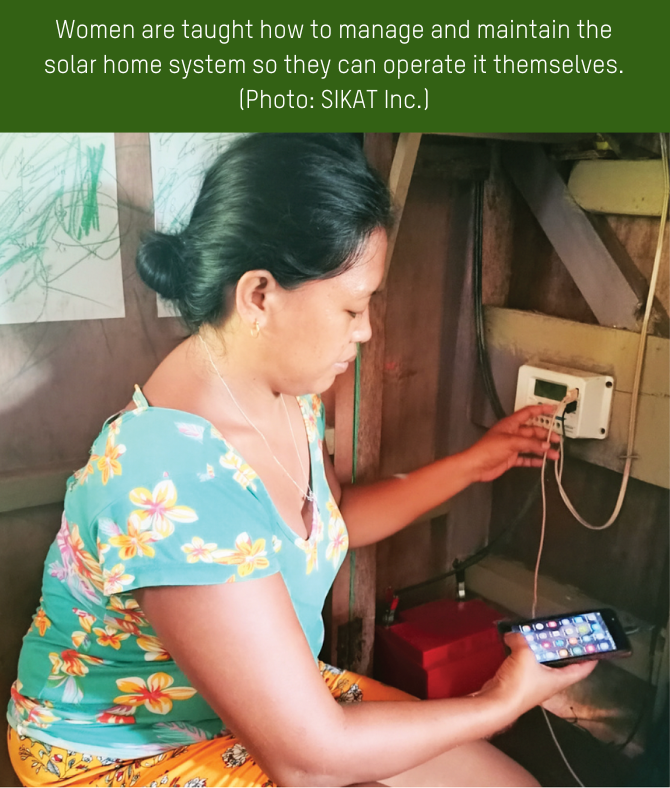