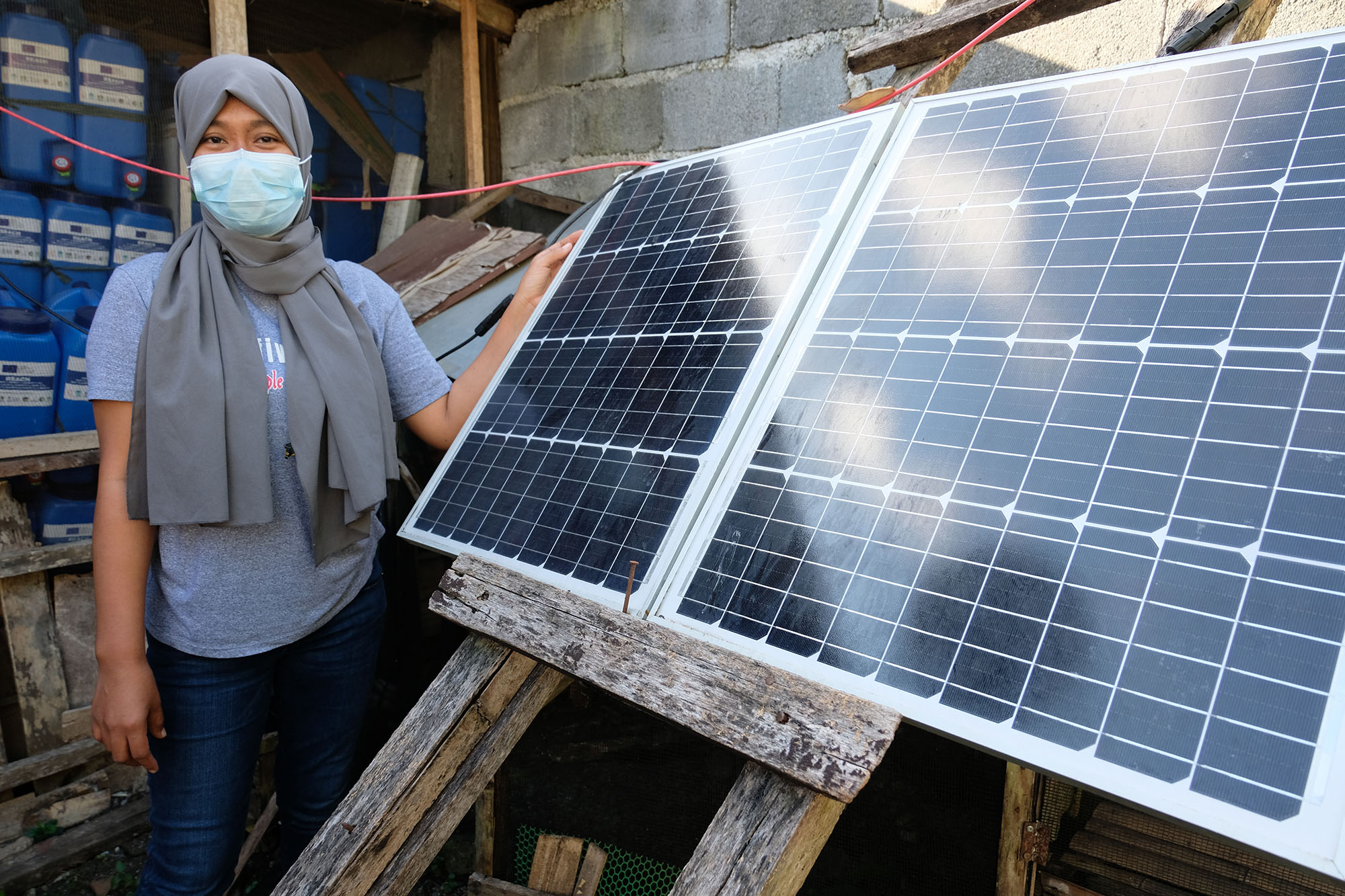 Ruhaida Mantawil, a community organizer for Community Organizers Multiversity, poses with the solar panels that power its portable generator set. The generator, which was funded by the REACH Project, is being used for data gathering and humanitarian field work in Mindanao. (Photo: Bong S. Sarmiento/ Oxfam)

With a number of communities and local tribes in Mindanao driven off of their land due to armed conflict, thousands of residents have repeatedly been displaced in provinces like Maguindanao.

In one town in Maguindanao, an indigenous tribe had to seek refuge in a makeshift evacuation camp due to land disputes. Like a number of evacuation sites in the province, the camp is unconnected to the power grid,

The lack of electricity not only made it hard for the displaced residents to go about their daily activities, it also made gathering information very challenging for local non-government organizations like Community Organizers Multiversity (COM).

Established more than two decades ago, COM is involved in community empowerment, dispute resolution, and peace and development efforts in Mindanao and other parts of the country.

COM had the idea of constructing a solar-powered generation system that would allow the group to sustain humanitarian work despite the unreliable electricity supply in the area. Edilberto Villaruel, Mindanao Coordinator of COM said the use of a solar generator was ideal also because in remote parts of Maguindanao that are connected to the power grid, electricity becomes unreliable when too many households are consuming power all at the same time.

COM was able to buy the needed materials through the help of partner organizations like Oxfam Pilipinas under the “Response to the Unmet Humanitarian Needs of the Most Vulnerable Conflict-Affected Population in Mindanao” (REACH) Project. Other members of the European Union Civil Protection and Humanitarian Aid-funded project include United Youth of the Philippines-Women, IDEALS, Inc., CARE Philippines, ACCORD Incorporated, and Action Against Hunger Philippines.

Ruhaida Mantawil, who has been working with CO Multiversity for six years now, said the solar power generator set proved very useful during the profiling of internally-displaced people (IDPs) in remote villages in Maguindanao who have been repeatedly forced to evacuate their homes starting 2019.

“Using solar energy is healthy for the environment. It is very beneficial to our work because in remote areas in Maguindanao that we serve, there’s no electricity or supply is unreliable. By bringing along our own solar power generator, we don't have to worry about that,” Ruhaida said in the local language.

Environmental groups have been pushing for the use of renewable energy such as solar to serve as an alternative to coal-fired power plants and other energy sources that contribute to the production of greenhouse gases. The accumulation of greenhouse gases in the atmosphere is among the biggest culprits of climate change, which is linked to drought, sea-level rise, extreme weather among others.

Ruhaida says that during their field work in evacuation camps, they’re no longer worried about their laptops and cellular phones getting drained. They can easily use the portable solar power generator to charge the gadgets.

By bringing the generator set and the two solar panels, their team would also no longer need to inconvenience the community with requests to connect to their electricity sources.

COM staff members gather information of the IDPs during their fieldwork. “The aim of the profiling is to keep a database of the IDPs so that we can provide life-saving assistance to those affected. The database can detect if there is duplication among the beneficiaries or their family members. In this way, all the families can get their much-needed assistance,” Ruhaida said.

Ruhaida said the portable solar power generation set is also useful during nutrition, health and hygiene education trainings or orientations provided for by the REACH Projects.

It can power a portable speaker system that is loud enough for a big crowd to hear. Ruhaida said it sounds better than a megaphone.

At COM’s field office in Cotabato, the solar power generation set is used to power three lights at night, allowing the organization to save on electric bills.

During power interruptions in the city, it also serves as an emergency power source for humanitarian workers.

The continued use of renewable energy solutions by Oxfam and its partner organizations like COM coincides with the theme of this year’s World Humanitarian Day. This year, we are highlighting the climate emergency, which is wreaking havoc across the world at a scale that the humanitarian community and people on the front lines cannot manage.

As we call on world leaders to put a stop to activities contributing to climate change, we are also pushing for the use of renewable energy and other sustainable solutions. #