MAGUINDANAO, Philippines – Sandiale Guiamandal heaved a huge sigh of relief after receiving a Manila envelope hand-delivered to their community composed of bakwits or internally displaced persons (IDPs) in the village of Pandi, Datu Salibo town.

Finally, after 46 years, he got his birth certificate just this year. 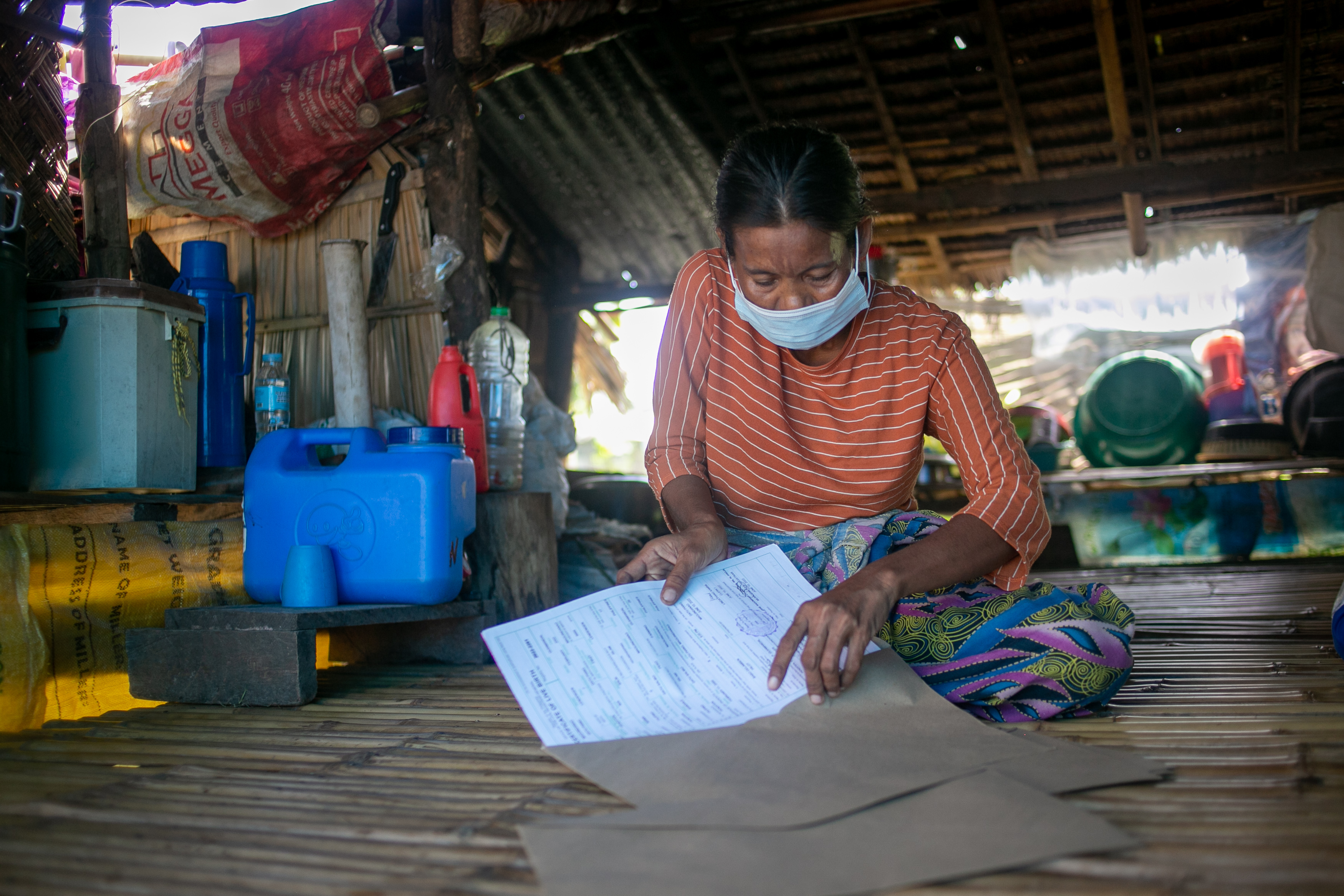 Naima Lendengan, wife of Sandiale Guiamanda, safe keeps the birth certificates of her whole family which they were able to acquire for free through the assistance of project officers of the REACH Project legal missions. (Photo: Manman Dejeto/Oxfam Pilipinas)

Born on May 7, 1976, Guiamandal placed the document close to his heart carefully like a treasured jewel, knowing full well that it is a game-changer for his life ravaged by armed conflict that forced him and his neighbors to flee countless times already.

“I was not accepted when I applied as a laborer in a banana plantation before because I don’t have a genuine birth certificate. My heartfelt gratitude now that I got my birth certificate and I’m very happy that my legal identity has been established more than 40 years after I was born,” Guiamandal said.

His wife and three children have also been issued certificates of live births by the Office of the Local Civil Registrar.

“Now I I’m no longer afraid to look for jobs suitable to my qualification and present my birth certificate if the employer needs it,” stressed Guiamandal, whose main source of livelihood ever since has been farming.

Guiamandal’s family and 70 other households have relocated to Barangay Pandi, Datu Salibo for more than a year now after they were uprooted from Barangay Penditen of the same town because of the armed conflict between the military and an armed group.

Datu Salibo is part of the SPMS Box, which also straddles the towns of Shariff Aguak, Pagatin (now Datu Saudi-Ampatuan) and Mamasapano. Over the years, the SPMS box has become a flashpoint between the military and armed groups , resulting to cyclical and protracted displacements among its residents.

Guiamandal recalled that during a clash between the military and an armed group in Barangay Penditen back in 2013 during the fasting month of Ramadan, he and two relatives almost died after being caught in the crossfire. Guimandal’s back was hit by shrapnel from an 81mm mortar fired by soldiers. Fortunately, he managed to receive a medical treatment and survived the ordeal that left him scarred for life.

His mother, Guiano Guiamandal, said they have been displaced countless times even during the the 1970s when armed groups waged an uprising against the government for the right to self-determination of Muslims in Mindanao.

“The armed conflict has made our lives miserable. Because of the decades-long war, my parents failed to get our family out of poverty. Getting a birth certificate then for us children was a least of their priority,” Guiano said through an interpreter.

“After several decades, I finally got my birth certificate for free. I’m really very thankful now that I acquired my legal identity. It will help me avail the aid that the government will bring to our communities,” she added.[EE1]

Her son Guiamandal appeared optimistic that his three children, with the eldest aged 10, can continue schooling because their birth have been officially registered with the Office of the Local Civil Registrar.

Two of Guiamandal’s children are in grade school, but the parents stopped them from getting educated because of the incessant reminders from their teachers to submit their birth certificates.

The pupils could not present their birth certificates since their parents failed to register them due to abject poverty. The birth certificate is needed to update the unique Learner Reference Number, a permanent 12-digit number assigned to a student while completing the basic education program, regardless of transfer to another school or learning center in the public or private sector.

“Now that we have acquired their birth certificates, there is no more hassle for them to comply with such school requirement. We want them to get educated because education is vital to getting better opportunities in life,” said Guiamandal, who completed only first year high school.

The legal missions to conflict-affected and disaster-prone communities in Maguindanao province that provide free birth certificates is part of the protection component of the “Response to the Unmet Humanitarian Needs of the Most Vulnerable Populations in Mindanao Affected by Conflict, Disasters and the COVID-19 Pandemic” or REACH 2 project.

Halid Kamidon, IDEALS project officer, noted it was not easy to convince the residents to avail the legal mission, afraid at first since most of them lacked documents to back their identities.

Communicating in Maguindanaoan language, the legal mission team patiently explain to potential project participants that they can still acquire birth certificates even if they lacked other documents, such as identification cards, as proof of identification.

Some ways to establish their proof of identity is looking at the documents or interviewing their immediate relatives, providing them with a joint affidavit of birth, or asking the barangay government to certify that they are bonafide residents of such village.

“If their apprehensions are cleared, all they need to do is authorize us and we would all do the legwork for them. All they have to do afterwards is wait – at no cost to their pockets. It’s totally free,” Kamidon said.

According to him, if Guiamandal, for example, will personally process his birth certificate and the certified true copy in security paper (SECPA) from the Philippine Statistics Authority (PSA) branch in Cotabato City, he would need to shell out at least P1,000 for travel, food and other necessary fees.

Fees include the payment for online appointment charged by local online shops at P200 per transaction and P155 for the SECPA from the PSA. The online appointment, however, does not guarantee the applicant can be serviced during the day, since the PSA in Cotabato City imposes a quota of 100 birth certificate transactions daily. So the cost will definitely go up for the accommodation and other overnight expenses that will be incurred by the applicant if he falls outside the quota. To fall within the quota, those from Guiamandal’s community will need to leave at 2:30 a.m. to become an early bird and stand in line as early as 4 a.m.

On the other hand, a birth certificate from the local civil registrar costs P350.

“What we have been doing through the REACH project is ease the burden of our poor fellows in conflict-affected or disaster-prone areas in acquiring their legal identities.

According to him, project partners took the task of helping individuals in conflict-torn areas in Maguindanao get their birth certificates because the lack of it forced many children to stop schooling, and prevent them from claiming government aid such as the poverty-reduction 4Ps or the Pantawid Pamilyang Pilipino Program, pension benefits of senior citizens, among others.

“It’s disheartening seeing children who have big dreams for the future dropping out of school because they don’t have birth certificates,” the development worker stressed.

A few years ago, Guiamandal, on his own, attempted to acquire a birth certificate, out of his desperation to find a job at a local banana company, which required such document for the hiring process.

He paid P150 for its processing and was so proud after getting the paper, only to be told later that it was fake, printed in a local computer shop using false entries.

It turned out Guiamandal was not the only one scammed with a fake birth certificate in his village of Barangay Penditen, 20 others had been victimized, some paying as much as P1,500 to the fraudsters, Kamidon said

For the legal mission team, reaching the communities means braving security threats, that’s why they are always closely coordinating with the military before proceeding, aborting the activity if security forces do not grant them security clearance.

The COLB are accepted as an employment requirement in local private firms while for government transactions such as driver’s license or passports for those planning to work abroad, a Secpa birth certificate is needed.

Apart from the fact that their parents were poor, many do not have birth certificates either because it was burned, left or lost during the countless times that they evacuated due to the armed conflict. One of these is Kudayang Talilisen, a widow with five children. The family also hails from Barangay Penditen but settled in Barangay Pandi, just like Guiamandal’s, because of the uncertain security situation in their village of origin.

“Our house in Penditen was destroyed during an airstrike conducted by the military against an armed group. Our birth certificates and the little belongings that we have were destroyed,” she recalled.

She noted that in the case of some of their neighbors, their birth certificates got lost in the many times that they were uprooted due to the lingering armed conflict in their community.

“We know the importance of a birth certificate; in fact, we really want to have copies of it. However, we can’t afford to have it because of sheer poverty,” Talilisen said outside their nipa hut.

She lamented that the local government unit had failed to come down to their community to render birth registration service.

“I really appreciate the REACH legal mission for reaching out to our community and helping us with our birth certificates,” Talilisen said.

She and her five children received their copies of birth certificates – delivered to them by the IDEALS legal mission team – with a grateful heart.

The village chief of Penditen, Jun Silongan, expressed the barangay government’s gratitude to the REACH project for providing his constituents their legal identity.

“It’s a huge help for many of them to access the help extended by the government and non-government organizations, especially during relief operations triggered by displacement due to armed conflict between the military and lawless elements,” the official stressed.

He confirmed that many of his constituents lost their birth certificates directly as a result of the armed conflict in the past several years.

“Some even lost their houses, burned down because of mortar shelling by the military to drive away the enemies. They lost everything in turn, including their birth certificates,” Silongan said.

He expressed hopes that children forced to stop schooling due to lack of birth certificates will resume their studies for them to have a brighter future – and to help maintain a stable peace and order condition in their communities.

Silongan noted that youth in far-flung areas have become easy recruitment targets for the lawless elements because of their little education.

“But once they’re better educated, our youths wouldn’t be easily lured into violent extremism that would augur well to our communities. Proper education can foster a culture of peace among the young,” he said.

For those in urban centers, a birth certificate may just be an ordinary piece of paper stored in drawers that they can pull anytime they need it.

But for the likes of farmer Guiamandal and the widow Talilisen, a birth certificate means more than just a piece of paper.

With the birth certificate as one of the tickets to enter school, it is like a torch that offers a beacon of hope for a better and brighter future for our children, they chorused.