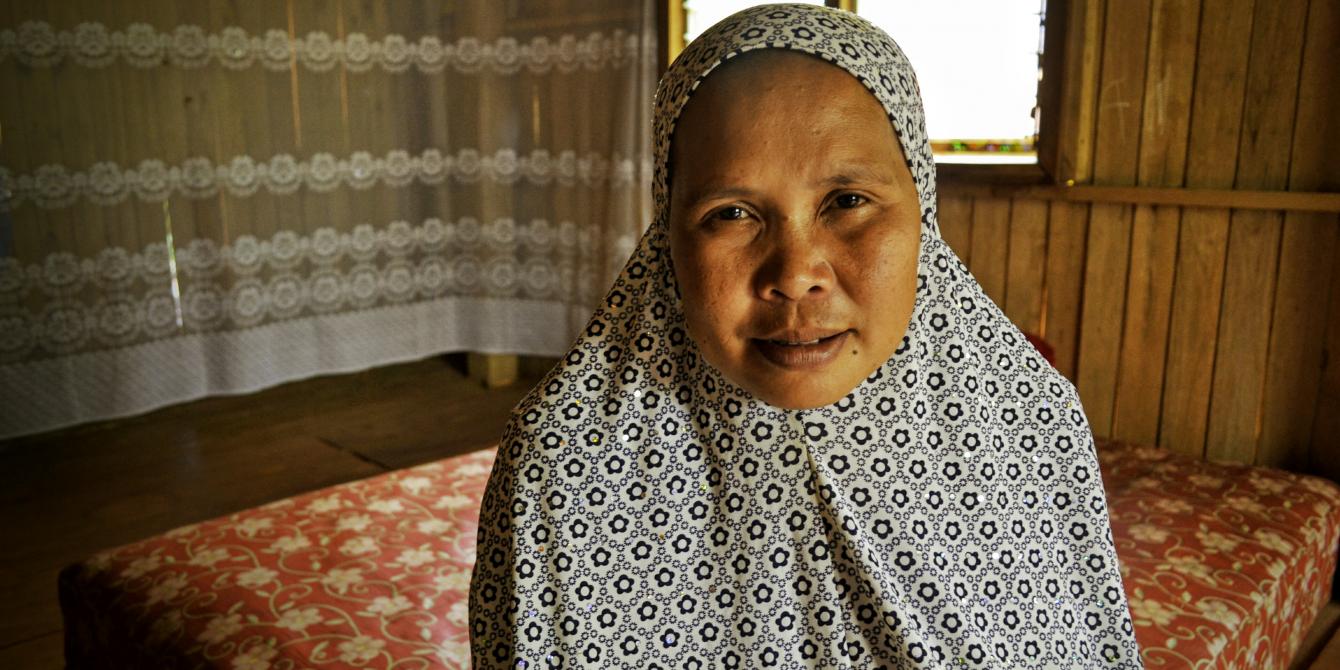 Sagirah Mante, mother of nine, shares: “I feel like I’ve never really known the world outside my home, outside the routine of doing the laundry, preparing meals for my family, taking care of the kids." (Photos by Rhea Catada/Oxfam)

Saguiaran, Lanao del Sur – It was barely even noon, but for Farmidah Ali it felt like it has already been a long day. The mother of nine spent the whole morning attending to the needs of her big family, including an 11-month-old baby. Taking a break from household chores, she joins other mothers in a weather-worn house in the rural village of Pamacotan. She wanted to share a new episode in her life: at 37, she is already becoming a grandmother.

This news did not surprise the other mothers of Pamacotan who joined her that morning. Like her, they took a break from a long tiring morning of cooking, washing the dishes, preparing the kids for school, cleaning the house, and doing the laundry. Like her, they are confined at home to take care of so many kids. They would not even overlook the possibility of becoming grandmothers before hitting the age of 40.

“In a few months, my second eldest daughter will give birth. She’s 17,” Farmidah went on, in the local Maranao dialect. She added that she herself got married when she was just 16. “Giving birth is tough. Raising kids, even tougher. I hope she doesn’t end up having so many kids like me. It’s very difficult.” 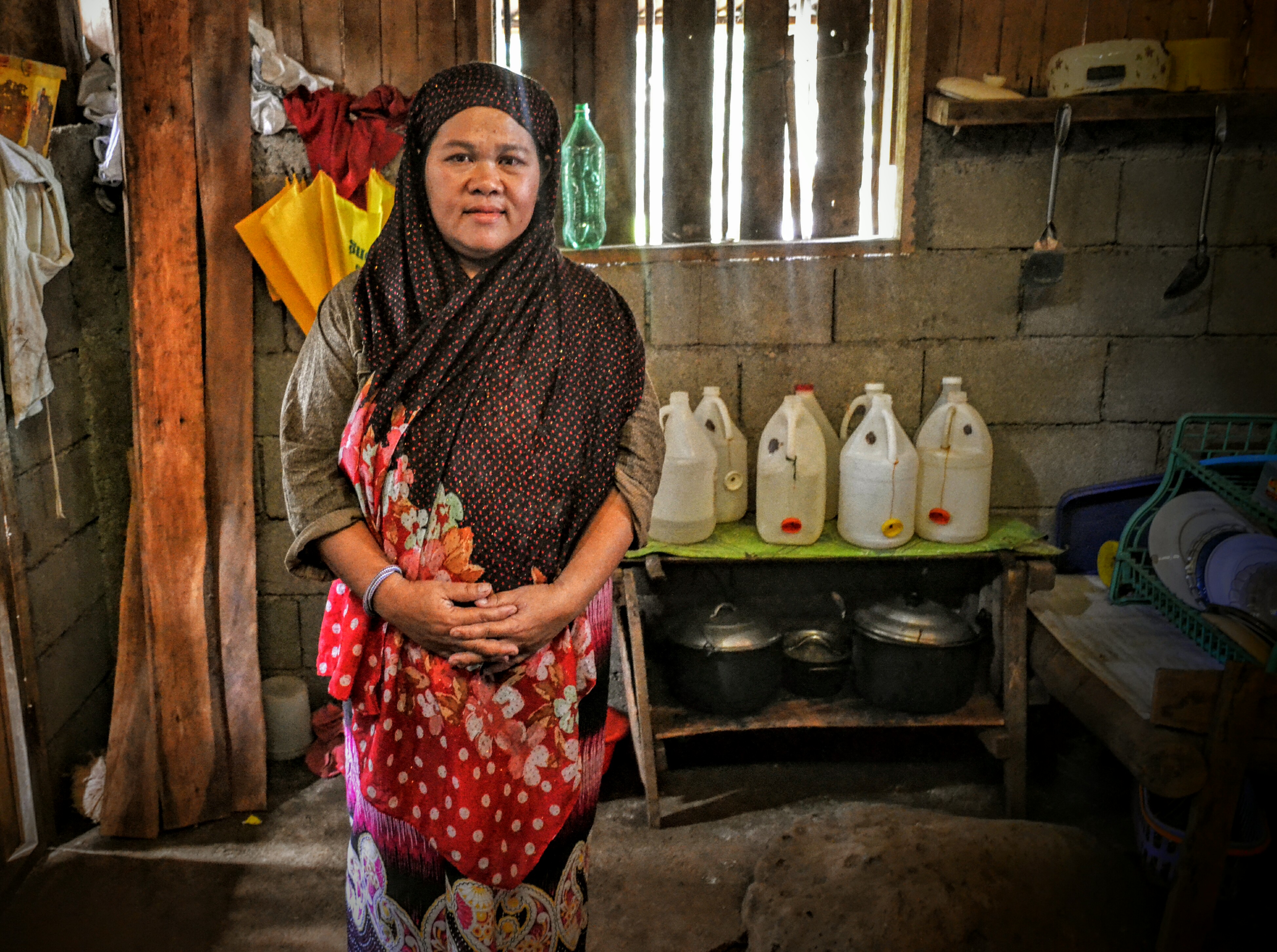 The experience of Farmidah and her 17-year-old daughter is nothing new in rural villages not just in Lanao del Sur, but across Muslim Mindanao where mothers take care of as many as 15 children, and teenage girls are forced to abandon school because of early marriage.

According to the 2013 National Demographic and Health Survey, married women in the Autonomous Region of Muslix`m Mindanao (ARMM) have the highest unmet need for family planning at 28%, double the NCR’s. This is a worrisome figure, considering that the ARMM has one of the highest poverty incidences among families at 54% compared to 25% in the country[i].  In this region, mothers have lesser resources to take care of their own health and that of their family.

“The income of my husband from farming is not enough for the family. I wanted to help him earn a living, but I have so many kids and they need me at home,” another mother, 40-year-old Sagirah Mante, shared. With nine kids and with not enough space in between births, Sagirah admitted that after her first child in 1999, her life has mostly been taking care of a newborn baby. Year after year.

“I feel like I’ve never really known the world outside my home, outside the routine of doing the laundry, preparing meals for my family, taking care of the kids,” she said.

A kilo of rice in exchange for childbirth services

In the largely conservative province of Lanao del Sur, women are often too ashamed to seek information about family planning or reproductive health services. Valuing their modesty, they would rather go for traditional means when it comes to matters concerning their bodies, including childbirth.

“I gave birth to all of my eight kids at home, with the help of the neighborhood panday (traditional midwife),” shared Salimah Salacayan Ampao. Salimah is from the small rural village of Sugod in Marawi City. “I feel less exposed when giving birth at home, plus it’s cheaper. I only give the panday a kilo of rice and PhP500 (US$10) in exchange for her services.” 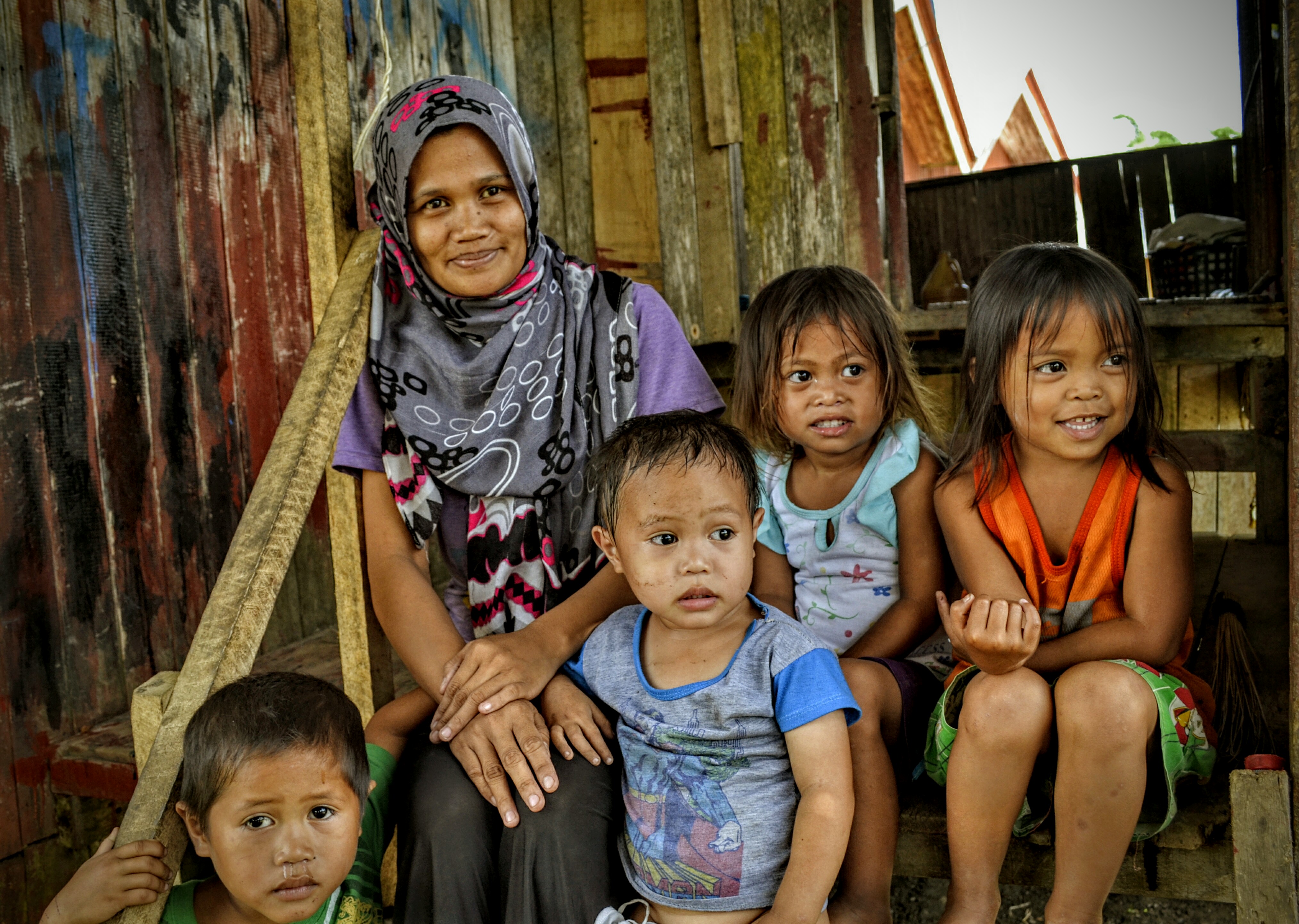 “So many women here would much rather go to the panday than a professional health worker. This is not just because of the cost, but mostly because they feel it is easier to entrust their privacy to traditional midwives,” said Nassimah Omar, a 28-year-old sexual reproductive health (SRH) nurse in Lanao del Sur. “As much as possible, we encourage women here to go to the health centers to give birth, especially those with high-risk pregnancies, such as: women who already had many children, or women who are either too young or too old to give birth.”

Nassimah leads other SRH nurses from the local women’s organization Al-Mujadilah Development Foundation, Inc. (AMDF) to promote family planning and SRH services among women in the municipalities of Marawi, Saguiran, Balindong, and Bubong. AMDF is currently in partnership with international aid organization Oxfam for the Improving Availability of Reproductive Health Services in ARMM project or ARCHES.

“Compared to the rest of the country, the ARMM is lagging behind in terms of reproductive health,” said ARCHES project manager Lizel Mones. “This underinvestment and lack of promotion of SRH services in the region is largely because of the long-standing armed conflict in ARMM and the deep-seated cultural norms and misconceptions about reproductive health.”

ARCHES is a five-year development project of Oxfam, funded by the European Union (EU), that aims to protect the rights of women and girls, and address the gaps in the delivery of reproductive health services in the region. It is being implemented through a partnership with national and local civil society organizations in 29 municipalities across ARMM, including areas in Central Mindanao, and the islands of Basilan, Sulu, and Tawi-tawi.

Working with the women of Lanao del Sur

Every day, Nassimah and her team are working to challenge traditional misconceptions on reproductive health. She said that it is an uphill battle, considering that there are people from the same neighbourhood who discourage the women from availing of reproductive health services.

“The very conservative ones would tell women not to listen to us nurses. They would insist on their beliefs or misconceptions about the use of contraception, like how it can make women promiscuous, among others,” said Nassimah. 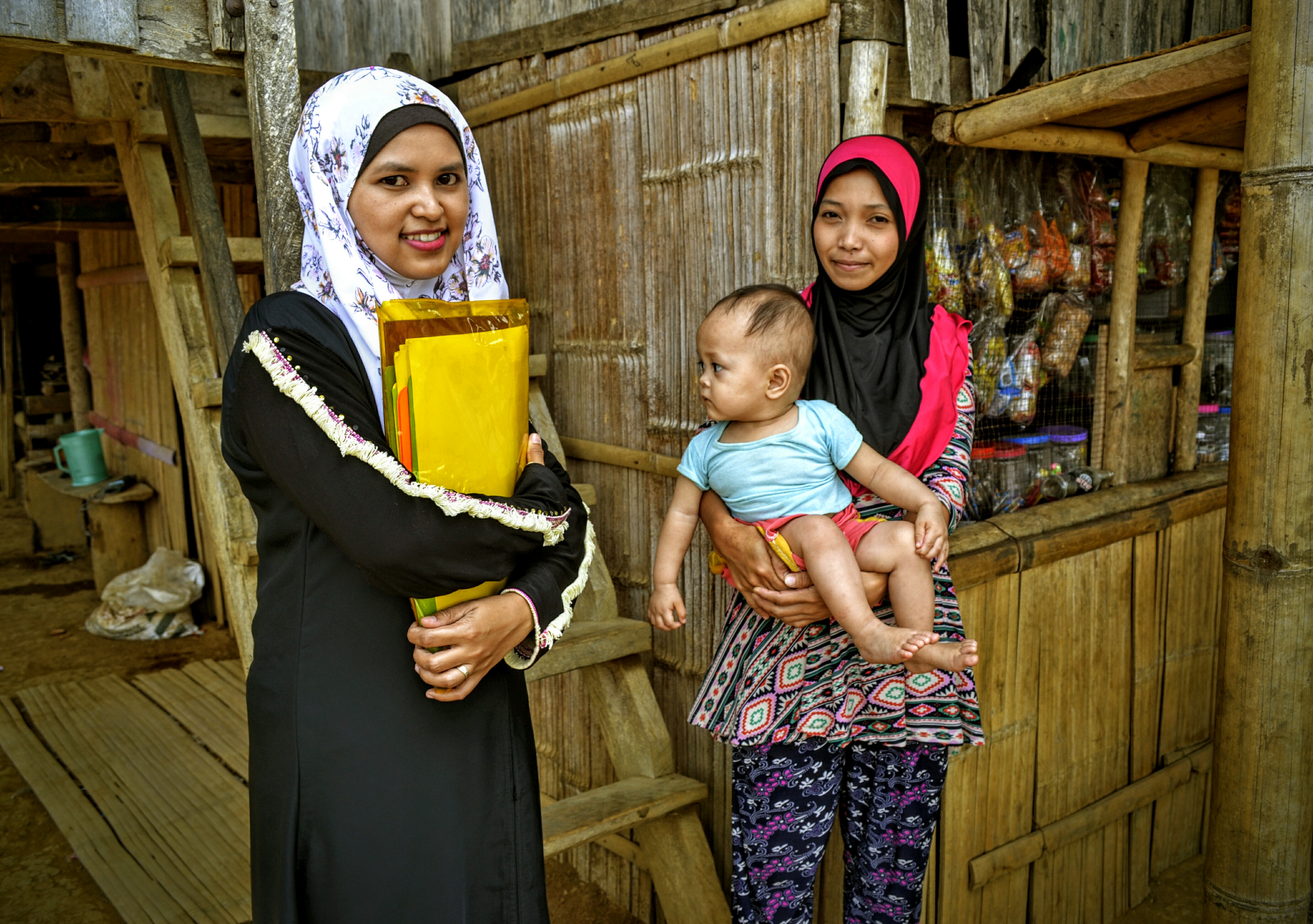 But despite the challenges, Nassimah and her team would persevere on educating the women of Lanao del Sur. They would help out health care workers, midwives, and nurses from rural health units (RHU) in providing services to the women. Sometimes, they would go from house to house to explain SRH and educate households on family planning. They conduct information and education campaigns to raise awareness on \ sexual and reproductive health  Those who have developed an understanding of the benefits of family planning taking care of their reproductive health would go to AMDF’s office to avail of free services and contraception, such as Implanon, a a form of  birth control implant.

“It’s very important for (my fellow Maranao) women to have access to reproductive health services,” said Nassimah. “Here, where a lot of women give birth every year, pregnancy becomes a risk to their health. Moreover, family planning is very practical. Since they will no longer be confined at home to take care of a large family, they will have time to earn their own money and not be too dependent on their husbands. Women will be empowered.”

Since the ARCHES team started working in Lanao del Sur in April last year, more and more women are seeing how family planning and sufficient SRH services can improve the lives of families. This includes women like Farmidah, Sagirah, and Salimah, mothers with as many as nine children who availed of free  contraception from SRH services delivered by the ARCHES project. For them, it’s never too late to look forward to a life where they can have more time for themselves, and even earn a living.

“For now, I will focus on my youngest, my one-year-old child, but when he’s older and he’s already going to school, I can also work in a farm just like my husband. I can finally earn my own money,” said Sagirah. “Now, I don’t have be afraid of getting pregnant again. I feel more free because I will no longer be just confined at home.”

ARCHES is a joint undertaking of Oxfam, Philippine Legislators’ Committee on Population and Development, Philippine Business for Social Progress[1] and four women’s rights organizations (WROs) who have long been working with local communities in ARMM, namely: Al Mujadilah Development Foundation, Inc. (AMDF), for the province of Lanao del Sur; Pinay Kilos (PinK), for Sulu and Basilan; Tarbilang Foundation, Inc. (TFI), for Tawi-Tawi; and United Youth of the Philippines-Women (UNYPHIL Women), for Maguindanao. The project is being funded by the European Union (EU).

[1] PBSP and PLCPD have yet to  become formal partners.