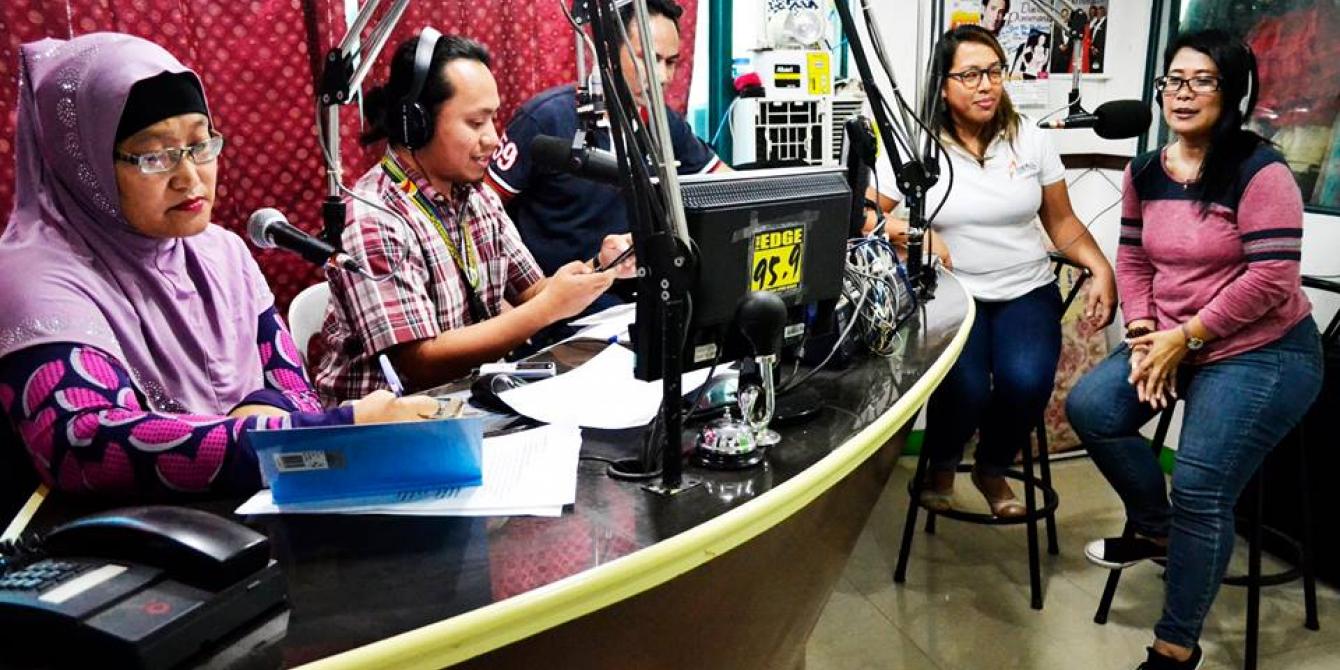 They refuse to be silenced by the terror that has rocked their hometown, Marawi City.

In Iligan City, where thousands who fled the armed clashes have sought refuge, two displaced Maranaos are using their voice to reach out and help others like them, through a radio program airing over the city’s top radio station. To date, around 380,000 people have been displaced by the Marawi crisis. Following this massive displacement is a spate of misinformation online, adding to the worries of the affected civilians.

“During these times, it is important for us to stand up and say something. With this radio show, we can inform our ‘co-displaced’ their rights during this crisis. It also provides an avenue for us to heal psychosocially,” said Sorhaila Latip-Yusop, one of the hosts of the two-hour radio show S’bang Ka Marawi. “Upon witnessing the horror unfolding, the natural reaction would be to be paralyzed because of shock. But in the end, you will realize that we should take on active roles in helping each other survive this.”

S’Bang Ka Marawi is taken from the Meranaw term “Sebang Ka Marawi” which means “Rise Up, Marawi.” The Initiatives for Dialogue and Empowerment through Alternative Legal Services (IDEALS), in partnership with Humanitarian Response Consortium and OXFAM in the Philippines, launched the program to provide a platform for dialogue between people and the authorities. It is also a way for internally displaced persons (IDPs) to raise their concerns.

“The show delivers news on security and the status of the affected areas. It also informs the listeners about the programs that they can avail from the government,” said Atty. Aileen Almora, Project Head of IDEALS’s Access to Benefits and Claims after Disasters.

One of the show’s most popular episodes revolved around the glaring concern on IDPs’ identification cards. According to Atty. Almora, many of those displaced left behind their IDs during the attacks.

“The need for a legal identity is highlighted during times of disasters, specifically when issues of security are in place. Having a legal identity is not just a basic human right, but it also has a multiplier effect because aside from their passage along checkpoints, it also gives them access to benefits and claims,” said Almora.

Almora emphasized that more than relief goods, people affected and displaced by the conflict need to know accurate and relevant information, including their rights as IDPs, available services, and accountabilities of both government and humanitarian aid agencies. No one sees this need more than the radio show’s anchors themselves.

“As displaced persons ourselves, we have a firsthand perspective of what other IDPs need,” said Atty. Sharief Salic, Sorhaila’s co-anchor. “We are lucky to have resources to help out the most vulnerable sectors who are affected by the crisis.”

Tune in to S'Bang Ka Marawi every day at 3pm to 5pm on The EDGE 95.9 in Iligan City and on Facebook @sbangkamarawi.